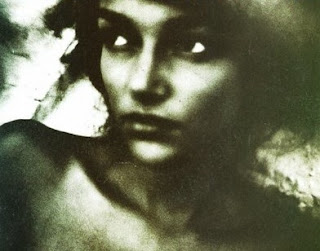 I've fallen so hard for so many of the Black Phoenix Alchemy Lab fragrance oils that it will take me at east a month to really dig into the nature of their appeal. It's a curious line, and I'm sure more than a few fragrance lovers have dismissed them out of hand. How do you classify what they're doing? The volume of their product inevitably seems suspect. The oils themselves often smell crude in the bottle, giving very little if any indication what stories they'll tell on the skin. The image is decidedly Goth, and those who don't view that sub-culture as a harmless, even quaint relic of pre-internet suburban disconnection suspect that its exclusivity isn't imposed but self-ordained, implying an active hostility toward outsiders. For various reasons, Black Phoenix is approached with a preconceived set of dismissals, a phenomenon which can be felt on makeupalley, the pink hues and girly splendor of which would seem diametrically opposed to BPAL's sensibility, like the jock's girlfriend bewildered by a goth peer's heavy eyeliner.
Go to the Black Phoenix forum and you get a totally different impression. Every BPAL release is discussed there, sometimes passionately, often heatedly. Far from sycophantic, the reviews display a wealth of opinion which quickly dispels the stereotype of the Goth as conforming nonconformist. The people who (sometimes lazily) get grouped under Goth aren't a select few--but as author Poppy Brite might tell you, they're a fantastic audience, often as discerning, committed, and articulate as the majority is fickle and indifferent. Part of what bonds them together is the ability to look beneath surface impressions. One way of looking at heavy black eyeliner is to view it as a shorthand. Dismissing the person underneath without going much deeper saves the wearer a lot of time.
But this is all sort of philosophical, suggesting that the Goth sensibility is purely cosmetic and, ironically, superficial, a theoretical exercise. Another way of looking at black eyeliner is: it's gorgeous. Bands like This Mortal Coil aren't thesis papers. They make fantastic music, rich in sensory detail, a sonic gift to the listener. To say they're not for everyone is kind of beside the point, really. As much as I love so many BPAL scents, there are those I can't get behind (March Hare comes to mind). What exactly is for everyone? Certainly not Black Annis, and I won't waste time trying to convince fans of the department store fruity floral to give it a whirl (instead, I recommend Jezebel or Sacred Whore of Babylon) but I do want to bring it to the attention of those who might just truly love it, as I do.
Black Annis is as interesting as just about anything I've smelled from a niche line. Maybe more so. Its challenges are more viscerally palpable than those supposedly presented by more widely known fragrances like Oud 27, Pathcouli 24, Boadicea Complex, Parfum d'Habit, and Rien, to name just a handful off the top of my head, while, for all that, going nowhere near the assault which is Secretions Magnifiques. Black Annis takes something of an adjustment. Like the majority of BPAL fragrances, the smell given off of the bottle is no real indication of where this scent will go; likewise, the list of notes. Try to wrap your mind around damp cave lichen, vetiver, civet, and annis. The combination is something you can only really experience.
On skin, the initial impression isn't much easier to describe. What starts to emerge for me immediately is a fantastic interplay of opposites, what I call barnyard gourmand. I get chocolate and hay, particularly, with a leathery anise chaser. In the spirit of concision, the nearest analogues to this effect are Heeley's Cuir Pleine Fleur and Molinard's Habanita. Black Annis is at first much darker than the former, but they dovetail at certain stages of development, chiefly around this sweetened hay aroma. Habanita is powdery par none, but it too adjusts more gourmand influences with something smokier, resulting in a peculiar density unique to these two scents. After a heady intro, Black Annis softens down to something above a skin scent. Not all of BPAL's fragrances do. Many retain that early vigor.
Though there are comparisons to be made, I've never smelled anything quite like Black Annis. The first several times I smelled it I alternated between disliking it and loving it. Mostly I disliked it. I think that's because it doesn't operate the way most fragrances do, the way I'm conditioned to believe they should. I wasn't looking past the black eyeliner, maybe. I highly recommend getting to know this stuff. All of the BPAL oils come in 5ml apothecary bottles and can be ordered from the website. They're also available as testers.
Posted by Brian at 1/02/2010 10:47:00 AM

I wonder, has BPAL improved their shipping times and solved their consistency problems? I got into them when they first started (they have a huge following on the Lush NA board) but my enthusiasm petered off when I realized that not a single FB I bought smelled like the scent I loved in the imp!

I'm afraid I can't speak to shipping lags. I've ordered three times from BPAL. The last time was several days ago. Before that, it took about four days, and that was counting Christmas. Way back when, I ordered Zombi. I don't remember how long that took to arrive, which must be a good thing. The BPAL site says:

"Please note that all orders, including domestic orders, are currently taking an excess of 14 - 21 business days to process, pack and ship out due to a heavy workload, the process of hand-blending and the nature of our product. Please refer to the Shiny and New section for more information about current ship times."

It seems with indie perfumers that consistency can be a challenge. I remember ordering Cafe Noir from Ava Luxe after having smelled a decant. It smelled wonderful, but the startling lavender note I loved seemed to have been neutered. I was disappointed but it didn't surprise me. I'd heard things--not about Ava Luxe but about using natural materials, how one batch can be slightly different, depending on suppliers or even, what, I don't know, mother nature?

I ordered a bottle of Monk from Michael Storer after, again, enjoying a decant, and was shocked at how different it was. The bottle I received was sort of a ghost of the Monk I fell in love with. I contacted Michael and he was incredibly friendly and forthcoming about it. He'd been trying to work out a problem with the formula, something to do with color and aging. I was given a refund and an alternate bottle, which was as I remembered.

On the other hand, the bottle of Tabac Aurea I received from Sonoma Scent Studio was identical to the decant I'd sprayed dry. Same with the bottle of Underworld I ordered from Liz Zorn.

I've never purchased from BPAL based on an imp so I'm no help there either! I've always bought blind.

nice one, brian. this is like a public service announcement or something.

haven't heard anyone speak of this mortal coil in sooooo long. off to dig out my worn out cassettes and vinyl from 10th grade.

ps. my word verification is "lichan"

So glad to see that you're posting about BPAL! I found them around 2004, and fell in love instantly, though I don’t necessarily love all of their scents. I believe that they were the first company to really push the boundaries of what perfumery is supposed to be, and they are certainly the first and best of their kind. Even when a scent of theirs doesn’t work on me, I appreciate the daring and the artistry that goes into the creation of their scents. It takes a lot of balls to compete in this industry with scents inspired by horror stories and dark poetry! They have a great sense of humor, too, which is wonderful to see in an otherwise quite stuffy art form. Very much looking forward to their spring erotica line.

Certainly a company that would appeal to fans of Messe de Minuit, Rose de Nuit, Vetiver Oriental, and Chergui.