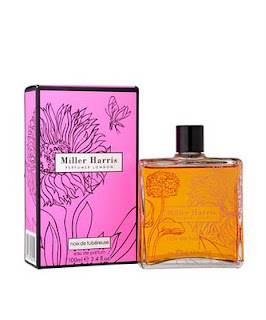 I'm guessing that with more of an online search than I'm willing to conduct right now I could find out what's up with the Miller Harris line being discontinued in the states. I know it's at least being liquidated at Bloomingdales, where I got a few bottles at half the usual price. The pickings were slim--I came to the sale late--but I did get Noix de Tubereuse, which interested me more than some of the others. I'm a fan of L'Air de Rien (and how) and had intended eventually to get Noix, but so many other fragrances at that price point spoke to me a little more urgently.

It could have something to do with the company I was keeping when I first smelled Noix at the counter. I sprayed some on and it gave her a headache. Of course, almost every perfume gives her a headache, but knowing this, tuberose was an evil move. At the time, I was inclined to agree with her: it smelled like an older lady's perfume. It's the knee jerk reaction to tuberose. But as we roamed the mall, my opinion changed. Noix seemed much fresher than any tuberose I'd smelled. It lacked that heavy resinous bombast which seems to anchor so many of its peers; yet it wasn't transparent, either.

The addition of mimosa really does magic on tuberose. Some have called this candied. Others say bubblegum. I get neither. For sure, the mimosa sweetens the mix, giving it an almost edible slant. Violet sweetens it further. I get the green notes, which come off like snapped stems. But it's the mimosa I smell more than anything for a while. Smelled from the bottle, this seems more like Noix de Mimosa.

That note really never goes away, but the tuberose does gradually emerge more emphatically. Noix goes powdery; not overwhelmingly, it's still too damp for that, but it's there. The best part of the fragrance is the buttery drydown. I can't think of a tuberose fragrance I remember having this quality in quite the same way. There's a creaminess to Noix. It remains bright but has that buttery warmth of something darker. I often feel when I smell a tuberose fragrance that I have too many already, and so many of them are so similar. I would never say that of Noix de Tubereuse. It's truly that miraculous rarity, a contemplative tuberose, quiet and thoughtful. Nothing is weighing too heavily on its mind.
Posted by Brian at 1/24/2010 11:32:00 AM

noix is made from tuberose leaves , not the blossoms and is lovely !!
I hadn't heard Miller Harris being discontinued...I may have to hoard the stock I have in my boutique !!
Fleur Oriental is my fave . Have you sniffed it ?

Pity you got to the liquidation sale late, there are a number of MH scents it would be nice to pick up cheap. More Rien never goes amiss. But yes, I wonder why they are getting out of the US?

I have Noix de Tubereuse, I bought it when I got Jasmin Vert. Now, of the two, I'm more likely to wear NdT. I find it a tad over the top at first, but you're right about the drydown.

But why were you perfume shopping with someone who gets headaches from it? Was it an accident? ;-)
I must admit, perfume-headache people make me cranky. I always suspect them of learned hypochondria, as I do those who insist they are allergic to scent. I get that too much in a closed space can be unpleasant, but some people seem to clutch their pearls at the merest whiff of Joy!

I'd heard that, Carol. I've never smelled the leaves or the flower. Very much like Fleur oriental. That was the other I got. Does have similarities to Shalimar but (God strike me dead) I prefer it, unless we're talking Shalimar parfum, which has no comparison. I like the dry down of Fleur a lot.

Rien all gone. Jasmine Vert was another I wanted. And the fig. Sigh, etc. The friend is an old one, sans pearls, and I've always found her weird aversion to perfume...well, weird. And it was a bad idea to go with her but she was my ride and I had one day in town, and we were spending it together, and there was an Anthropologie store nearby, which she WAS into but gave ME a migraine. Not so feigned, either. My friend Bard swears that people who cry allergy to scent are full of it. Hmmm...

Ah, I see - yes, the circumstances were conspiring against you... ;-) If you got a ride, you have to dance with the one who brung you!

No JV or fig either? That's bad luck. But FO is nice, though I don't have that one - yet.

Hmm, Anthroplogie looks a bit like Laura Ashley to me. Apparently we have an Anthroplogie store here (I had no idea!) but I've never been there.

I think Bard has a point. OK, there are people who are sensitive to some ingredients, so they can't wear scents with them in. But how can people be allergic to stuff that isn't even touching their skin?
Migraines, maybe - but I think for every person who genuinely gets a migraine from strong perfume (I've never known one), there are probably many more who say they do, when really they just don't like it, and it's a control thing. Thus you get workplace bans. And there was a story last year of a bank being evacuated because somebody 'sprayed strong perfume', and everybody started fainting. Afterwards the authorities admitted it was all hysteria, there was nothing actually wrong with any of them. Learned hypochondria, they said.

Brian, your post explains why Sephora online no longer carries the Miller Harris line. Unbelievable and so sad, IMO. Noix is my favorite of the MH line. To me it has a distinct L'Origan vibe, and I love Noix b/c of that. So glad to know it has lots of other fans.

Your friend Bard makes a good point. I'd agree with him.

My next half off sale is Feb 1st if you need some Miller Harris
( just sayin'...)
let me know and I'll save you a bottle !!

Unknown said...
This comment has been removed by the author.
September 27, 2010

Miller Harris is available at MiN New York! [They are the new distributor for North America.] There is a shop in SoHo and you can get their edit collection too on http://min.com.