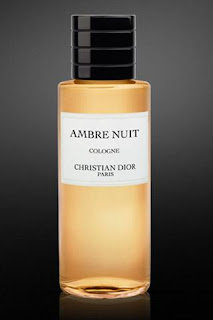 The fourth in a series of colognes initiated and originally curated by Hedi Slimane, one time bad boy at Dior, Ambre Nuit had some steep competition. Cologne Blanche, Bois D'Argent, and my favorite by far, Eau Noire, were basic but rich, presented in almost industrial looking, over-sized bottles. They were made to be worn generously, using a grade of ingredient which made a little go a long way. The colognes were hard to find and filtered out into the market the way niche lines do, primarily by word of mouth. The perfumers involved delivered some of their best work, indicating the kind of artistic freedom a niche line typically provides. Bois D'Argent was Annick Menardo at her best, revisiting themes and motifs she'd explored more commercially in Hypnotic Poison (also Dior), Bulgari Black, and Body Kouros (Yves Saint Laurent). Francis Kurkdjian hadn't done much at the time, unless you consider how many units two of his earliest creations, Gaultier Le Male and Narciso Rodriguez Her, moved off the shelves. His Eau Noire remains, for me, the most skillfully imaginative use of the immortelle note in fragrance, and was ample indication, way back in 2004, that Kurkdjian had the strength of vision and a recognizable enough fingerprint to create his own line.

Slimane had strength of vision too, and helped to make Dior Homme stand out in a marketplace where name alone increasingly mattered less. Perhaps he was a bit too visible. He left Dior in 2007, and the indication until now was that the line, at least vis a vis fragrance, lost not just the sense of vision he'd provided but any vision whatsoever. Their next moves seemed more like stumbles. Dior Homme Sport, while perfectly nice, was a fairly insipid flanker to Polge's brilliant Dior Homme. Packaging it in the same bottle seemed majestically ill-judged. It was hard to imagine pale, pencil thin Slimane on a treadmill, cigarette dangling out the corner of his mouth; intentionally or not, this was the picture Sport drew. Fahrenheit 32, also perfectly nice, was either a step back or a standing in place.

Until now, the cologne series languished. It lay so still I thought it was dead. Word of Ambre Nuit filled me with cautious dread. Surely the world could do without another synthetic amber. They'd already taken the edge out of Dior Homme, grafting a little red racing strip onto what felt like a spaceship by way of a Bentley. Surely someone with the freedom to use his head realized that bastardizing sleepers this way did the line as a whole no favors, whatever the immediate gain by association. Maybe the series was better off dead, but no one seemed willing to protect its grave from vandalism.

There was every reason to expect the worst, and things beyond Dior have gotten equally grim, especially in terms of masculine fragrance, so the quality and pleasure of Ambre Nuit isn't just a surprise but a real blessing. To call it cologne is an understatement. Like the others, Ambre Nuit lasts better than most toilet waters. It feels and smells rich and textured. The clear liquid is packaged in honey-colored glass. It sits comfortably between masculine and feminine. François Demachy has created in Ambre a spiced rose which makes as much sense on a woman as a man. And what a rose. In an interview with the Fragrance Foundation, he listed rose as an exact scent he would one day like to capture. "Just when you think you know everything about [it], there are always new things to discover," he said. Ambre Nuit isn't by any stretch a photorealist rose. It doesn't aim to be, but it feels like some kind of discovery along that path Demachy is traveling.

In the same interview, he admitted he has yet to master the use of cumin in fragrance. While admitting it can work wonders, he hasn't discovered the right proportions. I don't get the sense there's cumin in Ambre Nuit, but it offers ample evidence that the perfumer uses spice notes carefully and intelligently, practicing restraint where others exercise indulgence. Ambre Nuit feels just right in any number of ways, resulting in an infinitely satisfying wear. The dry down doesn't offer much development. Ambre Nuit is in the end what it was from the beginning, a song you play on repeat all day because you love it so much. There are resins in there, those spices, rose, a nice, mellow amber. The fragrance has the soft feel of leather to it, adjusted by woods and patchouli. It isn't a show-stopper. It isn't incredibly cutting edge, though it is without a doubt more interesting than 99 percent of its mass market peers. It strikes an interesting, precarious balance. Demachy addresses the need for vision as perfumer at Dior, but seems well aware of the need for the walk along that tightrope.

Dior is a context, ultimately, and any story Demachy wishes to tell must somehow serve to advance that larger narrative. He's interested in refining parts of the story, essentially. "I'm not saying I have a particular vision of perfumery," he says, "but at Dior certain types of perfumes are expected and, most of the time, created." What the brand has sometimes lacked is more of a hand-crafted feel, in his opinion. Despite their current vogue, perfumers aren't an elite but an imaginative group of skilled artisans, assigned the responsibility to create not just effect but substance, a synergy between the two poles. More personal, hand-crafted products might not sell very well, but they provide a backbone of quality and in their own ways provide subtext to the brand, adding detail and nuance to the sweeping plot points of the master narrative which is Dior. Ambre Nuit shows a lot of respect to the line but has the good sense to demonstrate some amount of idiosyncrasy as well. What it adds to the story is character.
Posted by Brian at 2/03/2010 09:42:00 AM

"A spaceship by way of Bentley." I love that.

Did someone say rose-amber? Off to investigate...