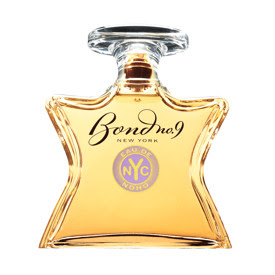 Few things are as exciting as being gifted a fragrance when you’re an avid scent junkie. Brian bought me a perfume that not only had I never heard of; I’d never even sniffed. It was Bond No. 9 Eau de Noho. The beauty of it was that I sprayed Eau de Noho (EdN) without any preconceived notions whatsoever. I had no idea what I was about to smell , no clue if it was floral, oriental or gourmand (and if you read me, you *know* how much I try to avoid preconceived notions!).

Eau de Noho, without knowing the notes, started off reminding me of Jean Patou’s Vacances. It is delicate, softly green and innocently floral. At first I thought I was smelling green lilacs and violets in a meadow of fresh spring blooms. After about 10 minutes the morning fog passed and I realized I was smelling linden. Linden! One of my all-time favorite notes. Linden is such a cheerful, naïve, fresh girly-girl scent and I have never found a fragrance focused on it that lasts more than an hour. I have Jo Malone French Lime Blossom, D’Orsay Tilleul and L’Artisan La Chasse aux Papillon and these are all beautiful but far too fleeting. D’Orsay Tilleul is my favorite and during really swampy humid summers in New Jersey I recall carrying around a decant in my purse to re-spritz all day long. Eau de Noho is the only linden I’ve ever worn that projects (a little) and lasts for hours.

I can’t tell you how touched I was that Brian found a linden fragrance for me and kept it quiet until I opened it! Bond has another fragrance called Nuits de Noho which is similar in name but entirely different. Nuits is closer to Thierry Mugler’s Angel with zero linden in sight. I can’t believe no one ever talks or writes about EdN. After wearing it a bit and swooning all over myself I looked EdN up online to find linden not listed among the notes. No matter, this is still the best linden fragrance I have ever encountered bar none.

If you have a fondness for linden fragrances you ought to try EdN. Like all linden scents, there’s a slight cucumber effect here, a vegetal, leafy-green-garden-shoot- in-early-spring vibe. I still remember the few times I’ve smelled actual linden blossoms and it’s blissful. Eau de Noho should be the sleeper hit of the summer (and summers past). Only problem is, I don’t think it’s even that popular. It ought to be one of the more well-known Bond’s, I need to spread the word, for those who love linden, try Eau de Noho.

Fragrant friends rule. I am so lucky to have found Brian.

I'm surprised Bond No.9 isn't more popular in general. They have several fragrances I've come to love, Nuit de Noho being one of my favorites. I agree Eau de Noho smells linden-ish and lasts longer than La Chasse aux Papillon. Andy Warhol Success is a Job in New York, Park Avenue, Chinatown and Bryant Park are all quite lovely, unique and wonderfully composed scents.

Thank you for this tip. I'm guilty of snubbing the Bond range in general...there's just tooooo many to sniff. That being said, I do love Chinatown, and Saks New Orleans is on my radar....as is EdN thanks to you :-)

does anyone know where to get Tilleul? I am down to my last few drops

Does anyone know where I can purchase Tilleul? I am down to my last few drops....

Another underrated Bond No. 9 is New York Fling. Bergomot, cardamom, freesia...what's not to like?

You've made this sounds LOVELY. I dont' know where to even sniff Bond No. 9 in London - must find out where I can give it a quick sniff.

You're right, it's a marvellous fragrance. I love Nuit de Noho as well, but Eau de Noho is perfect choice for spring and summer. My other all time favourite is So New York.

I too am a Linden-lover, and white my inability to smell the (probably) reformulated La chasse Aux Pappillons, I have been trying to find another scent...

Guess I have to procure myself a tester of Eau de Noho!

I'm also looking for d'Orsay's Tilleul though -- I adore beeswax, which is supposedly in the drydown...

Lately I've realized that the note which most often irritates my nose is bergamot -- I find it too aggressive in most women's scents (although I love it in Eau Sauvage), and so probably won't enjoy Bond's New York Fling...