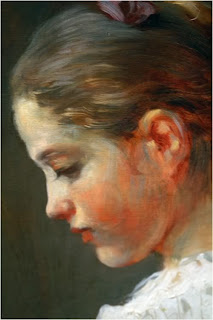 I'm not going to embarrass myself by telling you how many fragrances I have, but there are enough that in order to get to the ones in the back of the cabinet I need to take everything out and rearrange. Meticulously. And increasingly, this is no easy task. I think of it like a Rubik's Cube. Many get rotated. I get sick of them for a while, or discover something I'd forgotten. I bring one forward like a stepchild I've neglected out of unfair bias. There are a few, only a few, that remain front and center, where I can get at them regardless of whim or weariness. Exclamation is one of them.
I have no idea why I like this stuff as much as I do. It's not a complex scent. It isn't breaking any new ground. It's simply a gorgeous boost of happy, which is why, on this dreary, muddled Monday morning I want to talk about it. The stuff cuts through the drizzle with the precision of a scalpel on skin. It has a distinct buoyancy to it that I'm hard pressed to find anywhere else. The smell lifts me a little. I think of it primarily as peachy osmanthus and rose with minimal foody accents (cinnamon, vanilla, almond). Nothing new there, but give three cooks the same ingredients and you get three entirely different meals, and if one of those cooks is Sophia Grojsman, Exclamation's creator, at least one of those meals has the very real potential to rise above and beyond its ingredients to far more than the literal sum of its parts.
For many women, this is a nostalgic scent, more sweet than sophisticated. I don't remember Exclamation from my high school years, so there's no such sentimentality for me. How anyone smelled the stuff with a wall of Poison, Paris, and Giorgio in the way is something which would have to be explained to me with scientific lucidity. Setting that aside, I'm not sure I've smelled anything by Grojsman which could be realistically assessed as anything approaching quaint. Exclamation is rich and fairly heady. I continue to think of Grojsman as a major sensualist, and Exclamation does nothing to contradict that evaluation. There are others working somewhere in this vein, with a corresponding richness of sensory detail which could probably be described as super saturation--Francis Kurkdjian and Maurice Roucel, to name just a few--and for a while I wasn't sure what exactly distinguishes Grojsman from them. I'm still not sure, but Renoir comes to mind as a useful means of comparison.
Those two perfumers are full bodied, but Grojsman produces something close to the kind of figures Renoir painted, where the flesh is rendered with a weirdly palpable succulence, and the colors used are more like texture than hue. In some ways it's hard to approach Exclamation as an expression of sensuality, but I suspect most of that is context. Put it in a different bottle, one that isn't a silly if adorable little piece of punctuation, a play on shape and words, but more formal, something by Baccarat maybe, and place the bottle in a different environment, a bit farther away from Shania Starlight and Bratz berry lipgloss, change the name to I don't know....Rapture,maybe...and you're apt to see Exclamation in a very different way.
There's a powdery disposition to Exclamation that isn't baby talcum and comes much closer to the wonderful cakey make-up of Malle's Lipstick Rose. The two have a lot in common. I love Lipstick Rose but probably prefer Exclamation. Lipstick Rose is a much vampier shade of lipstick, a notch or two more garish. Exclamation has a softness to it. Grojsman's work is often faulted for a certain synthetic or chemical quality somewhere in the top notes. You would expect to find that in something as cheaply made and sold as Exclamation. Instead, it's one of her most natural smelling efforts. You can find the notes on Fragrantica but I'll list them here, because I looked for them a long time wondering what they might be. Peach, apricot, bergamot, orris root, jasmine, heliotrope, lily-of-the-valley, rose, vanilla, cinnamon, sandalwood, amber, musk and cedar. Like much of Grojsman's work the fragrance is mostly linear. It does soften considerably into the dry down, where the base notes are a little more pronounced. It last better than most perfumes ten times the price.
Posted by Brian at 2/22/2010 11:23:00 AM

Is the current edition of Exclamation the one you love, or are you speaking of vintage? I really like it that you frequently write about fragrances that others seem to ignore.

uh oh, I don't know Queen. I hadn't thought of that. I just looked at the box, and it seems pretty new based on the list of ingredients. Then again, the drugstore where I purchased this has many older bottles for some reason, older formula Samsara, Fendi EDP. I bet the older Exclamation was even better, richer still. I'm glad you enjoy posts like this. Few niche perfumes are as reliably pleasurable as a good old frag like Exclamation. I try to write about things I wish I'd been able to find someone talking about when I first started getting into fragrance.

BTW, I see that you like Bette Davis. I just read a great book about her, only 120 pages long. It was written by David Thomson and I bet you'd enjoy it. You might look for it on Amazon.

Ooh I will look for that book. Thanks Brian!

You wrote "Few niche perfumes are as reliably pleasurable as a good old frag like Exclamation." Yaaasss...The niche wonders I've been sampling lately have mostly made me glad I didn't buy a bottle.

When I worked for an advertising agency Coty was one of our key clients and I remember hearing about Exclamation. Not sure if I've ever smelt it though. You make it sound like it's a reassuring fragrance. Will try it.

Exclamation, Sand & Sable, and Giorgio wafted through MY high school halls. You smelled the occasional Opium-wearer, too, but the "popular" girls wore Giorgio. Oddly, no one wore Paris (and Poison didn't appear until I was, ahem, in college). I didn't even smell Paris until last year!

While working on my NaNoWriMo manuscript, it came to me that one of my characters would have worn Exclamation, so I stopped by the drugstore to refresh my memory. It may have been tweaked a bit - I don't remember it smelling as powdery as it does to me now.

It's still nice, though: a pretty, cheerful, fruity rose-violet, like Paris' cousin in trashy clothes. It does smell like a cheap formula to me, not that that bothers me. I spent over half my life wearing Cheap Drugstore Perfume.

I have a sneaking fondness for Exclamation, but I wouldn't wear it now; it's too reminiscent of lockers and homeroom for me. Other people should wear it, though!

Exclamation is one of the few 'drugstore perfumes' you can still find in the UK. Back in the day, there were shelves in Boots The Chemist filled with Lentheric, Yardley, Coty, Jovan etc. But nowadays, it's just Impulse body sprays, Charlie, and the myriad variations of 'So'. I wish I had a time machine and could visit the Boots of my teenage years...

But I digress. I rather like Exclamation, too - but I don't own it anymore. I have so many perfumes, I feel guilty when I use the cheapies instead of the expensive ones! Is that odd? ;-)

Exclamation was the scent of Jr High for me. I wore Sand and Sable.

oh my.. i never thought i would see a review of exclamation on the same perfume blog that reviews annick goutal and YSL heheh. my friend wore it heavily in junior high so it will always remind me of taking the school bus home and hanging out at the mall. i still remember the commercial and the hot pink bottle! i think we were too poor to afford department store perfume and so i thought of exclamation as a poor man's escape. hee.