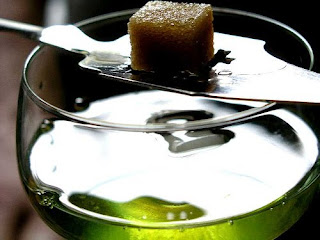 Abigail and I often think along the same lines. We split L'Animale over a month ago, and though I loved it instantly, and we've talked about it some since, I kept forgetting to write about it. This week I started thinking about it again. I wore it two days ago. All morning, I reminded myself to sign on so that I might put it into words. It's hard to put into words, as Abigail (aka Birthday Girl today) said. It's beyond words in certain ways for me. I read a review of L'Animale and the other two in the trio of HDP's tuberose-themed fragrances on Grain de Musc where Denyse seemed able to put all three into words (is there anything this fantastic writer can't put into words), and Abigail's done a decent job too, so what's my problem?

I think part of what stymies me lately when it comes to writing about perfume is that in a lot of ways I don't always feel so wordy about fragrance. It's not something which prompts me to immediately start looking for a vocabulary in my head. I value that part of smell which falls beyond words and the intellect, and I like to spend some time gestating with the fragrance. More often than not, after this gestation period I'm further beyond words, and the scent has entered some psychic space of mood and memory. What leads me to blog is wanting to communicate about fragrance in general. I like talking about it. I like hearing what other people have to say. I like our giveaways because people come out of the woodwork and this can feel like something close to a conversation. But I don't often like narrowing any fragrance down. And the posts I do best are free-associational.

Along those lines, I considered discussing some of my favorite green scents. By green I mean the color of the juice, not the category. Some fragrances make perfect sense in green: like Yendi, which is a cut grass aldehyde. Others should be green and aren't, like Givenchy III or Jean-Louis Scherrer. Stick with me here. Others make sense in an unusual way. Think of Eau Noire by Dior, which isn't "green" in theory but feels so right, so apt, when you smell it and look at it simultaneously. The color registers emotionally. Are so many scents amber and clear because we expect them to be, and imagine something must have gone wrong if they aren't? I suspect green feels so right to me in the context of Eau Noire partly because a green fragrance is unusual to a point approaching decadent--and Eau Noire has some pretty decadent pleasures: rich, almost savory but sweet too, like sex on skin.

L'Animale has immortelle in it, as does Eau Noire. The color of the fragrance is greener still. It seems even weirder in the case of L'Animale because the Histoires perfumes, though there aren't a ton of them, are all pretty predictably hued. When my bottle of L'Animale arrived it was thrilling to see that shade of emerald, not brilliant but swampy green, through the bottle. It was almost like a warning. The most shocking thing was how little like tuberose the thing smells. Tuberose you say? Oh really? It totally caught me off guard, which is a fantastic way to experience a perfume.

Unlike Abigail (and a lot of other bloggers, judging by the sometime hostility toward the line), I've been very impressed and smitten with Histoires de Parfums overall. Some could have better longevity, but this is a constant issue for me. My favorites are Noir Patchouli (hold up, also green!) and 1740 de Sade. De Sade is a good comparison, one I made the moment I smelled L'Animale. In fact, L'Animale seems like a more androgynous version of 1740. Both focus on immortelle. 1740 is intense, the same way Angel Liqueur and Malle's Une Rose are, with the near-syrupy density of a tawny port someone's been storing in a dark cask for decades.

Denyse from Grainde Musc smells the tuberose eventually. I never do. I might not be looking too hard. I don't ever smell the tuberose in Vierges et Toreros by Etat Libre D'Orange, either. I smell wet dog and rubber (don't assume I don't love this smell). L'Animale feels like a sweaty scent. Something your body would make of a more delicate perfume after a night out dancing in a tropical climate. It seems old--not vintage necessarily, not the way people mean "vintage fragrance". More like something stored in a crypt, some special elixir with dangerous properties meant for the right hands.

Another thing I thought of when I saw and smelled L'Animale was a trip I took to Barcelona once. You couldn't get Absinthe anywhere else but, I think, I don't know, like, Prague or something? Someone will correct me if I'm wrong. You can get Absinthe all over now, but it doesn't have wormwood, which is what I was told made it outlawed. Only a few places in the maze of old town Barcelona served Absinthe at the time. We spent an entire evening looking for it, searching with the kind of manic zeal I usually reserve for the perfume counter. When we found it, and drank it, and were in some head space I hadn't entered before and haven't since, and couldn't really put into words (here we go again), I looked at the green residue in my glass and thought how perfect the color was for the sensation of the liquor. L'Animale has the same kind of vaguely clandestine mystery about it, and I can picture someone pouring it into the bottle over a cube of sugared immortelle laced with who knows what.
Posted by Brian at 3/25/2010 02:52:00 PM

I love the way you talk about perfume - most of the time I feel like I cannot put into words what I feel for different scents (at least not coherently or anyway near to what it feels in my head).
Happy birthday to Abigail!

Um, I'm sorry...I'm a little confused...see, I could swear I just had an experience where somebody quite eloquently used words to take me to a place where perfume and ideas merged, perhaps a little beyond the realm of intellect and language...

Now, if I could use my own clunkier "pen" to say Yes! I know what you mean by color matching the idea of a perfume, not necessarily the fragrance "family" or notes. I'm going to be potentially unclear in demonstrating that by conjuring Nikki Saint Phalle. In the blue bottle. Parfum. Snakes. What it does to me. How viscous it is. Sometimes I feel like it's a mash-up of potions from a Chinese herbalist and a wood witch. That beautiful cobalt bottle...and green not brackish not syrupy but some thing that isn't entirely different should be inside.

scentself! How weird. I spent an afternoon on Wednesday filming perfume bottles. We couldn't get enough light and had to move the table closer to the window, and looking at the monitor I thought, THIS is how perfume is supposed to look, shot through with ambient light. I was shooting this for the movie I'm editing, which has a lot to do with perfume and memory. When I remember perfume, it isn't just the scent but the feel of the bottle in my hand, the way it captures light. Seeing them this way, on camera, reinforced that for me. The shots we did are such fantasies. Perfume sitting out in daylight, right by an open window. We laid huge peonies (pinks, white, with yellow and orange centers) all around each bottle. I can't wait to get them into the film. I'm excited to show the film to perfume lovers.

Oh--and Nikki, yes. That bottle and the color is so evocative and tied up in the smell.

Thanks, Ines. I'm trying to get OUTSIDE my head a little more these days. At some point last week I reminded myself that posts don't just automatically transcribe from my mind to the blog.

Cool post! I always think, illogically, that a deeply colored perfume should have a correspondingly rich and concentrated smell. Conversely, lighter colored perfumes always make me think they should smell lighter/fresher than they might actually...there's some cognitive dissonance when my expectations aren't borne out.

I would love to display perfumes in the sun, but I've read that extended light exposure can damage the components. I hide them away in my closet instead. I'm sure they'd survive the occasional photoshoot, though...food for thought!

I love the coloring in that picture! Your breakdowns of perfumes is amazing, thanks for posting!

We went to Barcelona this fall, and I remember it had a distinct scent that I kept trying to put my finger on...

About the absinth though... I am afraid that the stuff you drank in Barcelona and Prague was nothing even close to absinth... (and I say this as someone who deeply loves Prague and cares for Barcelona)...

Prague never had an absinthe culture, and after the Velvet Revolution some enterprising soul tried to sell even more romance to the tourists and so started brewing up what they called absinthe, but which was nothing more than wormwood vodka. Not even in the same ballbark as the subtle and complex original... I am afraid that the stuff from Barcelona was similarly inauthentic.

The real stuff is Swiss -- yes, it originated in Switzerland as a sort of elixir -- and wound up being banned as a result of a murderous rampage in Switzerland. Absinthe was blamed, but in truth it was the high alcohol content and not the wormwood. Still, thujone content, the active part of wormwood, is legally limited in absinthe in Europe. (as a medicinal remedy, it has long been given to pregnant women).

(definitely the drink for a lover of perfumes...)

oops -- that anonymous was me, Monika, Brian!

Monika! I never saw your comment. How is that? Thank you for the absinthe link. I'm going post haste to check it out. I wonder what it was that I did drink over ten years ago.