A Tale of Three Hyacinths 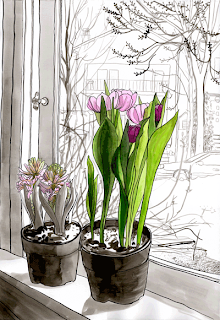 'Tis that time of year when we look at our perfume collections for something that reminds us of an early spring day. The usual suspects for me are Vacances, En Passant, Un Matin d’Orage (along with several other AGs) and YSL Y.

However, there is a particular note that calls my name (very nearly shrieks at me) this time of year and it’s hyacinth. I have three fragrances where hyacinth takes center stage, two I’ve worn for years and one I found only last year. They are Guerlain Chamade, Annick Goutal Grand Amour and Parfums MDCI Un Coeur en Mai. There are days when I wish I could wear all three at once, because they’re similar but easily unique enough that I want that rush of whatever it is each delivers.

Recently I bought several potted hyacinths to create a display in my kitchen. I always like to have a bunch of hyacinths together so their scent wafts around and makes an impact. The flowers themselves are a little ugly but if you group them together in a basket and add some moss, stones and ribbon it becomes a beautiful tribute to spring. It was when I was creating my hyacinth display that I sniffed the blooms and realized Chamade, Grand Amour and Un Coeur en Mai do truly honor the scent of hyacinth.

Chamade is the most heavily aldehydic of the three and the one where I think the hyacinth note is most abstract. Chamade is one of my very favorite Guerlains and while I’m usually an edp type, I prefer the edt with this one. Chamade strikes me as the scent I’d wear to an outdoor spring wedding, an occasion with some formality.

Grand Amour is the most naturally lush and true to nature. Grand Amour seems the easiest to wear; it’s a smidgen sweeter than the other two and wants to take me out for a picnic on that first blissfully warm and sunny day in March.

Un Coeur en Mai is the greenest, mossy and rosy-fruity of the three and in some ways seems a combination of Chamade and Grand Amour, like the middle child. UceM is a bit heavier on the aldehydes than Grand Amour, but it’s still a realistic interpretation of the scent of early spring blooms, lily of the valley and hyacinth.

If I had to choose my favorite of the three I’m hard-pressed to pick between Grand Amour and Un Coeur en Mai. I think GA and UceM are tied for first place. I love Chamade but it would place third, mostly because I prefer big floral-aldehydes in winter but not so much when I’m looking for something to represent early spring. Early spring is a time when I want to experience nature close up; when I long for vegetation and growth after several months of winter and I’m less enthused by the abstract and instead thrilled by the sweetness of mother earth.
Posted by Abigail at 3/07/2010 11:49:00 PM

I love the smell of hyacinths too - in Sweden it's a traditional Christmas flower rather than a spring flower, so I'm used to the scent mingling with gingerbread, Christmas tree and mulled wine. I used to get a lot of hyacinth from the topnotes of Chamade, but only the very first topnotes, then it turned into mostly carnation, which I don't like at all. Last time I tried, it was pure carnation from the start. My favourite hyacinth fragrance is L'Artisan Parfumeur's sadly discontinued one. I've also smelled one by Il Profumo which I recall as a little sweeter but still pretty true to the real thing. If you ever go to Berlin, Harry Lehmann has a hyacinth single note as well (which I stupidly didn't think I needed at the time, despite it being dirt cheap)

I don't get a lot of hyacinth out of my Chamade, which is pdt. Might be the concentration thing, though.

Haven't tried the other two, although I think I'd love them. DSH does a straight-up "Dutch Blue Hyacinth" that is beautifully spicy-floral.

Drat, Abigail! Now you've got me wanting to try AG, which is much cheaper than UCdeM, though that is very beautiful, too.

Hi Abigail, which do you prefer in this AG, edp or edt?