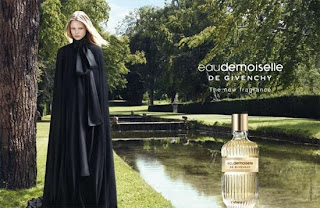 A bird flew into my house this week and stayed for 2 days. I think she was a female house finch. She chirped and sang to us both mornings at sunrise. We have very high ceilings and she just flew from ceiling fan to light fixture to nicho* and seemed perfectly happy for the 2 days she visited. I miss her now that she’s gone (*nichos are recessed spots in the walls of adobe homes where one places art). And, since you’re wondering, she didn’t poop anywhere. I looked all over and didn’t find a single mess.

I broke my toe. It killah hurts and now I won’t be able to wear cute shoes for a few months. Drat.

Givenchy Eaudemoiselle has piqued my interest. Love the ad imagery (see above), who doesn't long to wear a neck to toe black cape on a sunny day? What’s cooler than a perfume ad without skin? [although, it kinda ruins it for me when I think Givenchy is playing to the vampire obsessed teens/young adults who love the stupid Twilight books/movie. True Blood rules. Twilight sucks.]

Big Love seems to have jumped the shark this season. But it’s still a guilty pleasure. I can’t believe there’s only one episode left.

I absolutely despise the term Cougar.

I also despise the term Curvy to describe women over size 4.

I started using pure emu oil on my face. I’m having a hard time with the fact that this is oil of emu, you know, the big ostrich-like bird in Australia. When I apply it I swear I smell poultry fat and become gaggity.

Annick Goutal Eau de Fier arrived this week. My goodness! ...what an usual scent and especially for Goutal. I’m fixated on it. It’s an edgy blend of birch tar, rubber, smoky black tea with a dash of salt and hints of citrus. Eau de Fier is not something you’d wear to the office, but I love, love, love it.

I found this little ditty about mimosa blossoms on Fragrantica and thought I’d share:

I found the above quote because I was looking for reviews of Hermes Caleche Fleur de Mediterranee. HCFdM is supposed to have noticeable mimosa but I don’t detect it. To me, it’s a big beautiful aldehydic floral, like Guerlain Liu, but not much ado about mimosa.

Someone besides me needs to tell Chanel they are having problems with their Les Exclusifs bottles. Both Brian and I have experienced major leakage when we've purchased brand new bottles shipped directly from Chanel. Just this week I received yet another Les Exclusifs bottle that had leaked about 1/3 of the jus all over the box. I know it seems crazy, these gigantic bottles give the impression of being able to survive a nuclear bomb, but there are problems. I called Chanel and now I have to ship back my defective bottle and once received they will send me another. Major Pain in the Ass.

and, on that note,

Abigail, I bought a harvest edition at 50% off last summer at KADEWE in Berlin. They had the 200 Amarige Mimosa (gorgeous!) and Organza.

I saw the newest editions the same summer in Paris' Le Bon Marche. Maybe worth trying those places?

MRT (My Randon Thoughts)
Sharing similar catholic school backgrounds my friend and I were accustomed to Latin, Mediterranean, southwestern architecture that displayed The Virgin Mary in recessed spots in the walls of churches, schools and wherever. We didn’t know these things were correctly labeled as nichos. We made up our own term and called them ‘virgin holes.’ We know how immature that sounds but it’s our familiar funny moment.

Big Love is the best! Can’t decide which sister-wife I like best or who is more like myself. Ya know, just like Sex in the City. I have more in common with Charlotte.

Became a fan of True Blood later in the season. Must re-visit from the beginning. Never tried Twilight. Never will. One panned review in the LA Times was enough warning for me.

Yes, the term cougar sucks. Not included in my “vocab.” Love your word ‘gaggity,’ and must find an occasion to use it.

Eau de Fier sounds absolutely intriguing. Hope this one has some staying power, as most Annick Goutals don’t with me.

The Harvests turn up on U.K E:Bay so maybe you will find a seller there who ships abroad ?

About 8 years ago, a Carolina wren got into our house and was there for at least a day. Even now I'm not sure how the bird got inside. It did poop once, amazingly enough, onto a plastic bag I was using to try to shoo it out of the house. But that was it.

I'm very disappointed to read about the Chanel Les Exclusifs leakage. Not good at all. I've been toying with the idea of springing for a vat of 28 la Pausa, but for the time being I'll continue to think about it instead of actually doing it. You're right. What a pain. Are they paying your return shipping?

Frankly, I keep hoping Chanel will introduce its Exclusifs line in smaller sizes. And now I can add better bottles to the list.

Have a nice weekend.

I finally had a sniff of Les Exclusifs last week. I thought some of them were very nice, but I can't justify buying one. The bottles are just too damn big, not practical when one already has more perfume than one can use. And they leak, too? That does it. If they leak that badly in transit, I'd be afraid they'd be prone to evaporation, too.

Agreed about True Love vs Twilight. The only thing I liked about the first movie was the soundtrack. I really can't be bothered to see New Moon. I think I would laugh too hard at R-Patz' sprayed-on abs in his shirtless scene!

As you know Abigail, I'm in the UK.
Harrods is easily accessible to me. I'm also registered to shop online with them (the buggers DO have a lot of exclusives....)
So, would you like some help getting the Amarige Harvest 2009?

True Blood rules! :)
Sorry to hear about your toe.
Btw, you sent me on a quest for older harvests and it is definitely turning into a serious quest. :)