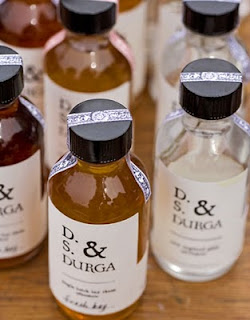 I got a chance recently to smell some of D.S. & Durga's limited edition fragrances, and I liked them enough that I'm now pretty curious about the entire line. There's an overall sense of mystery about the brand, which seems deliberate, like the perfumers are trying to stay out of the way. You can read the website for background on the duo behind the company, but the gist of the official story seems to be that D.S., a musician, and Durga, an architect, fell into perfumery the way one falls into an unexpected hole out in the yard, as though they hadn't seen it coming. This, along with the delicate botanical drawings featured on the website and on the packaging itself, makes the pair sound like something out of Beatrice Potter, characters who traipse through dewy green forests until some little stone appears to guide the way into ever more magical territory. Even the descriptions of the perfumes are somewhat whimsical. Here's the type for Royal Purpure:

"A fragrant study upon the Heraldic tinctures of medieval Anglo-Saxon families of Devonshire and Cornwall."


I have no idea what this means, but meaning doesn't seem to matter. Clearly, it's more about mood and tone. D.S. & Durga are sending up (I hope) Victorian apothecary culture the way a band like Arcade Fire appreciates the imaginative rhythms, look, and feel of the post-industrial gazette or early Sears Roebuck catalogs, creating a world of impressions bigger companies can only think to ape by employing skinny-legged models to sit on phallic objects with their skirts open.

The pair have a quiet indie sensibility which feels more like Portland to me than Brooklyn, but I started avoiding Brooklyn after the backward trucker cap infestation a good decade back, so Brooklyn ins't exactly a known entity to me at this point; I'm probably unfairly biased. I'm sure there are wonderful people in Brooklyn, some without their hats on backwards.

The D.S. & Durga website is good fun--artsy and eclectic. It avoids the usual pratfalls of indie perfumery (chiefly, lack of imagination or vision when it comes to packaging and the experience surrounding the product), without knocking you over the head with the distancing effects of impossible hipster chic. The boxes and bottles are simple without being flimsy or inelegant. They feel like something humble and special, resembling vintage drugstore designs. 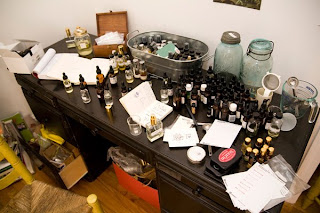 None of this thoughtful attention to detail would matter if the fragrances were nothing special. While D.S. &Durga's fragrances are nowhere near as visionary or compelling as Sonoma Scent Studio, nor as accomplished as Andy Tauer, those two are useful comparisons; I don't think D.S. & Durga have any ambitions to work in that vein, which isn't to say they aren't doing compelling work; these are fragrances played in minor chords, creating uniquely nostalgic, off-beat moods. They have more to do with minimalism.

Royal Purpure is pine and fig, cypress and cedar. It's lovely, sharing something of Dzongkha's bitter spiciness. 1538 Rheims and East Mideast are the standouts of those I tried. I can smell cardamom and saffron in East Mideast, and a bit of the rose. 1538 Rheims smells of musk, patchouli, ginger, and iris. The copy reads:

"A handsome lady begins to appear in the upper window of a ruined tower, enchanting the whole township. A minor chaplain searches the ruins in vain. The room she appears in is mysteriously locked. Air blows from beneath the door."

Again, good fun, this stuff, but not so trifling, either. Most of it seems to last well, smelling soft but rich several hours after application. After reading otherwise on a few perfume boards, I'd expected differently. The fragrances are mellow but diffusive, and they have a quality I haven't sensed in anything else currently being made--handcrafted, mass produced, or anywhere in between. D.S. & Durga have some kind of licensing agreement with Anthropologie and can be found at most of its stores (unlike, say, Histoires de Parfum, which is on the website but not at many of the brick and mortar locations). They've just released a trio of edp's in larger sizes (50 ml, as opposed to .6 ounces), more affordably priced. Of these, I like Shake Shake Senora the best. Island Marigold, Heliotrope, and Vanilla Orchid, says the packaging. It's a wonderful treatment of vanilla, more herbal than I've smelled before, subtly medicinal. 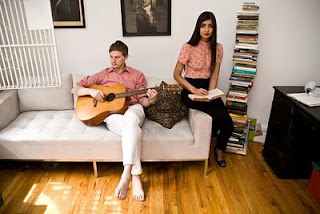 Durga (real name Kavita Ahuja) and D.S. (aka David Moltz) have referred to themselves as "rogue perfumers". I like that. I appreciate what they're doing. They seem to be true artisans. Everything is bottled and packaged by hand. They travel, picking up the essences they use in their fragrances, all of which were at one time and might still be bottled not just by hand but in their own living room. Many of the essences and attars come from a centuries old shop in New Delhi. Ahuja once included herb books, locations, music, outdated wisdom, recipes, old medicine, and childhood as primary influences. "Memory is the most essential thing to making a scent," she said, "as you must remember the impression something has left upon you even if you are using your imagination."

Said Moltz not too long ago: "We thrive on the collective spirit of out friends in NYC who put their heart and soul into their own arts and crafts--jewelry designers, painters, screen printers, architects, clothiers. A good deal of our close friends make something with their own hands. We share information and we wear each others' creations."

In an interview online, Ahuja said: "I think we put out something very special. It's a time consuming product and we put a lot of ourselves into it."

Haha! I loved this review. Imaginative perfume copy can be so much fun. I must try this line. Thank you! :)

I just saw a bottle of Durga East Mideast on sale at Anthropologie for $14.00 - I really liked it, but I didn't buy it. I wish I had! Thanks for the review, Abigail.

Elizabeth,I saw those sale items too, but they were 30 bucks when I ran across them. 14 is a much better deal and I think more than reasonable for the quality. I continue to read reports of poor longevity but that just hasn't been my experience, still, several weeks in.

Dissed, look for an Anthropologie. They have the three new D.S. fragrances and still might have a sale table set up with some of the older scents discounted.

I had my eye on Smoked Amber and East Mideast at Anthro for several months, but the original $48 price tag dissuaded me. However, I stopped by the other day and the price was down to $14. When I went to the counter to pay for it I learned that it had been further marked down to $6.95. I bought all that was left. Woo hoo!

Have their Homesteader's cologne (a collaboration with J. Crew. I absolutely love it and am very terrified to use it up as they are not creating more of that batch I believe :(

overall, wonderful company. Since I have found this company, I have my heart set on discovering all their fragrances and possibly relying less on large brands.