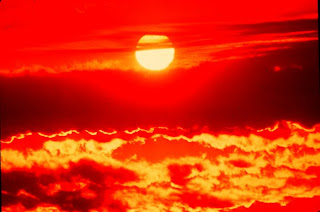 I keep trying to remember where I was this time last year, because the mood I've been in for the past month or so feels very familiar, and I want to think it's some sort of seasonal affective disorder which takes root right after Spring. Nothing depresses me more than Summer. I can count on one finger the fresh scents I like, and I'm not a heat person, though after fifteen years in the South I've developed a thick enough skin to get me through to October without incident. I admit, a few of the fragrances I like end up on people's Spring and Summer lists, but I tend to wear them in the Winter, preferring their crisp sensibility in a colder climate. The seasonal flankers rarely interest me. My skin seems to sweat away whatever I spray at it in a matter of minutes.
This is all another way of explaining why, like Abigail, I haven't been writing much lately, I guess.
And yet I keep wearing, and keep trying to wear, and keep smelling. It's just that I'm not as inspired as I get during the Fall and Winter seasons. And a funny thing happens; when I surrender a little, and give up trying to make sense of Spring and Summer fragrances so single-mindedly, I return to the things I truly like, and see them in an entirely new context.
Last year, the catalyst was Habanita. I love Habanita in the Winter but to me it had always seemed a study in powdered excess. In the heat, the powder dried away, leaving all the tobacco I'd always heard about but failed to see. It became this amazingly smoky, sultry thing. And yet if you ask almost anyone, Habanita (and many other fragrances I love) are strictly back shelf material until October rolls back into view.
What I'm starting to realize is that, while yes, there are plenty of scents which speak to a season in some site-specific way, the idea of seasonal fragrance in general is as much of a marketing tool as gendered fragrance is. I knew this, but never thought too much about it. Taken to its logical conclusion, it means that what really changes seasonally are our perceptions, so that it isn't necessarily about buying something different as seeing the same thing in a different way. No marketer would let that theory fly out the boardroom.
Yesterday I tried Bijan for Men, and was amazed by it. I'm wearing it today. It has a wonderful orange undertone, some oakmoss, nutmeg, clove, carnation, cinnamon, fir, honey, florals, leather. Aside from the orange, these are not the kind of pyramid players you see allowed off the bench during June, July, and August, and yet you put them on that stove and they start to cook in a fantastic way. I can smell Bijan and I know that almost everything I'm loving about it at the moment is something that would be dormant during the Winter. The stuff I'm liking most would be inert without the heat.
A few other fragrances I found the heat to reactivate for me lately have been: Shocking by Schiaparelli, Lush Karma, Serge Lutens Chypre Rouge, and Kenzo Elephant.
I'd love to hear your allegedly counter-intuitive Not-So-Summer Summer discoveries...
Posted by Brian at 6/05/2010 11:24:00 AM

I also have a difficult time with summer *cool hugs*

The only scent I want to wear these days is La Chasse aux Papillons. Everything else is drowning me along w/the humidity.

I have no difficulty with summer scents but I understand your feeling when everyone is happy about a season and you are not...
I am going to sample the scents you recommended in the future, because I love a extraordinary scent with a bit of a masculine note.

Even here in England it's way too hot and humid for me. I love velvets and cashmere sweaters and rich perfumes. I can only bare Issey Miyake's new floral version of "A Scent". If not that then my husband's " Citron" by Roger and Gallet .

Perception, always part of the key, no? Glad to see you've returned the control button to yourself...I've never met Bijan for Men, but thanks to this, I certainly do understand what it is/how it is on you/to you. As for Habanita, I remember you writing about Hab in summer, and have it on my "give it a go" lineup for this summer.

What surprised me recently was Un Rose Chypree, which I put on on a hot, humid day, thinking only about that opening. I was having a lunch meeting, I would be in and out (of a car, of buildings, etc) and wanted something interesting that wouldn't get in the way and maybe give a little lift. What I didn't expect was sitting at the food table, and thinking "hey, I smell really good," and quickly reviewing to see if I had done any pre-shower test drives (as I often do). Because this rich warmth had nothing to do with something "chypree." It ran amber, and lush, and even though I knew it was 90 degrees outside (a travesty in May at this latitude), I just didn't care.

Then I spent some time outside, with plants and pretty objects and dirt, and it/I still smelled so wonderful. I knew it was "wrong"...but I must admit I tried to pass close by a couple of people, just to see if there would be a reaction. I remain convinced the only reason I didn't get one was because it wore close to the skin, and I am never a demon applier. (A convenient attitude to take, I know, but we are working on our own perceptions here, yes?)

The one thing I have trouble with in the heat that in one way seems like it should make sense is intense white flower. If it is hot out, I feel stuck inside it, as if that siren call lures you into what is really a carnivorous plant, that is going to take a looooong time consuming you. And I don't at all mean that in a positive way.

Hey, I'm the girl who prefers Vol de Nuit in the heat. In the extrait. Though my particular preference when it's hot runs to tropical florals and tuberose, I agree the heat brings out different aspects of any fragrance, which is why I actually prefer most of them in the summer. Spices? Come from hot places. So does sandalwood, and I'll be wearing a dab of Santal de Mysore when the temperature goes over 30°c. It because all smoky, milky goodness.

Glad to see you're back!!! (both of you, really - I was starting to "jones" a little after your 2 week break).

I certainly share your thoughts on Summer and heat.....it has taken a while for the high temperatures to finally kick in this season, but now that it's here in full force, I find my energy zapped and my mental constitution less then stellar.

I think I've mentioned this to you before, but Une Rose is a favorite of mine in the heat, as is Alien Liqueur de Parfum. And thanks to a great review from March (Perfume Posse), I ordered a bottle of PARFUMS DE NICOLAI Maharanih and have been enjoying it in the immense heat also....so spicy and bitter and "orangy" at the same time....I bet you'd really like it.

Sit back, pour yourself a great big glass of ice-cold cucumber water and try to relax.....the cold will be here before you know it!

Nice post! I agree that fall/winter regulars can be delightful discoveries in the summer. Ambre Sultan is lovely on a hot day. I also have memories of wearing Bandit to an outdoor art festival in mid summer. It was perfect.

I had to come out of lurkdom to commiserate with you on the Hell that is summer. I'm Southern, and I have never gotten used to the heat...hate it beyond all reason, and just go into hunker-down mode, even here in LA, where it is thankfully not as humid, but one never gets a break from the unrelenting sunshine.

Have never smelled Bijan for men, but many moons ago, I kept smelling what I thought was cat urine in our office suite; I thought a feral cat had made its way in to the building, and went so far as to call Animal Control out. Turns out it was just that the majority of the ladies in the office had discovered Bijan...

I wore The Party in Manhattan, of all things, last summer! (And last winter, of course.) I don’t think I got the original version; there is no skank at all, just rich, wonderful carnation and jasmine. Not sure if it really smells any differently in the summer, or if I am just using it as aromatherapy because I adore it so much!


Glad to have you both "back" by the way!

So I try to keep myself quiet about it [ I live in Sunny South Boston-
Where they only LIVE for the summer], out of deference for their fondness;-0

I wear whatever gives comfort , as long as no one else is uncomfortable.
Rich or airy.

Angela, how is that new floral Issey?? I'm curious.