From the Mountaintop: Norma Kamali Incense 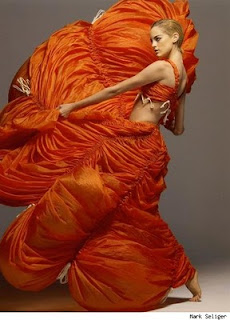 As soon as I smelled this magic stuff, I knew I had to sign on and talk about it, because I waited forever to try it, and my hesitation had to do mostly with how infrequently I heard it mentioned. Incense couldn't be all that--it couldn't be too terribly fantastic--with so little being said on its behalf. I revisited the reviews on makeupalley again and again--one of the few places I saw it discussed--trying to find a common denominator in the general opinion there. Incense was said to be strong like you can't believe, one of those assault weapon fragrances which make massacre of your nearest neighbors. It was said to be linear ( like a bullet leaving the chamber, it moved straight to its victim), offensive, too bold to be tolerated. How could anyone actually wear his stuff, people asked. In theory, this sounded like my kind of fragrance, but the stuff goes for a whopping two hundred and twenty bucks, which is quite a sum for a feckless gamble.


I should mention: I'm not an incense fanatic. I rarely seem to back flip for whatever the latest craze seems to be, and I often resent the din of conversation centering around something which seems more about marketing than merit. Wonderful things have been done with Oud--I own a few of these things--but I grow weary seeing someone's mouth start to make the shape of the word, worried I'll have to hear more about it. Fig and iris were like Brittany and Kate Plus Eight to me. Where did these things come from? How long would they be cultural wallpaper? Would everything be brought to their level? The various permutations of these trendy notes fascinated me about as much as a photograph of Brittany emerging unawares from a limo, sans underthings. They were distractions, more than anything. Incense, for me, was just another one of these pointless celebutants. I loved some of the fragrances, the Comme des Garçons series, particularly, but for a while it seemed like learning to love the enemy, someone with whom you'd be forced to share a small cell indefinitely.

What drew me to Norma Kamali's version, I can't exactly say. Probably the idea of its force. I make no secret of my love for the stinky. This makes it into a joke, but really, for me, it's about embracing scents others make silly excuses not to like. My friend Bard says that when people say a fragrance is overpoweringly strong, what they essentially mean is, they don't like it. Which isn't to say some fragrances aren't loud. Poison is an intense scent. Amarige can be. Habanita is. But I'm always shocked, when I discover such pariahs for myself, how tame they actually are compared to these reports, and I've gradually learned to pay attention to the fragrances people dislike intensely.

I finally dropped coin for Incense, and I knew the moment I sniffed from the stoppered bottle that it would enter my top ten. I got the feeling it had always been there, on the list, waiting for me to join it. Incense is just about everything I might ask for in a fragrance, and so much more than a simple, straightforward variation on a them that I'm disinclined to call it by its name. Incense is robust but smooth, balsamic, charismatic, a little smoky, vaguely spiced, woody, diffusive, and persistent. It does smell like incense. It smells like a lot of other things, too. At the same time, I'm again thoroughly baffled, Bard's words aside, by the response to it. I don't consider Incense to be a particularly "fierce" or "potent" smell. I don't find anything in the opening which singes the nose hairs; nothing which resembles paint thinner or lighter fluid fumes. It doesn't tip heavily toward the masculine to me. The reports of its relentless linearity confuse me as well. While I do feel that Incense remains consistent from beginning to end, and while I agree it goes through no radical shifts, I suppose I wonder what fragrance truly does. Incense operates like a natural fragrance, shifting mercurially, full of nuance and depth. You smell it on someone and it speaks of a story. You feel there's something going on there, under the surface. Incense seems to collapse the idea of a surface, forcing you to sense depth. It has the kind of presence most perfumes are developed by creative teams to avoid at all costs. By this, I don't mean it's loud, or even that a little goes a long way; I mean that it has character and is unique.

Those who adore it and assign it top ratings like to point out that a bottle will last you forever, because you only need one drop. More strange praise, which I know now contributed to my resistance; why spend 220 bucks on something you can never have too little of? The truth is, I see myself moving quickly through Incense. I sprayed myself about five times in the summer heat yesterday and by no means or stretch did I scare anyone out of the room. I was working side by side all afternoon with a colleague and had no problem. Trust me, I asked. Incense requires no more or less application than any other scent that comes to mind, but, then again, like many of the fragrances I love, it's often most misleadingly described by its devoted admirers. It's the kind of scent you can't find the proper words for, maybe, even as it compels you to search.

Finding a great fragrance can be a religious experience, and you want to share the pleasure it brings you. It alters your consciousness a bit and leads you to see things in a different way. You want to shout it from the mountaintop. That can come off like proselytizing. It can also come across as superiority--something I often pick up from other perfume bloggers. I think I understand that. I empathize. Ultimately it's a process of trying to put into words, with some kind of definitive elan, why one fragrance has touched you more than another. In order to emphasize its greatness, something else must be less great.

Ultimately, however, the way a fragrances reaches one person will be very different from the way it does or doesn't connect with another, something we all know very well, however much we engage in dissecting the unclassifiable. We collectively pretend that we can reach consensus on fragrance: this, over here, is the good stuff; that, over there, that's the crap. The pile of crap is usually a gold mine, and gives away the lie of all these glorified opinions. Few have called Incense crap, mind you. But many sing its praises in a way which doesn't do it any favors, particularly when you consider that, had I heard it described differently, I might have purchased it months ago.

Thank you for the great post. I love hearing things described that one is passionate about, and your thoughts on describing perfumes were interesting.

I do love incense, so this will be added to my list of fragrances to sniff someday.

I. Must. Try. This.
I have been keeping this on my radar for a while, and suspecting I will love it like you do...

This is a beautiful review, funny, and true.

Excellent review, Brian. I have a decant of NK Incense and love it. I'll have to haul it out and wear it again soon.

Ha! I already knew what my opening was going to be, considering cleaning it up, then saw your last paragraph. To wit:

Not as in "this is crap," but as in "dangnabit, son, you've gone done hooked me further into this unobtainable." I've tried to avert my gaze--and my ears--when a pal in perfume whom I admire starts waxing zen-ly but intensely enthusiastically about this one. Mind you, she doesn't laud it as a habit, and doesn't really say much about it even when she mentions it by name. All the more reason for the astute to pay attention, methinks. (She also suggests Ceremony as something to try, for those who like Incense. Just saying.)

Well, foo. Okay, reality is, I won't lay nose on this for a while. And reality is also I am thrilled for you, to find an instant launch into Top Ten something. What was it, early summer, when you feared ennui? HELL no. Just waiting for...something worthy.

Wow! I love it when someone (me as well) smells a perfume that somehow changes your whole perspective and brings a lot of joy as well. :)
You have me wondering now - I will need to try this soon. :)

I share your contrarian sensibility when it comes to finding and "embracing scents others make silly excuses not to like" (couldn't have put that any better myself). I read many perfume blogs, most of the "big" ones, on my iGoogle page. The gadget (window thingy) for yours is going to the top of the page where I can always see it. That clique-y one is moving down a peg. (You know who you are, gang!)

Many thanks for the great reads!

In the late 80's I was in NYC for work and happened by the Norma Kamali boutique. I wandered and and ended up buying two scents that came in small "medicine" bottles that were silverized somehow. You could apply with the dropper or attach an atomizer. They came in a velvet drawstring pouch. I believe these were her first two scents, one smelled like incense and the other like cedar or pine. I didn't wear them often, and they eventually dried out. On a recent cleaning bing, I tossed the bottles - which I now, being in full perfume obsession mode, regret. If you can any idea what that second "cedar" sent is, please let us know. I'm going to NYC next week and will find my way to Norma Kamali's!

Bonne Vivant, I do love it. I think it's well worth a sniff.

Scentself, I've debated Ceremony. I hear it doesn't last as well but who knows anymore. Everyone is so different.

Thanks, RM! I'm glad you enjoyed it. And thank you, Queen Cupcake, that's really sweet. You'll be happy to know I'm finally sending those Laura Ashely L'Eau vials out. I've had a bit of a sluggish summer but I'm coming back fighting. Thanks for being patient.

Anonymous, I think the cedar one must have been Ceremony. What this means I think is that Norma was sort of far ahead of the incense craze, with two early incense frags in the eighties.

You know, it's weird, but honestly I so rarely smell anyone's perfume and when I do I'm so happy. It's like we're part of a secret society. One day in an elevator a woman smelled so good to me. I complimented her. It was Paris Hilton, which I would loathe I think had I smelled it at the counter. But seeing her enjoy it and command the space around her with it was such a high. I was complimenting her style and attitude more than anything.