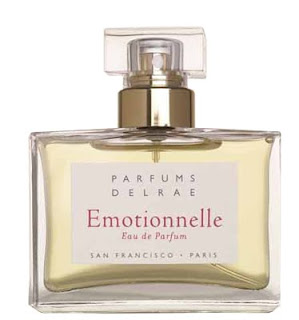 Back when it first came out, I wasn't thrilled by Emotionnelle. I guess this was over a year ago now. It seemed like some kind of departure for Delrae, an important shift, though I couldn't put my finger on what kind. Anytime Emotionnelle's creator, Michel Roudnitska, produces anything even remotely evocative of his father Edmond's oeuvre (Diorelle, Parfum de Therese, Rochas Femme, Eau Sauvage, et al), comparisons are begged. And most of Roudnitska, Jr.'s fragrances seem speak to that heritage in some way, so the conversation about Emotionnelle was road-mapped before it ever hit my skin.

The strong melon thrust of Emotionnelle can certainly be seen as an homage to Parfum de Therese and Diorella. It can be seen as somewhat retro in a certain sense; not just because it recalls that vintage stock but because it doesn't align itself with any contemporary trend that comes to mind. I would never say there's no relation between Emotionnelle, Therese, and Diorella. How could you? But something about that comparison turned me off, I now realize. Again, I can't tell you what; but I think it's a bit of a trap door.

True, Emotionnelle feels retro, but it doesn't feel as spring-like to me as Diorella or Therese. It feels more like an oriental, actually, what with the clove, cedar, and amber in the base. Even at the top, when the melon is strongest (it's strong all the way through, mind you), there's something barbed about Emotionnelle, a sharper edge missing from Therese and Diorella. Emotionnelle feels darker and spicier than I thought at first, and ultimately a comparison to Rochas Femme might be more apt.

Like all of Roudnitska's work for Delrae, Emotionnelle has exceptional persistence and projection. Of all the coin I've laid down for perfume, the money I spent on the first five Delrae fragrances seems most intelligently squandered. I've written about the first four and about Roudnitska's work in general before. For me, he's a sensualist on the level of Maurice Roucel and Sophia Grojsman. What distinguishes him is a quality which can make his fragrances feel ten miles deep and horizons wide. The work of Roucel and Grojsman is by no stretch shallow or narrow, but the end effect, while plush and often robust, doesn't feel particularly voluminous. Both create perfumes which seem to have ripened right on top of the skin. Grojsman's Yvresse is a good comparison to Emotionnelle, with its boozy peach focal point. It feels more concentrated, more intensely pin-pointed.

Emotionnelle takes you down into the soul of something and spreads its arms out to bask in the full breadth of its splendor, and I get the feeling that Delrae decided, after it, to move in another direction, something considerably less epic in scale. The last two fragrances in the line up were created by Yann Vasnier. The word you hear most often in relation to these is light. The word you heard most often in relation to Roudnitska's perfumes for Delrae was heavy. I would subtract the "v" and add a "d", myself. I'm not sure vendors knew how to sell or market those first five Delrae perfumes. The one place here in town which carried them has stopped updating their stock. They still have boxes of Eau Illuminee and Debut on the shelf, collecting dust. I suspect Delrae felt a need to change its point of view.

It happens. A lot, actually. A perfumer has a run or a relationship with a brand which can last two, three, or twenty perfumes. Would I have enjoyed seeing how the relationship between Roudnitska and Delrae played out over the course of a few more? Yes. And I'm not a fan of what Delrae and Vasnier have produced since their division. But change is always at least interesting, and I'm curious to see where Roudnitska goes from here. For some reason, I feel that Delrae and Roudnitska tried working through their relationship with Emotionnelle. I feel it might have been each party trying harder to make the other happy. This is all speculation. But something about Emotionnelle felt brighter to me than the first four Delraes.

Either way, I'm sorry I misjudged it. I'm glad my expectations were high enough that I purchased it unsniffed. And I wish it hadn't taken me a year to come around to its charms. But it's becoming clearer and clearer to me that sometimes a blogger can't expect to have an instant opinion about a newly released fragrance. Some you know where you're at with right from the first sniff. Others your feelings and mind evolve around. Emotionnelle is a special fragrance.
Posted by Brian at 7/16/2010 10:19:00 AM