Another One Bites the Dust: Fendi Palazzo 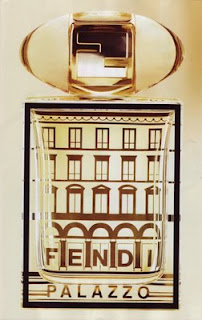 I'm having trouble figuring out why it's so hard to find much on the perfume blogs about Fendi Palazzo. I suppose it will be even harder now that the fragrance has been discontinued. Where it is mentioned, more often than not, the reviewer seems resolutely unimpressed with the juice, however high the marks for the bottle. Interestingly, that bottle seems the height of overkill to me, like the coat worn by a woman I saw pumping gas today: floor length velour, a bold print of recurring tiger heads, sparkling cut glass "jewels" for eyes. The bottle for Palazzo strikes me as something someone who pronounces Versace incorrectly might adore all out of proportion. I don't reget its discontinuation. The fragrance itself I'll have a hard time doing without.

On Basenotes they're downright merciless about Palazzo; on Makeupalley.com, a little less theatrically dismissive. The chief complaint seems to be what many of its detractors perceive as a striking similarity to Angel. I smell no such similarity. To me, Palazzo shares more in common with Karma by Lush. It has the bold assertiveness of Angel, along with its odd juxtaposition of off-center elements, and of course, being an Annick Menardo fragrance, it feels foody, all of which might be why people reach for that comparison. Then too, the patchouli is right up front. But for me it's as if Menardo refined and elevated Karma's appeal. There's absolutely a bit of the head shop to Palazzo: some incense, an ambience which comes off like smoke or resin. There's also a strange, citrus brightness there, albeit buried so deeply underneath the surface that it registers almost subliminally.

Palazzo is related to Menardo's Lolita Lempicka, as well, and in fact feels like a simultaneously muted and amped up version of that juice, where the sense of sugary saturation is adjusted to more tolerable levels. Palazzo subtracts Lolita's vanilla ad-infinitum foundation, replacing it with patchouli and gaic wood. Both fragrances have similar notes up top and in the middle. Down below they go their separate ways. I admire Lolita and even owned a small bottle for a time, until I faced the fact that it wasn't something I was going to get much if any wear out of and gifted it to someone else. It was something I wanted to like and wished I could wear, but it made me feel silly somehow, like I'd baked something in my easy bake oven and decided to smear it all over myself. Palazzo wears a more serious expression. It feels a little more sophisticated and I get a lot more mileage out of it.

And why not? There's a lot to like. It last forever, projects exceptionally, and though I seem to be anosmic to most musky scents, this one keeps reasserting itself throughout its lifespan. Palazzo is a friend whose merits I try to point out to the rest of my crowd, without much luck. More for me, as they say--while supplies last, anyway. Sephora, which has pulled Palazzo from its shelves in all but gift set form (packaged with shower gel), classifies it as a woody oriental. Osmoz regards it as "floral - woody musk" and, in addition to patchouli and gaic wood, lists the following notes: mandarin orange, lemon, bergamot, pink pepper, orange blossom, rose, and jasmine. I should also say that I see similarities between Palazzo and Burberry Brit Gold, though again, Palazzo manages to be everything I wish that other fragrance would be.
Posted by Brian at 2/20/2009 08:03:00 PM

I have noticed almost everyone on boards and reviews comparing certain scents to Angel. Hmm, I just don't smell it. It's common and most people know it well, so I suppose that's why they associate them as similar. I was just looking into Palazzo today too.

I used to sell Palazzo in my store. Or rather, I had it on display in my store and noone bought it for 6 months, and it was quickly dropped by our company and sent back. The few people that did like it thought the price point was too high.
Personally it reminds me of Amarige, but not as painfully loud, and Armani Code, but not as honeyed, if you see what I mean.

It's true, they do compare a lot of things to Angel; then again, maybe a lot of perfumers try to build on Angel's basic appeal. Like you I don't always see the similarities. Tonight I smelled Robert Piguet's Visa, another one people compare to Angel as if the two are interchangeable. It smells totally different to me, though I see the relation. Visa has a crystallized apricot note to it, setting itself apart.

I never really thought of Palazzo smelling like Amarige. I did compare them after I read your comment, Nioi, and I see some similarities, but to me Amarige is much spicier and doesn't have that patchouli influence. I'm enjoying your reviews, btw.

Thanks very much Brian! :)

When Sephora pulled Palazzo from their website, I panicked. I called Fendi, and they told me they were not discontinuing it. Now I find out (a year post-discontinuation) that it's gone. This is the one and only perfume I have ever liked. I am so upset.

This was my favorite scent I have ever found. It smelled amazing on me and I got compliments everywhere I went. I have been looking for a replacement without any success. Any suggestions???