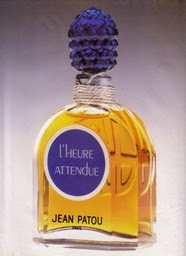 During a recent visit to The Perfume House in Portland, I surveyed what was left of their vintage stock of Jean Patou, five or six bottles of varying sizes and concentrations. The instant favorite was Divine Folie, a carnation- and clove-laden attention grabber. Adieu Sagesse was, for me, a pretty variation on L'Heure Bleu. L'Heure Attendue was a nice, slightly aldehydic melange of florals complicated by woods, faint spices and patchouli. Testers for all three, along with Amour Amour and Chaldee, sat out on the counter as I browsed the store's inventory, and when I came back to them, the distorted top notes had tapered off, and I was surprised to find how much I liked L'Heure Attendue.

I didn't smell it again until this Monday, a week later, when it arrived in the mail. The bottle is gorgeous, with a blue glass berry-cluster stopper. It comes wrapped in a geometrically patterned silk scarf, and once I got the stubborn stopper out (without breaking it, whew), some of the juice spilled on the fabric, more of which later. I dabbed some on my arm--along with about four or five other things which had been shipped with it--and went about my business, and an hour later, something kept catching my attention. It took me a while to figure out that this wondrous thing on my skin was in fact L'Heure Attendue, which had smelled nice enough earlier but now seemed to have morphed into something beyond words. You hear a lot of talk about development in perfume, but I rarely see anything that strays so very far from where it starts. That's not to say L'Heure Attendue goes off on improbable tangents. It's just that I didn't pay so much attention to it until it settled into what is clearly its general state of affairs, a langorously spiced floral with enough wood tone to it that it seems a little more modern than you're at first apt to assume.

There's lily-of-the valley in this 1946 Henri Almeiras fragrance, created to commemorate the liberation of France. I don't know that I detect it exactly. I can't actually discern any of Attendue's individual notes: geranium, lilac, ylang ylang, jasmine, rose, opoponax. I do smell some of the mysore sandalwood, and in some weird way Attendue reminds me a bit of Chanel's Bois des Iles. It also reminds me of another beautiful aldehyde, Ferre de Ferre, the incensed violets of which conjure the image of a chic headshop, where fur-draped, perfumed society women slum among glass pipes and velvet, black light posters. Attendue has that curious incense quality to it, though the floral accords are not as specific. Lush Karma shares this head shop quality; a more contemporary composition, it replaces the florals with a citrus influence. Nothing really prepared me for how lovely L'Heure Attendue is, but I'm glad I grabbed a bottle; judging by its scarcity, I seem to be one of the few who didn't seem to know the fragrance was worth having. About that scarf: Its aroma has persisted all week, and the scent on fabric is even more divine, where it plays out in stop motion.
Posted by Brian at 2/18/2009 08:34:00 PM

Sounds really lovely! Thanks for the review of a nearly lost treasure. I have a weakness for those. I may have to hunt some down, now...

just when I thought I was getting so jaded, and I didn't have any more desire to bother with hunting down more treasures...

Oh I go through that weekly. Think I've seen it all when I go to bed and wake up calling Henri Bendel to try another Etat Libre D'Orange. It's all about the hunt I guess.

Sigh. Now you know why the demise of the Patou classics is a true tragedy. I live in Portland and I "visit" the remaining Patous from time to time - my beloved Vacances is now gone from there for good, as is Normandie. I loved them all.