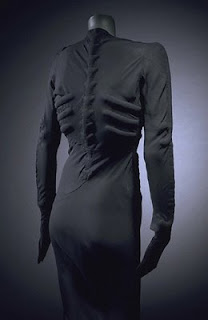 Recently, over at nowsmellthis.blogharbor.com, Angela posted a piece on Shocking de Schiaparelli, comparing old version to new. The lucky woman found a bottle of one or the other at the thrift store, along with a quilted robe and a shell-ornamented soap dish, and reports that the versions are only marginally related.

I've never smelled the orginal, though I was told by Christopher Brosius of CB I Hate Perfume that it surprised him: "Not at all what I expected--but then, that was Elsa's genius... I can say that I was expecting something rather deep and exotic from 'Shocking' but found it to be quite light, fresh and brisk - essentially the exact opposite of Chanel no. 5 (which present incarnation I must say I LOATHE, although I do get the point of the original)." Sometime last year, I found a bottle of Shocking (the 1990s reformulation, I'm guessing) and have thoroughly enjoyed the fragrance, however big a bastardization of the Jean Carles original it might be. For me, the newer Shocking has few peers in the category of spice rose, with an excellent ratio of longevity to projection. I'm going to put myself out on a limb and say that I suspect Brosius would dislike it, as in interviews he's made it very clear what he thinks of the volume at which contemporary perfume speaks as a whole. It's true, new Shocking speaks loudly at first, but it settles down into something I'm willing to wait out. Angela isn't exaggerating when she says a spritz of Shocking lasts all day. It does, and then some, in my experience. Honeyed and balsamic, with a prominent clove note, it grows richer and more interesting as time goes on.

Schiaparelli herself interests me more and more, too, especially after reading Canadian writer Derek McCormack's latest book, The Show That Smells. Over the top and tightly written, the novel recounts the story of a non-existant "movie" made by Todd Downing, director of the cult classic Freaks, which stars Elsa Lancaster in the role of Elsa Schiaparelli, a vampire. Her arch-nemesis: Coco Chanel. The whole thing takes place in a hall of mirrors, where Schiaparelli and Chanel fight for the soul of poor, hapless Carrie, whose husband, country singer Jimmy, is dying of Tuberculosis. Schiaparelli agrees to save Jimmy if Carrie will relinquish her soul. I think she wants to eat her, too. Schiaparelli's restorative magic elixir? Why, Shocking, of course. Chanel plays good, Schiaparelli bad, and it's abundantly clear, from the first sentence, that McCormack clearly favors the latter. The Carter Family make appearances as well in this "thrilling tale of HILLBILLIES, HIGH FASHION, AND HORROR! Literate perfume aficionados would definitely find the book thrilling--trading as it does in fashion and fragrance lore, including a longstanding , extravagantly vicious enmity between Chanel and Schiaparelli.

I'd never read much about Schiaparelli before. I assumed she was sort of a novelty act. Reading up on her after McCormack's book, I learned that a lot of this has to do with how her legacy was managed, or mismanaged. Chanel is assumed to be the more relevant, more important (i.e. better) designer. And yet to google Schiaparelli's work is to witness the intersection between surrealism and fashion in the thirties and forties: a skeleton dress, the bones quilted into the fabric; a hat shaped like an upturned shoe; a gown with simulated rips, called the Tear Dress. Schiaparelli, much more so than Chanel, had a sense of humor about what she was doing, and her direct descendants would be Comme des Garçons, Martin Margiela, John Galliano, Alexander McQueen, Moschino, and Etat Libre D'Orange, all of whom share her interest in playing around with the line drawn between good taste and bad, low brow and high. To assume that Schiaparelli is no longer the household word that Chanel is would be tantamount to saying that Van Gogh never sold any paintings during his lifetime because he was a dreadfully untalented painter.
Posted by Brian at 2/24/2009 10:30:00 AM

Don't be mistaken, Brian, Chanel was the evil one... If you see her 60s interviews, she oozes malevolence.

Oh I'm not mistaken! Not after hearing how she pushed Elsa into a candelabra and witheringly called her "that Italian artist who makes clothes." I would expect them both to be ego-maniacal though, wouldn't you? Big egos, big personalities, no room for both of them as far as each was concerned, I'm sure. McCormack, in his book, seems to love Elsa, which is why he makes her a vampire. He seems to be playing around with the idea that Chanel has lived longer in the public imagination, and yet Elsa is the fun one, to him at least, glamorous, decadent and enigmatic, like Dracula. In his story, Elsa is portrayed as "bad" but is actually, like the "freaks" in the movie "Freaks", the "good" one--if by good you mean less of a bore. Chanel comes off as a tediously self-righteous priss in The Show That Smells. Of course, like vampires, it's all make believe.