More on Schiaparelli and Chanel 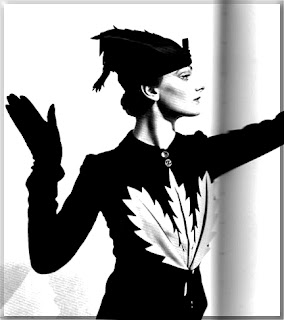 Chanel spent the war shacked up with a Nazi officer at the Ritz, on the Place Vendome, from whose windows she could have looked down upon her rival's salon.  Schiaparelli fled to New York, where, in 1942, she helped Marcel Duchamp organize "First papers of Surrealism," an exhibition that raised funds for a consortium of French relief charities.  She settled in Princeton, promoted her perfumes, lectured on fashion to adoring crowds, and volunteered as a nurse's aide at Bellevue.  The Roosevelts entertained her at the White House.  Though various manufacturers offered to bankroll a collection, she refused to design clothes in exile, out of loyalty to, and solidarity with, the couturiers and artisans of Occupied Paris.  When the war ended, she reclaimed her seventeenth-century mansion on the Rue de Berri, which had been commandeered by the germans.  White relates that she found a desk drawer filled with the visiting cards of French celebrities who had been received there, "and she never invited one of them again."  She cranked up her business, doubled the salary of everyone on her staff, and staged a comeback with bustled gowns, wasp-waisted suits, and sportswear influenced by British Army Uniforms.  Her postwar collections were critically well received, and her licensing agreements with America continued to provide a handsome source of income, but the economics of couture has changed, and, while searching for her bearings in a much altered landscape, she began, for the first time--fatally--to look back.
On February 3, 1954, two days before Chanel emerged from retirement to reopen her atelier on Rue Cambon, Schiaparelli presented what would prove to be her farewell show.  She filed for bankruptcy ten months later.  Her work was out of tune with the taste of a conservative postwar public unwilling to think too hard, and weary of irony and aggression.  Chanel became a household word, and Schiaparelli a name that the world would forget how to pronounce.  It's skYAP-a-relli.  The "ch" is hard: like her chic.
Posted by Brian at 2/24/2009 09:01:00 PM

Just trying to get the word out on my new line of natural home-brewed perfumes. Please check out my website, the Anosmic Perfumery.

That's very interesting!
So, Chanel was a collaborator? Did her compatriots punish her for it after the liberation? And Schiaparelli did the right thing. Hmmmmm. So maybe it would be more fitting (and just) if there were a range of luxury goods with a covetable 'S' logo, instead of the familiar linked Cs...

Vive Schiaparelli!!! She is forever in my mind one of the greatest people of all time. I applaud her every move and am thankful her memory is still alive.