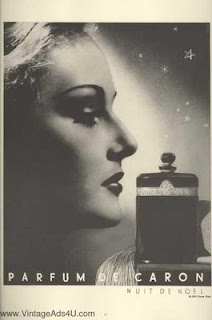 I don't need you to tell me this is the wrong time of year to be reviewing this fragrance. The spiced, nutty, soft florals of Nuit de Noel are diametrically opposed to the heat of summer. But it's on my mind. Yesterday, I was at my aunt's for lunch, and she started talking about my grandparents--how wonderful they looked when they got dressed up to go out, how chic. My grandfather was handsome when he was young, she said. My grandmother has good taste.

My grandmother died ten years ago but my aunt has started talking about the dead in the present tense. Her cousin died last year but is very strong and good at getting around. Her brother died right before her mother, a brain tumor, very sudden, but he lives in her mind as a constant, vivid presence. The impact these people had on their environment persists in the present for her, however long gone the source. In the last year, I've noticed myself referring to people I know with someone else's name. My grandmother used to do this. She addressed me as all of my uncles and male cousins before finally getting it right. I had three uncles and countless male cousins, so this took a while. Eventually, she never got it right, and had no idea she was off the mark. I refer to my grandmother as Nana, my childhood understanding of the Italian term, Nonna. This kept confusing my aunt, who thought I was talking about her grandmother. It's funny how tricky words and memories are, how the past lodges in the mind, altering, confusing, or influencing the present.

My aunt talked about the perfume my grandmother wore on the special occasions she dressed up to go out. It was in a green, tasselled container flecked with gold--maybe. She wanted to say it was called...Christmas Eve? No, she was almost positive. The thought that my grandmother and I might have been connected by the love of a perfume sent an electric charge through me, but I sorted patiently through the questions necessary to narrow things down. Listen, I finally said, there's a wonderful fragrance called Nuit de Noel. Could that have been it?

My aunt was insistent that, no, it hadn't been French. Okay, but was the name printed on the bottle, I asked, wondering if maybe my grandmother, knowing the French name, used the translation when discussing the perfume with her daughters. Then too, Caron issues special editions in crystal flasks and such around Christmas, so perhaps the name wasn't on the bottle. My aunt couldn't remember. Like me, she remembers going into my grandmother's room as a child to admire the bottles on her dresser. I don't remember the green tasselled container. I do remember the white and black herringbone of Miss Dior, and how it set the tone for my grandmother's room, with its plush, pastel and cream area rug, its floor length, satin curtains, the moss greens and rose and faint blues, the gold filigree tray on her dresser, the air of quiet in there...

Oh, well it was subtle, my aunt said. It didn't shout. You got up close to her and you could smell it. She dabbed it, just a little, on her neck, and it radiated. Very warm. I remember it in my head, she said. I can conjure it like it's here now. But I can't describe it so well. When she got up to go to the bathroom, I looked Nuit de Noel up on the computer. I did a search under "Nuit de Noel bottle" and up came an image of that gorgeous, almost macabrely elegant black deco bottle beside its green case, a moss-colored tassel the size of the whole affair decorating one end. When my aunt emerged I asked her if this was the perfume she remembered. Her excited, affirmative reaction made me feel as though I'd found a long lost relative, or brought forth a ghost. I had, in a way. She wants a reunion and has asked me to track down a bottle just like that one. She'll pay the price.

My grandmother was a classy but no nonsense Northern-Italian immigrant. Her family came from Lucca. She was always impeccably dressed. Assimilating into the ways of the South was difficult at times, as she was much more headstrong, less frilly than what was expected of the Southern Woman. She was dark haired and olive skinned with Greco-Roman features. Southern women, as a rule, were expected to retreat, like pretty wallpaper you had the choice of noticing--or not. My grandmother didn't retire--even if she'd wanted to, in the context of the South, her looks emphasized her difference and presence emphatically. She came forward in almost every situation. She was a fierce, opinionated friend and a withering adversary when her bullshit detector was alerted. "Look at her in her stupid pearls," she used to grimace when Barbara Bush came on the news, making it clear she could barely stand to look at her. Like many Southern women, my grandmother had her hair done once a week. Her house was just so. But she had a unique style, almost masculine in expressing its femininity.

I don't remember smelling the Miss Dior on her, which makes me wonder if someone had given it to her, whereas Nuit de Noel makes perfect sense. No white florals for her. No sweet nothings. Nuit de Noel, like my grandmother, is solid yet subtle. It expresses a singular point of view. Nutty to the point of smoked, barely floral, softly spiced, it feels like an expression of character, something you observe or perceive emotionally rather than smell, the kind of scent which might be some strange manifestation of the wearer's bedrock identity rather than something they dabbed on. For my aunt, Nuit de Noel was my grandmother, and having her own bottle will mean communion with the afterlife. Here's hoping this doesn't confuse her further.
Posted by Brian at 7/06/2009 10:24:00 AM

I wish I could've known your grandmother. She sounds a lot like the older female relatives that were so influential to me -- and anyone of that age who would disparage Empress Bush is all right with me!

Excellent writing Brian - it does make one long for the South......I have relatives in Charleston and have visited them on many occasions, so I can attest to the subtle nuances and (sometimes) garish regionalism of Southern culture.

My grandmother is still alive, and I spoil her with fragrances.....her favorite right now is Lorenzo Villoresi Musk - but her "standby" fragrance for years was Ralph Lauren's Safari for Men! I'm thinking of getting her Montale's Fougères Marines or Bois 1920 Extreme for Christmas this year.....

Have you ever thought of what perfumes you would share with your grandmother if she were still alive today?