Two by Sonia Rykiel: Le Parfum and Rykiel Woman (Not for Men!) 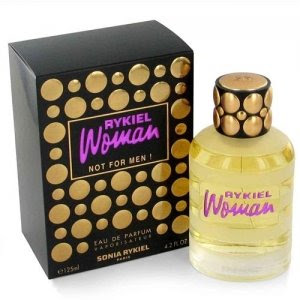 With the exception of Rykiel Rose, which left me resolutely unenthused, Rykiel fragrances have never failed to impress me. Belle en Rykiel (2006), my first exposure to the line, is a favored go-to, mixing lavender, chocolate, frankincense, coffee leaf, and heliotrope in a way which still manages to surprise me each time I spray it on. Sonia Rykiel (1997) is a fruity floral done right, with nice woody undertones (sandalwood, cedar) contrasted against a dense medley of pineapple, currant, violet, honeysuckle, and rose--a chamber piece from the nose behind the operas known as Opium and Dune. Even Rykiel Homme (1999) satisfies, pulling a few punches in what at first registers as standard masculine fare. After the yuzu notes up top wear off Rykiel Homme evolves into a strange tug of war between fig, vioilet leaf, jasmine, nutmeg, vanilla and vetiver, a sort of dewy, less adversarial Habanita, fresh off the ciggies. I enjoy all of these, but as good as they all are, none prepared me for Le Parfum and Rykiel Woman, two of the nicer discoveries I've made in the past several months.

Le Parfum (1993) is seldom mentioned on the perfume blogs (see the link below for a rare exception), and unavailable all but online. It's quite a best kept secret for a fragrance which projects so forcefully. The notes are listed as hinoki wood, mimosa, passion fruit, osmanthus, rose, iris, tonka, ambered precious woods, and vanilla. The ingredients on the box list treemoss extract as well. Rykiel Le Parfum sits somewhere between Mitsouko and Mauboussin, with the overripe fruit of the former and the vanillic woody rococo tendencies of the latter. Oh but it lasts--and lasts. Hours in, the osmanthus, which up to then has been pretty bashful, opens a can of whoop ass, and the thing really hits its stride. This is one of those fragrances you can wander around in. It has a rich, creamy depth to it which makes many contemporary perfumes feel sheer and flimsy by comparison. It's also a lot sturdier, a warm but declarative scent, a melodrama played out in stage whispers. I wish I knew who made it.

I expected to like or at least appreciate Le Parfum. The shape of the bottle announced slightly off-kilter but classy intentions: not quite round, not exactly symmetrical. Aside from Belle en Rykiel, a solid cube of glass with a lucite top, the line's bottles have always struck me as counter-intuitive, more playful and inconsequential than the fragrances warrant. Even so, Rykiel Woman (2003) is a shock. Striped glass, crap lettering, and a black cap with naff gold studs hardly augurs high quality. More like high camp. And in fact, when first applied, Rykiel Woman seems like an afterthought. But give it time. Moments later, something amazing wafts up from the point of contact, subtle but emphatic.

From what I was able to find online, the fragrance was the brainchild of Rykiel's daughter, who'd opened up a section within her mother's boutique featuring more risque apparel and, um, accoutrements. A sign on the door read "Not for men!"--though, of course, it was, if only indirectly. What's a bullet without a target? The bent was cheeky sadomasochism; thus the gold studs on black background, de Sade by way of the Village People, with a detour into Danielle Steele. Should the abnormal size of the bottle (a whopping 125 ml) and its ribbed design be regarded as some sort of wishful thinking? Who cares. The scent is fantastic, like something and nothing you've smelled before. What keeps me engaged with Rykiel Woman is how close it comes to many fragrances I've known and loved, and yet none have had its strange, hypnotic diffusion, both there and not there, a real come on, with substance to back it up. Very few fragrances sit on the skin this way, speaking to the air around them.

The notes are listed as pink pepper, violet, date, jasmine, solar flowers (oh dear), bulgarian rose, black pepper, olibanum, agarwood, leather, and amber. I'm here to tell you I smell very little of all that, least of which, solar flowers, whatever the hell those are. The leather is practically subliminal, though I wouldn't call what registers suede, either. The overall effect is much too dry to signal the date, too smooth to suggest the pepper. Nor is it floral in the least to my nose. What I do smell is olibanum and a very soft, very well-played agarwood, making this one of the better olibanum fragrances I've smelled, cozy and resonant.

Rykiel Woman has a well-deserved cult status on the fragrance boards. That said, when I read "comfort scent," I'm skeptical. Me, I've typically found that a comfort scent means barely there, a meek suggestion of a thing, no bark, no bite. Spending time with Rykiel Woman, I understand the term. It does in fact wrap around you like a blanket, paying off in dividends hours later, with a curious stealth persistence.

I purchased both at Rei Rien for affordable prices (Le Parfum for $26, Woman for $40). Please note that Rykiel Woman also comes as an EDT. I've only smelled the EDP and am told they are very different. The EDT is apparently much more of a fruity floral. If anyone has smelled Rykiel Homme Grey and can tell me something about it I'd be eternally grateful. I'm also curious to hear about Rykiel Woman Hot, a limited edition flanker.

"Some sort of wishful thinking"...thank God I wasn't drinking anything! You crack me up! And thanks for some new things to sample; these sound intruiging.

Well, I guess I'm not allowed to try the "Rykiel Women (Not for Men!)" if I choose to follow the blatant orders of the fragrance name......(oh brother.....although solar flowers might be good to layer over all of my solar woods and solar musks...), but Le Parfum sounds heavenly and I'll put it on my list of things to "seek and employ".

Thank god you have some background info on that dorky name!

Strangely, of the two you reviewed, the Not for Men! was the one I felt I can never live without. . . and meh about Le Parfum.

As far as resemblances go, Not for Men! kind of reminds me of Parfumerie Generale's Cadjmere. But I love this one more than the PG.

Brian: I have not tried Le Parfum, nor any other Rykiel save Rykiel Woman, but on the latter I couldn't agree more with you. I would struggle to put into words exactly how it smells, and you've done a great job. It's a fine, fine, scent. And yes, I would describe it as "comfort", but definitely far from "barely there." But gosh, that packaging is t-a-c-k-y. Gah! I'm happy mine is a decant.

Hi Brian -- Thanks for this post! I recently bought a mini at a flea market. The bottle is shaped like a short-sleeved sweater (yeah, it's real cute). The sticker on the bottom says only "Rykiel." The scent is a little musky, a little woody -- sometimes my nose will mistake a cedar note for coffee, and I thought it was, until I read this. It is a very nice scent, comforting, close to the skin and best of all it lasts. 1997, huh? Doesn't surprise me. I've tried "Woman" and liked it too. I'll look for the Le Parfum.