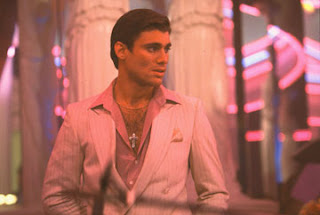 When I first smelled Versace Man, a little less than a year ago, I compared it to Guerlain L'Instant Homme. I sought out similarities between the two, comparing them as if they were immediate neighbors on some imaginary continuum. Ultimately I made facile connections. Versace was a good time at the disco, hairy chest sweating, shirt open to navel, gold chains, something like Armand Assante on a bender. L'Instant was closer to Fred Astaire, all buttoned up, impeccably turned out, never broke a sweat, skillfully gliding around like sleepy background music.

I doubt I would ever have considered these two in the same breath had they not arrived in the mail at about the same time, because, smelling them now, I see the only tie that binds them is a refreshingly femme-coded approach to the masculine: spice and woods through a veil of soft florals. When you spend a lot of time smelling fragrance, many things start registering as vaguely similar. Twenty tuberose fragrances, a thousand vetiver bases. A rose is a rose is thirty different perfumes at once.

Which isn't to say there's nothing to recommend Versace Man. But you smell so much that sometimes the finer points get lost. You overlook things, make snap decisions without realizing how rash they are. I always liked Versace Man, even when I rotated it to the back of my cabinet. I just never wore it--or decided I never would. It smelled enough like L'Instant, and L'Instant was Guerlain and, well, Versace is, as the white trash protagonist in Showgirls says, "Versayce".

Versace Man might still be at the very back of my cabinet had I not totally reorganized it last night. Finding it, I sprayed some on. I'd forgotten how much I loved the fragrance when I first smelled it. I hate so many masculines; like many feminines, they seem more an advertisement for or a reinforcement of gender, beating you over the head with their crudely contoured olfactory propaganda. It often seems the only way to get around this is to totally subvert their intended application. Poison smells like the eighties on women. On a man, it smells like the future. A guy in lily is a total collapse of sensory expectations. Modern masculines, even supposedly feminine masculines, often fill me with a nagging despair I liken to nerve gas, from which only tuberose can sometimes rouse me and clear the air.

I won't call Versace Man radical, but whoever came up with it (art directed by Donatella, created by...who knows?) seemed to understand the power of gender f*@-ing, the lure of slightly misaligning things, and this sensibility immediately distinguishes the fragrance from almost everything else currently on the same proverbial shelf. It smells even more like a departure when you learn it came out in 2003, well ahead of the current trend for masculine florals. Versace Man is unquestionably a precursor to Dior Homme, though Givenchy Insense predates it by a decade.

I do get a little of the neroli in the opening. I get none of the general fruitiness or synthetic buzz some register. From the start, I get just about everything else listed in the pyramid provided by Basenotes. For me, Versace presents one of the more attractive, intelligent uses of saffron in a male fragrance. This softens the whole affair in just the right measure. Cardamom and pepper are used so skillfully and judiciously you might think you've never smelled them properly before. Amber, labdanum, and tobacco notes waft up throughout.

No vetiver is listed but there's a ghost of it there, like a phantom limb. This is perhaps what vetiver smells like after a night of coitus with cosmetics, an Indian dinner date, and someone else's scent of choice. Versace has good longevity and moderate projection. It's the kind of fragrance others get closer to you trying to smell. It diffuses like the smell of sex around an unmade bed, daring you to make the connection. Part milk, part powder and spice, it exudes some of the dissonance found in more animalic fragrances without actually going there. It holds up in the summer. In the winter, it has stealth properties. And it has a little more Astair in its Assante than you might first ascertain.
Posted by Brian at 7/05/2009 10:36:00 AM

This is one of my favourite masculines, I used to love to sniff it on a man (but I've never worn it myself). Ihough I find Versace generally to be inconsistent in quality. I still don't know what to make of 'The Dreamer'....

Nice pic, by the way. Steven Bauer was quite a hottie back in the day! I watch the horrendously violent 'Scarface' just for him. Course, after his character gets killed, I can turn it off... ;-)

I actually really like the Dreamer, and should revisit it now, Tania. It sits there on the shelf unused, mostly because I prefer feminines. They seem to be doing more. Some of Versace's output is, yeah, just so incredibly trashy. The bottle for Versace Woman is even more naff than a Britney Spears release, rhinestone studded and colored glass (pink, purple), and yet I love that fragrance. It's sort of a woody, piquant musk. One of the few musks I enjoy: it has attack dog tenacity. As does Crystal Noir, which was created by one of the Etat Libre d'orange guys, one of the Antoines. It's this figgy, nutty approximation of gardenia that comes nowhere near the real thing but so what, loads of fun.

I like the new Versace (newer, for women) but don't own it. And while the latest Versace homme is a disappointment, the older Versace l'Homme is amazing, one of my favorites.

I do like the jeans alright, particularly the black, which is strange. The blue and baby blue and red, not so much.

Steven Bauer. Don't even get me started. He did a movie with Ann Heche where I literally couldn't pay attention to anything else when he was on screen. And I bet he still looks good.

I usually don't like masculines on myself, but I did like The Dreamer when I tested it. Then I read some reviews calling it a cheap synthetic tobacco, and now I'm unsure. I'm so suggestible, it's ridiculous!

I like Crystal Noir, too. Though to my mind there's very little Noir about it, what with the gardenia and all.

Versace Woman.... yes, I think I've passed that by purely because of the stupid bling bottle. But maybe I should give it a try. Black Jeans, ditto, though I've not liked any of the other colours.

I don't know if Bauer still looks good, I haven't seen him in anything recently. But oh, he was so ridiculously hot in 'Scarface' and in silly 80's 'erotica' like 'Thief of Hearts' and that Red Shoe Diaries segment he did. Talk about watching trash just for the pretty.... But a movie with Ann Heche? I don't think I've seen that, will have to look for it.

Perhaps he might have become a biggish star eventually, being both beautiful and talented. But apparently he got heavily into coke and so, bye-bye career. I think he's back now, though.