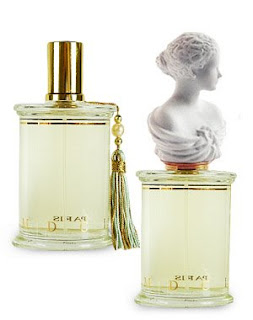 Parfums MDCI is a perfume house for fragrance fanatics. They are making brilliantly beautiful, classically styled perfumes that smell as if they’re using the highest quality ingredients. Parfums MDCI may be expensive, but rest assured, if you fall for one of their gems, you’ll probably overcome the sticker shock. Plus, you can always choose the less expensive bottle, the refill without the bisque stopper. I purchased one of their sampler sets (directly from Parfums MDCI in France, an amazingly good deal) and am working my way through all of their scents. I fell really hard for Un Coeur en Mai, one of their newest creations, composed by Patricia Nicolaï. It’s simply breathtaking, in a beautiful, flawlessly executed manner.

Un Coeur en Mai is strongly reminiscent of Guerlain’s Chamade. I’m actually surprised LT didn’t point this out in Perfumes: The Guide, suggesting that Chamade has already been done, and done better, so why bother with Un Coeur en Mai? Un Coeur en Mai is a greenish floral, also a bit similar to Patricia Nicolaï’s Le Temps d’une Fete, from Parfums de Nicolaï. Yes, its obvious Un Coeur en Mai has some predecessors, so it’s not groundbreaking or unusual, but boy, oh, boy is it gorgeous. For the past three days I’ve been wearing three perfumes; Un Coeur en Mai, Chamade and Le Temps d’une Fete (on separate spots to compare). Hopefully these three fragrances are similar enough to those around me so they don’t think I smell like a fragrance disaster.

Un Coeur is a sweeter and gentler Chamade. The start is rather fruity floral and full of hyacinth and lily of the valley. Beyond this, I don’t find the specific notes detectable, aside from being able to label Un Coeur a fresh, green, slightly sweetly white floral. It is not too sweet by any means, and also don’t be afraid of the lily of the valley note, it’s not sickening or pungent or too innocent, as some lily of the valley scents can be. There may be some among us who don’t find Un Coeur interesting enough or may call it “boring.” I definitely have days when I crave an interesting fragrance, something edgy and unusual, but I also have just as many days when I want to wear something simply gorgeous, and Un Coeur en Mai is just that, flawlessly perfect, especially for spring and summer.

I’m enjoying every moment of Un Coeur en Mai and am now having a heck of a time deciding being purchasing a full bottle of it or Enlevement au Serail...or others from MDCI as I work my way through their fragrances.

Chuckling here...as a Le Temps d'une Fete fan, and one who carefully cultivates "unkempt" in her garden, I suppose I'm one of those who'll end up preferring the Nicolai to the MDCI. Of course, I am going to have to sample Un Coeur en Mai multiple times to be sure...

Hi Abigail: I also recently received an MDCI sample set (5, not 7) and am slowly working my way through them. I saw you post this yesterday and decided to wait until I got home and put a bit on before reading the review.

You're right, of course, uCeM is beautiful (though not exactly my usual taste). I'm glad you mention not being able to pick out specific notes, because that's exactly what I thought awhile after I put it on: I could sense "floral" without being able to distinguish anything in particular. I got a hint of rose, but the whole composition is certainly well blended. And no, certainly not edgy or unusual.

Now Invasion Barbare... there's a very complex and magnificent scent, and I look forward to testing it further, along with the rest of my samples.

(NB: you must have your reasons, but I'm thinking you may want to consider not requiring a blogger account to leave comments...?)

I also have days when I want an "unkempt and rustic" perfume :-) so I totally get it. For instance PdE Ambre Russe is sort of like a rustic Teo Cabanel Alahine and I love both.

Un Coeur en Mai, similar to Chamade, changes quite a bit from start to finish, so when you try it, definitely give it a full wearing.

Joe,
Invasion Barbare is crazy good. I *forced* the hub to wear that one because it is a bit too masculine for me (even though I wear plenty of masculine scents, IB just screams "very sure of himself manly man" to me! ;-)

I'll have to check into what you mean about needing a blogger account to leave comments. I actually didn't even realize this. We don't want all anonymous comments, it's nice to know we were are "chatting" with, but I'll check this out. Thanks so much for bringing this up!

Gah. I'm wearing some of my sample set of MDCI uCeM today and have the same reaction as every time I wear it... I just want to swim in this, live in this, and walk around with my nose firmly planted to my wrist all day.

I only love a few perfumes this much. And now, reading this post, I'm thinking that I definitely have to try Chamade.

So here's my question: the edp or the edt? Are they really different?

Isn't is DIVINE? I feel the same about Un Coeur en Mai.

re: Chamade - I've only had the edt - and I love it - though longevity is not so great. And while it's not popular opinion, I do prefer the MDCI over Chamade. There is enough similarity that you ought to try both...if only for historical reference.