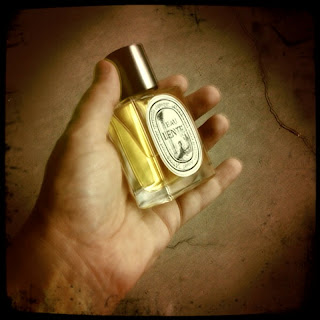 When I first smelled Eau Lente, months ago, I wasn't crazy about it. Sometimes, I have bigger fish to fry, and this was one of those days. I was debating more heavily-discussed fragrances, and the bit of Eau Lente I'd sprayed on my arm seemed wan by comparison. The squeaky wheel got the grease. I can't remember what I walked away with, but it's hard to believe, smelling it now, that I ever thought Eau Lente was timid. While it isn't Poison or Giorgio, both near contemporaries and handy comparisons, it's no shrinking violet, either. It lasts very well, is immensely interesting, and has the power to initiate or terminate conversation. I'm going to venture a guess and say I'll end up wearing it more than whatever I chose back when we first crossed paths.

I've loved Diptyque since I first heard of the line, back in the mid- to late nineties. Several cool people I knew had the candles--probably Figeur/Philosykos, which came out in 1996. Philosykos remains one of the best fig fragrances, and has been much imitated. At the time, there was nothing like it. Though it was a slight change of tune for Diptyque itself (more food, less spice) the fig fragrance showed how ahead of the curve the company tended to be. Diptyque really was one of the first niche lines to permeate my consciousness, and throughout the nineties and onward, before I ever heard of Lutens, L'Artisan, Malle, Bond, or Rosine, I'd smelled and appreciated some of those earliest Diptyque scents, if only by candle.

It's only now, years on, that I can appreciate how forward thinking the line's really been. The latest fragrances have been much less compelling to me; otherwise, I suspect I might have had occasion to undergo some sort of reassessment sooner. Diptyque isn't quite--okay, not nearly--as cutting edge now as it was. The line still produces some lovely things, but the shock of gorgeous strangeness is lacking most of the time. In many ways, L'Ombre Dans L'eau (1983), with its shockingly bright burst of dew on roses, seems like an important transition, pointing the way toward the company's future florals without turning away from the idiosyncrasies of its past. Opone (2001) turned back to the past altogether but failed, for me, to resume some of those earlier qualities. For the most part, I'd forgotten about the line until recently.

Diptyque began as a purveyor of home furnishings and printed fabrics. Eventually they added candles to the inventory. The candles, even now, sell very well. The hand drawn quality of the packaging feels consistent with the aesthetics of the sixties, the decade during which Diptyque was launched; it makes even more sense when you learn that the company was created by a textile designer, a set designer, and a painter. They don't seem to be doing much at this point beyond the candles, room sprays (may I recommend the sublime John Galliano and Pomander?), and body care (fragrance, lotion, butters, soaps) but I suppose that's quite enough. I suspect part of what made those earliest fragrances like Eau Lente so fantastic was Diptyque's identification as something other than a manufacturer or personal hygiene product, and its open embrace of 60s homeopathy.

L'Eau (1968), the first scent, is one of my favorites, a compellingly robust, nearly boozy, arrangement of clove, rose, cinnamon, and sandalwood. It's heaven in a bottle and the farthest thing from anything you'd find in your average body shop. It smells more like something you'd find in some chic, French hippie apothecary, as do L'Autre (1973) and L'Eau Trois (1975). L'Autre is a veritable spice cabinet--cardamom, pepper, cumin, coriander, caraway, nutmeg--the combination of which, for once, finds a way to subdue carnation. Some people hate L'Autre. Okay, many people. It's a dividing fragrance. I love that about it. To blame this on the cumin is giving cumin an awful lot of credit. L'Eau Trois seems to have been discontinued and I'm glad I found a bottle. There's a lot of myrrh in Trois, but there are other things as well: caraway, rosemary, pine, and olibanum. These fragrances looked forward many years to the spicy gourmands and orientals many perfume lovers take for granted, and still they manage to surprise and even shock. There's a purity of intent to them you don't find as much anymore, not even in fairly fearless commercial enterprises like Lutens.

Eau Lente came a little later (1986), several years after neon rosy L'Ombre, but it relates very strongly to the company's first fragrances. It is to opopanax what L'Eau is to clove and Trois is to myrrh, but cinnamon plays a central role, as do other unidentified spices. Unlike Ligea La Sirena, another opopanax-based scent (Carthusia), Eau Lente doesn't feel very powdery to me; nor very vanillic. Many disagree. Some say it smells like Old Spice. I don't really get that either, though I do get a little of that after shave vibe from yet another opopanax fragrance, Imperial Opopanax (Les Nereides). For me, Eau Lente remains spicy from start to finish. Like the other early Diptyque scents, it remains compelling and robust throughout. I can see a direct link between Eau Lente and Rousse (Serge Lutens), which is equally bold but gentler, and more floral in feel. Really, though, there's nothing like it. Lente smells as new to me now as it must have to those who smelled it when it first came out.

I have tremendous admiration for Diptyque and appreciate these fragrances, which over the years have offered something truly singular in terms of vision, quality, and pleasure.
Posted by Brian at 9/09/2010 09:35:00 AM

I love Diptyque too! I own Philosykos and L'Ombre dans l'Eau but I don't know if I've tried Eau Lente. I will have to now. thanks for the great review.

@kjanicki, those are the two I own as well. There are certain scents I love so much it hurts and I don't actually wear them very often, those two are among them.

Glad to see Diptyque getting love, I kind of feel like they're my L'Artisan, if that makes any kind of sense.

What a surprise to find you reviewing this one! I'm glad to see it getting some love. Where I live it's often cool and foggy, especially this summer, and the warm spiciness of this fragrance helps bring brightness into the soft gray day. It is bold in a way, but it also melds so well with the skin, so maybe that's why it didn't stand out so much to you the first time.

What a pity they stopped their unusual creations. "L'Eau trois" was very mystical. It was so close to the smell of the old churchs in France, a mix of cold stone, of mould and incense. Like for L'Autre, the reactions were always very strong.

Hi everybody. From the line of Diptyque i own L' Eau, which i selected without knowing anything about the perfumes of this line. I immagined it would be some light, transparent eau de cologne, which it is. But not only. It stroke me with the combination of rose and carnation blended with this fresh feeling like if you're drinking a glass of iced Perrier. Unusual, breezy, summer-y. I also tested Do Son, which i found tropical and realy nice. The body lotion is awsome.I want to buy all the body lotions of every perfume they make. A bientot.

Nice to see Eau Lente reviewed! Opoponax makes me weak in the knees. The first time I smelled EL last winter, I knew it was love. I got a very generous large decant from a fragrance pal, and I treasure it. It is one of my favorite sensual comfort scents. You are right that it is deceptively simple. It is perfect like cashmere is perfect or a perfect pair of jeans. It is just wonderful stuff!

Really enjoyed reading this review and somehow it makes me appreciate the scent even more. I've got a decant of this and find it a real commitment to wear for the day (lingers forever) but on the right day, it really works.

Great clear cogent review. I can't agree more. It's a glorious fragrance and one that takes no captives. You either love it or hate it. In fact I would say that the fierce cinnamon opening puts many people off (me not included) but then when they smell it a while later they backtrack stumble, no, fall in love with it. It has been reformulated to toe the line for those sensitive to various components in cinnamon. I have smelled it. It's got less bite at the top and suffers a bit for it but not overly