Eye of the Needle: Sartorial 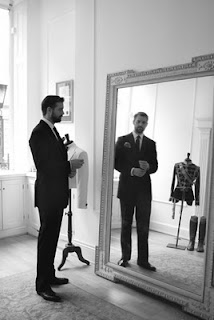 I'm not starved for blessings, but I don't tend to hit the jackpot very often, so I was really excited to win the latest Penhaligon's fragrance in a draw conducted by Indieperfumes.
I haven't been the most ardent fan of Bertrand Duchaufour, Sartorial's creator. Like Jean-Caude Ellena, he works within an artistic vein I can appreciate but find hard to enjoy. The transparency of his best work for L'Artisan, Comme des Garcons, and Eau D'Italie left me irritated more than intrigued, and the conversation around the alleged pleasures of these fragrances still baffles me. Their merits I can acknowledge; the experience of wearing them is something else altogether. Nothing baffled me more than Nuit de Tubereuse, which was the source of much talk online and seemed less rather than more interesting than the other things Duchaufour has done. I feel like I should get that out of the way.
That said, there are a few Duchaufour fragrances I really love. Amaranthine continues to grow on me, and I know that when my small, second decant runs out, I'll be considering a bottle. S.T. Dupont, going back to 1998, is a truly great fruity chypre. Lalique's Flora Bella is pretty lovely, too. But Jubilation XXV is the real treasure for me. I save the big bottle like fine china, I love it so much. Words fail, which I why, loving it as I do, I've written so little about it. I save it for special occasions which never arrive; no occasion seems special enough for this fragrance, which smells like a million bucks and a new lease on life. I love Jubilation so much that I pay close attention to whatever Duchaufour does, because I know that he's capable of great things.
Sartorial is no Jubilation, but it's pretty damn good, and reason enough for its own kind of excitement. Intended as a tribute to and an evocation of the bespoke tailors along London's Savile Row, Sartorial is steam, fougere aftershave, and metal sheen in a bottle. Many fragrances set out to pay tribute in this way but few seem ultimately to bear any relation to their alleged sources of inspiration, or do but only in the most literal-minded way. The wonderful thing about Sartorial is--
Well, there are many wonderful things. What I love most I think is how well designed and executed it is, not just the packaging, which can often seem like an afterthought on its own, but the fragrance itself. It feels like such a gift to the weak, effete world of masculines; bold and imaginatively rich, it engages its wearer and his or her social intimates in a conversation about what masculine is and might be, veering just far enough outside preconceived ideas to keep the dialogue fresh.
The beeswax (prepare for pun) seals the deal. How Duchaufour keeps this element from taking over without sacrificing its sweet, resinous characteristics is a mystery I'll leave to someone more qualified. You feel it could have gone over the fence, dominating the fragrance. Instead, it peeks out from the margins, inflecting every other impression you get as the notes waft in and out of your consciousness. The fougere profile is unmistakable, and at varying points seems as if it too might take over. You get those ferny elements; the woods and herbal touches--but the dull, milky sweetness of beeswax, along with vanilla, cardamom, linden, ginger, and ozonic elements waft steadily in and out, complicating and expanding your initial impressions.
To wear Sartorial is to be made aware of how careful a balancing act great perfumery must be. Still, it feels inarguably modern, speaking to traditional perfumery from a contemporary vantage point. Conducting that conversation successfully, so that each voice rings distinctly at different times, in unison at others, requires delicate calibration. When discussing a good perfume, people often say that no one note is distinguishable from the others. Sartorial tweaks things so that, while no note can be distinguished from the others necessarily, each continues to contrast itself against another, showing you something new.
I think I'll probably wear the hell out of this.
Posted by Brian at 9/05/2010 10:37:00 AM

Thank you for the great review. I'm not a big fougere lover, but I really want to try this. I think it's amazing the way Duchafour can make something seem simultaneously modern and evocative of a classic past. I htink his work for Penhaligon's has been great.

You know, I'm not a big fougere lover either, and I don't tend to like ozonic notes. So I was pleasantly surprised. Did you smell the orange blossom for penhaligon's?

I bought the Orange Blossom! I love it and I wore it almost every night to bed this summer, and on days when I wasn't testing something else.