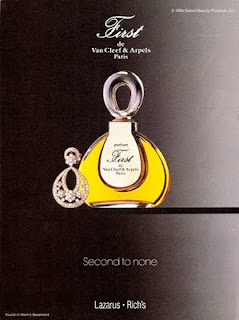 I never really thought much of the flagship Van Cleef and Arpels fragrance, aptly titled First. It seemed a lot like Chanel No.5 to me, and not just due to its overdose of aldehydes. There are many aldehydic perfumes I love, and many don't smell much like emblematic No.5. Arpege, old and new, is much warmer to me, for instance, and smells as much of the tobacco pouch as the flower garden to my nose. White Linen is its own wonderful beast, a bottle full of unique radiance which, however floral, reminds me more of a spring day than a perfume.

Not that one thing smelling like another has ever stopped me from buying it. I found a fantastic fifteen dollar Vicky Tiel aldehyde several months ago, which I'm convinced smells even more like No.5 than the real No.5 does, and I have many florals and green chypres and orientals which would be indistinguishable from one another to your everyday nose. Similarities don't bother me. More of the same is great if I liked it enough to buy it to begin with. The truth is, I'm not a huge fan of No.5, and that was my biggest problem with First.

I want to like No.5. I keep trying. I do actually "like" it. I think it smells great. The issue I have is that it smells great for all of ten minutes on me, no matter which concentration I apply. I appreciate the iconic recognizability of No.5. You know it instantly, and over the years it has cut such a wide swath that it means something to nearly everyone, whether its name is known or not, so in some ways it can operate interestingly in a room, unifying or dividing people in mood or mindset on a level beyond your average bit of social anarchy. You feel the presence of various dearly departed figures, and suddenly the room has doubled in size. But every time I try to conjure this alchemy on my own skin it goes flat, like a genie bottle whose genie I can't figure out how to summon.

Before things fade, First isn't as ladylike as No.5. After a night of carousing (however chic the pitstops) it checks in at the barnyard before continuing on to the manor. First has a simmering honeyed warmth you don't find in anything Chanel, as well as a slight booziness. There are strange, plush dissonances at play. No.5 is a much more remorselessly chilly affair, bent on leaving you hanging. The focus on lemon and bergamot in No.5's opening moments sharpens the initial effect of the aldehydes. First switches out lemon for mandarin, and the addition of blackcurrant gives it a tart succulence I really like. Both perfumes have the jasmine / rose combo you might expect from a perfume of this particular subset of classic perfumery. But No.5 is all about cool, aloof orris for me in the heart stages, while First plays around with Ylang-Ylang and hyacinth.

The rage over the last several years for iris (and other things, like, say, oud and vanilla) has kept me until recently from paying much attention to notes I might actually hype myself if given the platform, but it becomes increasingly obvious to me that Ylang-Ylang really does it for me. Part of this is my ability to identify it a little more clearly these days. Cheap-o Histoire d'Amour, by Aubusson, helped. A recent favorite of mine, Histoire contrasts Ylang-Ylang with a particularly dry, woody patchouli. It has a rubbery succulence not too dissimilar to First, and a slightly off quality to it.

I only know how much I like First now because I came across a bottle of the EDP concentration a few days ago. Unlike No.5, it seems, concentration does effect longevity when it comes to First. The toilette made First seem a lot more like No.5 than it actually is. It was so fleeting on me that I had no idea really what to make of it. Maybe it stopped at the barnyard. All I know is, it stopped altogether. I couldn't make it out. The EDP extends the dry down significantly, giving me time to notice how fantastic First truly is. I assume the civet is synthetic, if really there at all anymore. No matter. The Ylang-Ylang provides ample interest, an edgy, vaguely mentholated frisson. Vetiver and vanilla contribute to its sense of warmth with a subtle earthiness. Oddly, First reminds me at times of Opium, now that I've absorbed it. I wasn't surprised to see that Opium lists Ylang-Ylang among its heart notes. I'd never noticed that, either.

Apparently, First is harder to come by as an EDP. It makes me wonder how many people have dismissed the fragrance, like I had, simply because it didn't sit still enough for a proper appraisal.
Posted by Brian at 9/04/2010 11:18:00 AM

So glad you discovered the joy of "First" . I loved it at first sniff ...a lot of perfume puns there it seems.

Anonymous said...
This comment has been removed by a blog administrator.
September 04, 2010

I was very surprised to learn recently that First was done by J-C Ellena. I haven't had a chance to smell it yet, though I've toyed with buying it unsniffed, but it sounds so very different from his usual spare style. (In fact, most of his stuff, I find hard to love, it's just not present enough to me, though I like the accords.)

Anonymous said...
This comment has been removed by a blog administrator.
September 04, 2010

Hey Angela. Yeah, I've had a bottle of the edt for a long time, but it was pushed back to the very back of the cabinet. I saw the edp out at a mall kiosk and figured I'd give it a smell. Really glad I did.

Elisa, I was surprised too. It's almost like he was getting something out of his system. I'm with you when it comes to his spare style. I do like Elixir des Merveilles, Declaration Essence, and Kelly Caleche, but only in a pretty specific way. Of those, only Declaration really grabs me. I feel like there's something anemic about what he does. I gravitate toward the excessive expressionists, like Grosjman, Flechier, all those. And I'm realizing too, as time goes on, that I like more democratic noses when it comes down to it. Ellena seems pretty specialized if not elite to me.

Anonymous: why anonymous? You make it very hard for me to get in touch with you to pay you for your services as publicist and ego boost.

"Democratic noses" -- yes, what a great way to put it! I feel that way too about Grojsman and especially Roucel, something about the willingness to slum it is so appealing. I find that somewhere around 15-25% of the time I want to wear a "trashy" scent, and Ellena seems constitutionally incapable of trashiness.