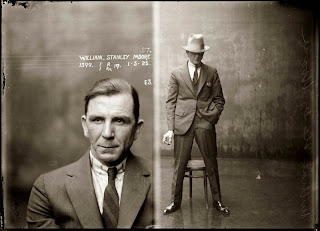 A few years ago, when I discovered that Bonwit Teller carried the Maitre Parfumeur et Gantier line, I bought a few of my favorites over the phone. At that point, it was hard to find some of the older MPG fragrances - like Eau des Iles, Parfum D'Habit, Camelia Chinois, and Ambre Precieux. Even the stores that did carry the line didn't seem to include such rarities in their inventory, and one day, talking to the sales associate, I discovered there was one so rare I'd never even heard of it. Soir d'Orient had been reviewed three times on Makeupalley.com and averaged a rating of four and a half. It was described at the time (pre oud craze) as a leather amber with smoked vanillic facets. And Bonwit Teller hadn't carried any in quite some time.

Fast forward to 2012, when MPG announced the release of a new fragrance called Ambre Dore. More than a few comments online remarked at the similarity of notes between Dore and D'Orient. Were they the same fragrance? The notes I could find for Soir d'Orient included amber, oud, and leather. The notes for Dore: essence of oud, ambergris, saffron, styrax resin, coriander, myrrh, and vetiver. Fragrantica eventually cleared the air with its listing for Dore. According to them, it was in fact a reissue of that 2006 rarity formerly known as Soir D'Orient. The craze for oud made this once special issue fragrance, exclusive to the Eastern market, now marketable to the rest of us.

My hopes were pretty high for Dore, as Soir D'Orient, its former incarnation, represented that now practically extinct thing in perfumery - something I wanted but couldn't get my hands on. And while almost no fragrance I can think of could possibly fulfill such built up expectations, Dore makes an admirable go of it.

The few reviews I've read commend Ambre Dore for its robust, animalic opening. If you consider oud animalic, they might be right. For me, it's a smooth, ambery melange which smells a little like leather but more like what we've all now pretty much agreed is "oud". Whether this is "oud essence", as MPG says, or good old fashioned cypriol I can't tell you, but it's pretty fantastic either way. I don't know what I would have made of this opening four or five years ago, before oud became so ubiquitous in niche perfumery that it might as well be fig or iris. I might have regarded Soir d'Orient as "slightly medicinal", which is how we were all describing oud back when it made its first, feeble bid for our attention. I wouldn't have helped support its journey West, I suspect.

By the time I finally caved and bought a bottle of Ambre Dore, I'd been searching for the near perfect amber for several months. Ambre Dore comes nearer to that near than anything else I've gotten my hands on. After its wonderfully rich opening, it settles down into a slight variation on the wonderful Ambre Precieux, with touches of resins and vanilla, a fairly old fashioned take on the classic amber fragrance, which is the kind of thing I like. Ambre Russe has this quality, to some degree, though it perks things up with apple. Lutens' Ambre Sultan, despite all the herbs, is pretty old fashioned. Still, Sultan is too much of a skin scent for me; Russe is wonderful in almost every way, and I can't tell you in just which way it isn't quite as wonderful as I'd like it to be. I like some amount of oomph in an amber, and some of my favorites, much as I love them, get a little too powdery a little too quickly. When they don't get powdery, they start to smell less like amber. Even once it mellows considerably, an hour or so in, Ambre Dore has that kind of weird, edgy quality it showed in the opening. It dries down as satisfyingly as it starts out, and for me it's amber bliss.

Even more than the amber, I love the oud, which has surprised me. Oud is so over-exploited now that I cringe at the sound of the word. Everyone has a wonderful new oud, which smells no more or less wonderful than the last. Oud seems to have finally given niche perfumery the excuse it was apparently looking for to boost its prices laughably high. It was a real dilemma: how do you package perfume in the same old bottle but charge more? Oud answered the question, however insipidly. You import "costly" oud "essences" from the East. We are now in the Baroque Oud period, where niche lines release their second, third, and even fourth oud fragrances. Their last oud smelled like every other, but they convince someone (if not me) that they have something new to say with the material, which is invariably synthetically composed, no matter the claims of faraway and hard to reach origins. Nothing is hard to reach anymore, but oud convinces us that state of covet versus lack still thrives, right under our noses.

Ambre Dore is an oud fragrance which doesn't scream oud. No mistake, you smell the oud in it, but it's incorporated as a supporting player - perhaps because Soir d'Orient came out at a time when oud wasn't something to write, let alone leave, home about. Ambre Dore used oud with the kind of subtlety that no modern oud release can really afford to, and wins me over for that. It's a pretty exceptional scent.

If anyone else has favorite ambers I'd love to know.

I'm not an amber lover! It's funny. Amber seems to be one of the favored categories among the online perfume folks, but it's not a great love of mine, really.

The ambers I like tend to be twisted into some other fragrance trope in some way. Nez a Nez Ambre a Sade (doused in berries), Atelier Cologne Amber Nue (made transparent and citrusy), and Tauer Orange Star (buried in orange peel) are probably my favorite ambers. I also like YSL Cinema, but that's mostly because I wore it in pre-perfumista days - I don't know that it's completely to my taste anymore, to be honest.

On the MPG note... I really like the line. Doesn't seem to get a lot of love online, sadly.

LOVE Ambre Fetiche, Diana. One of my favorites. 114 keep trying out when I run into it at the store. Does it last? I can never decide. I love that Histoire finally caved and started making half bottles.

I like Ambre a Sade a lot. It's a weird use of...is it strawberry? I actually just wore it yesterday. The Amber Nue is nice. I'm coming over to the Atelier line. The last few have really won me, especially the Mistral Patchouli. A friend I was was working with in January kept wearing a sample she'd been given at Luckyscent, and after about a week I was addicted.

Amber is a favored note for me. I like finding it mixed with other notes and I like it when it is the star. It is compelling.

My favorite ambers: Annick Goutal Ambre Fetiche! I love it by itself, and I adore it layered with one of the companion fragrances from Les Orientalistes collection - Encens Flamboyant and Myrrhe Ardente.

Perfumes that have amber as a starring role, but not a solo act, I like Teo Cabanel Alahine, Paul & Joe Bleu, Guerlain Attrape Coeur.

Amber. Aaaah. Love it.
Thank you SO much for your review of Ambre Dore!

Definitely strawberry in Amber a Sade, and I think a few other varieties of berry too. I'm glad to know someone else who likes that one! Nearly everything I've read about Nez a Nez in general is negative.

I've got a sample of the Mistral Patchouli, but haven't worn it yet. Tomorrow, maybe! I've been loving Atelier lately - I liked the originals but I think I'm finding the newer ones more unique.

I purchased a back-up after reading your review. MPG aren't listing it on their site. Was this just a limited release? I have been on an amber binge with Alahine, Bleu, Or des Indes and others. Ambre Dore represents an end to this phase. Love your work!

Oh no. Really?? It must have been just a blip on their brand. I never went to their site so maybe it was never there? I believe I got mine on...Fragrancenet? Or Parfum1. One or the other. Thanks for the compliment. I'm enjoying amber a lot too - still. Alahine is one point of the star that is my holy grail hot spot.

Great review and most helpful given the rarity of reviews on this under-marketed, yet wonderful fragrance. It actually reminded me of a rather forgotten masterpiece, YSL's M7 (vintage) in its masterful interweaving of Amber and Oud. I can smell myrrh as well, which arguably coheres the said elements beautifully. What I can't help wondering about is why they don't produce it in eau de parfum concentration, which would give it more sillage / projection and longevity.
Another favourite ambre (that will never fade away, I hope) is SL Ambre Sultan and Hermes' Ambre Narguile.