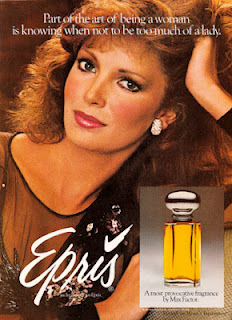 If I'd been looking for a spokeswoman in the eighties, and had a sultry perfume to sell, Jaclyn Smith wouldn't have been my first (or second) choice. While not exactly strawberry shortcake, she was never really the let's get right into bed type. Had I seen the Jaclyn-centric ad for Epris before smelling this 1981 Max Factor fragrance, I doubt my curiosity would have been triggered. Fortunately, I found a mini at some antique store last summer, traveling cross country with my mom (I don't advise this, by the way, unless you can keep your travel time down to under five hours or you're going convoy style in separate cars).

Until a week ago, I enjoyed this mini periodically but had no idea what it was, and much as I liked it, I didn't really investigate. I don't think I even checked the bottom of the bottle, where the label indicates the name. I assumed it was some Youth Dew era oriental, a one off that didn't make a wave (though it clearly should have) and barely made a dent in the mass market culture of suburban perfume lovers. At some point I even thought it might actually have been decanted from a larger, more recognizable fragrance by another traveller who, like me, needed some back up on the road. Who knew Epris was listed on Fragrantica all this time, or that I could have very easily looked into it before now?

Fragrantica lists Epris as a chypre floral. My immediate thought, reading this, was that if Epris is a chypre floral, Bandit is a fruitchouli in a faceted pink bottle. Epris doesn't even smell like a floriental to me. It's straight up balsamic oriental, with the usual suspects hiking up their skirts: patchouli, spices (clove, clove, and clove) and a generous scraping of civet and castoreum. It has a leathery feel instantly, rather than drying down to one, and while there are florals in the mix, as in Youth Dew, they've obviously been told to sit down and shut up. This fragrance wants to get horizontal, and it wants to get horizontal now. After gymnastic somersaults through spiced amber and barnyard, it gets a little powdery in the late dry down, as if to say, "Yes, that's my bosom you're smelling."

"Maybe your mother never told you," begins the television ad, "there's more to being a woman than minding your manners." You might easily assume, hearing Jaclyn Smith say this, that she's just sucked on helium. Maybe it's the quality of the recording in the version I watched. Either way, as with the designation "chypre floral", there's a real disconnect between the way the fragrance is made to sound (girly) and the way it actually smells (far end of post pubescent: pun intended). "Being a woman means sometimes taking the first step first," Jaclyn continues, after introducing herself in a sequined, mostly sheer black dress reclining on a plump leather sofa. Again, I would say leap, not step, because Epris is clearly an attack mode type fragrance, with a physical vocabulary ranging from pounce to pulverize.

Epris, says Jaclyn, is a fragrance that understands this "first step first" thing. "Epris is a little unsettling; a little disturbing. Epris is a most provocative fragrance. If mama never told you, I'll tell you: Part of the art of being a woman is knowing when not to be too much of a lady."

Whatever the tone of her voice, at least the dialogue speaks truthfully about the perfume. While the initial impression of Epris is along the lines of Youth Dew, it soon takes a slight but hard left turn toward Tabu, putting itself in park somewhere in between. Even in an era characterized by bold, forceful constructions, Epris was something of an oddball, looking back lustfully not just to Youth Dew (1953) and Tabu (1932) but to one of my all time favorites, Bal a Versailles (1962). It dives straight down to patchouli and animalics without bothering to ask you if you mind. There's that kind of confidence in it. It's on the prowl and thanks you very much for letting it out of the bottle to get the ball rolling, but no time for niceties. It don't mind if it do.

There's a taste for this kind of thing, and not everyone's salivating over it. I'm grateful, because it's scarce online, unless you want to stock up on minis until you have something approximating full bottle. I'm impressed with everything about Epris - the fact that Max Factor produced it, its tenacity, its husky attitude, its uniqueness among its eighties peers as an old school, unapologetic oriental. It's been a long time since I smelled something this good, and I was happy to find a seller online who was offering two one ounce bottles. How much do I like Epris? Better than my favorite Serge Lutens fragrance (a tie between Cedre and Arabie, in case you're wondering). Once again, I'm reminded that some of the most satisfying fragrances have been sold at the drugstore, for a steal, and they didn't even have oud in them.
Posted by Brian at 3/16/2013 05:25:00 PM

Scrapings of civet and castoreum? Brian, I'm so glad you're back!

It reminds me a little of Bal a Versailles, Olfacta, which reminds me of you. I love all the animal in Epris. I'm just glad I'm not tasked with the scraping.

Lovely writing here, Brian. It really made me smile. Guess I will have to go look for Epris now...

I think you probably just started a run on Epris.

Thanks, Queen. It's a scent with a sense of humor.

Susan, I hope so! The thought of influencing people to get and wear perfume fills me with beatific contentment.