Wind Song: Home Is Where Its Heart Is 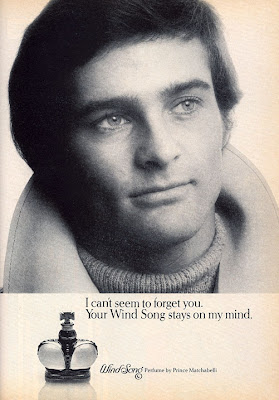 I have only the vaguest recollection of the Wind Song now being sold in drugstores. I remember buying it on impulse and, a few days later, returning it with my wits about me. The word that comes to mind is dowdy. Mumsy runs a close second.

So I'm surprised how much I like the vintage version I found in a local antique store for twenty bucks (about all I was prepared to shell out for it, based on my forgettable first encounter). First things first: let's get the bottle out of the way. What even casual vessel fetishist among us could resist the glass crowns which housed these early Prince Matchabelli scents? Who among us wouldn't like this thing sitting out somewhere on the dresser? Seeing pictures of them online, I'd always imagined these bottles were interchangeable with an arguably much more useful half pint of Crown Royale. Holding one in my hand I see how wrong I was.

Wind Song (1953) is unmistakably a floral in the fifties sense of the word. The goody two shoes carnation you expect from a good girl fragrance of that era is front and scenter, and for those who don't like carnation it can be a bit of a deal breaker. That's too bad, because Wind Song has a lot besides dowdy going on, and it does things I don't think I've smelled in any of its contemporaries. After you adjust to the carnation you ascertain some of the bit players who've been drafted in to support and enhance it: coriander, mandarin, tarragon, among them. If the era's aldehydes could be considered knowing and somewhat confidently if not forbiddingly aloof, its orientals thought of as contradictions of the idea that the poodles on its skirts weren't animals but "puppies", Wind Song might be looked at as a sort of Doris Day re-alignment, reaffirming the pleasures of simplicity and subtlety in the midst of these extremes. 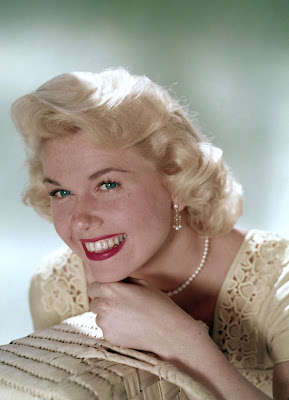 Not that Wind Song doesn't have its depths. The joke about Doris Day, the reason she's become shorthand for the naivete of the fifties, is that she was a little, shall we say...white bread? Yet to listen to her voice and to watch the stylized precision of her performances is to remind yourself of her artistry, above and beyond the cliches about her persona. Similarly, the dry down of Wind Song is really something, and that something deepens the first impressions and potential dismissals.

It never fails. Not thirty minutes after applying Wind Song I want to know what "that smell" is and where the hell it's coming from. The note list I've seen for the fragrance lists sandalwood, vetiver, amber, cedar, and vetiver in the base, and at different times I've felt I smelled all of those things. The floral component of Wind Song - which, in addition to carnation, includes some of the usual suspects, rose, jasmine, ylang ylang, orris root - never quite leaves the building. Orris root, particularly, sticks around to sit in the chair provided by the scent's base notes, making its rich, buttery presence felt for the duration. But that combo of amber, woods, and grasses is really the backbone of this fragrance, and in fascinating ways that no oriental or aldehyde could, the combined effect underscores the bedrock strength of the matronly persona. This fragrance, more than most I've smelled from its era, helps me understand why that ideal of the 1950s - the safe, secure, comfort of the home and family - was so seductive and compelling. If home could feel like golden, woodsy Wind Song smelled, why would you ever stray too far from it?

As one of the iconic ads for the fragrance asked: "What makes you the girl he can't get out of his mind?" To which another answered: "Wind Song whispers your message." Wind Song can still be found for...a song...online.  The dry down alone makes it worth far more than the going rate. Like an also cheapo bottle of vintage Avon Persian Wood I found on Ebay recently, Wind Song is the clearest distillation yet for me of sandalwood's inimitably pleasurable attractions.
Posted by Brian at 3/29/2013 02:18:00 PM

I remember the tagline as "Your windsong stays in his mind..." in fact, I think there may have been a song to it, because in my head the line is repeated. Although I remember the advert, I don't remember ever smelling the perfume!


The song went "I can't seem to forget you, your Wind Song stays on my mind." Before that iconic jingle became the exclusive ad campaign strategy, there were print ad variations. "He can'g get you out of his mind when your Wind Song whispers your message." Etc. Sometimes the ads were from the female wearer's point of view. I remember that song and the Wind Song ads probably better than any other fragrance ad from childhood.