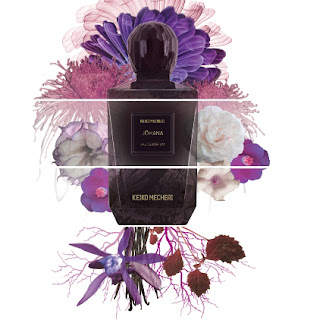 Unless cacao and vanilla combined are to be taken as the new oakmoss, Keiko Mecheri's Johana seems anything but a chypre to me, yet the fragrance continues the trend toward eroding distinctions about what is and isn't one. As with other "modern chypres", Johana seems to think being something means simply saying so. I'm going to let it go for now, even though I don't seem to age in reverse, am not devastatingly handsome, and cannot (yet) fly by flapping my arms, much as I keep saying I do, am, and can.

Johana is a nice scent with an interesting tension between deep/dark and airy/bright. It's hard to make sense of that, which might explain why I alternately admire this fragrance and wonder how I possibly could. In many ways it follows the standard MO of a Keiko Mecheri release: it stays just this side of fascinating, settling for "interesting". But it's pretty interesting, and while I dismissed it at first, I kept coming back to it, and finally (if predictably), I caved.

I haven't had the best luck with Keiko fragrances. I like many of them. There are things I admire in Mogador, Oliban, Loukhoum eau Poudree, Peau de Peche, and several others. Of these, I own Mogador. I wear it once in a while but not often, mainly because, like every other Mecheri perfume I've courted - short of overstay-its-welcome Loukhoum - it doesn't last on me as well as I feel it should. Mogador has a radiant disposition in keeping with the work of Calice Becker, its perfumer, situating it somewhere in the general vicinity of Tommy Girl, J'Adore, and Beyond Love. It doesn't want to get too bogged down in anything heavy, which is nice until you realize that means it ain't sticking around long.

Johana's been a surprise to me, mainly because it does last, but also because there's something pleasurable in it that very few other fragrances reach for me in just this way. The fragrance contains, allegedly, chrysanthemum, galbanum, rose, wisteria, iris, cacao pod, patchouli, incense, sandalwood, and vanilla. Looking at this "pyramid", I'm wondering when or if we'll ever dispense with the nonsense of "notes" in contemporary perfumery. It's like the British Monarchy. Do they really stand for anything, or do we just like the idea? Certainly the word chypre seems to mean nothing by now. Why should the fancy of a pyramid?

I'll play the game, since we're all undecided on that, and tell you I smell, at least, cacao, patchouli, vanilla, and a melange of florals I'm willing to agree falls somewhere between rose and mum. When I spent some time with Johana, I started to suspect it was created by Calice Becker, because it has that weird sunny thing she does so well, only anchored to something moodier by a gourmand gone woodsy foundation. Oddly, while I won't give it "chypre", I can tell you it has another nice tension in it, and in an unexpected, indescribable way: it feels simultaneously contemporary and old fashioned. It loses some of this the longer it sits on you, but that first spray is a little uncanny - grafting a new, bright floral onto something more traditionally (if subtly) balsamic. That's an illusion, because there appears to be nothing remotely balsamic in Johana, but everything's basically an illusion in perfumery (starting at the idea that it should cost as much as it does).

This effect lasts on me for a good thirty minutes or so. After this, Johana remains interesting for different reasons. It becomes another kind of anomaly: a dusted coco fragrance which lifts and amplifies into radiance and just-this-side-of-succulence rather than sinking down into a deep dark gourmand nether region. I like deep dark gourmand nether regions, but this is something different, and I'm all for that. It seems to me that niche lines do dusted chocolate a little heavy or moody to avoid accusations of mall-stream juvenilia. Johana manages to go in the opposite direction in a way that feels sophisticated and fresh.

One thing I do like very much about Keiko Mecheri fragrances across the board - okay, two things: the bottles, and the price point. (Disregard Mecheri's Bespoke line in this equation, btw). Name more than five niche lines charging 115 bucks at 2.5 ounces for a bottle this fantastically formidable and attractive. Something about these bottles looks like what you hope a perfume will smell like. They make their owners look like they know what they're doing. And at this point, 115 bucks is like ten cents in the world of niche perfumery.
Posted by Brian at 3/19/2013 11:02:00 AM

My eyes are in perpetual roll mode, for so many reasons. But the snob patrol's self importance gets the biggest movement. Check out johana if you get a chance. It's a good everyday, day to night fragrance.