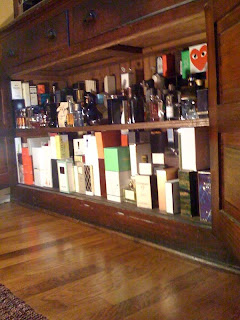 In the 2007 Spring and Summer issue of a magazine called Fantastic Man, critic/biophysicist Luca Turin was photographed sitting in front of what I assume to be a significant portion of his fragrance stash.

A second photo showed the cabinet without him.

The cabinet looks like a structure intended for the storage of LPs. There are sixteen square cubbies, each packed full. Aluminum blinds have been installed across the top but the bottles which have spilled out onto the carpeted floor would make drawing them difficult if not impossible. Judging by the photos, it looks as though Turin would have soon been forced to make a familiar decision: adapt or expand. Half of the space within each square is wasted. Think how many more bottles could be stored in the shelves if they were to be bifurcated. I picture Turin going to the hardware store. There he finds spice shelves which can be used to create more storage space for short bottles in a tall cabinet. 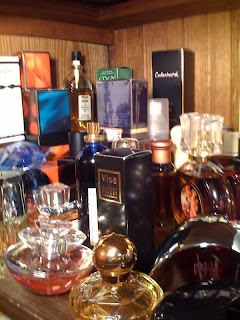 I've looked at these photos many times, identifying many of the bottles and boxes on Turin's shelves. Sometimes I spot things I hadn't noticed before, like today, when I saw a recognizable box on the lower right shelf: a black cube with Encre Noire embossed across the front in a simple, unfussy font. A long white box which previously meant nothing to me now turns out to be a collection of the reissued Lancomes: Magie, Climat, Sikkim, and Mile et Une Roses. Tabu sits on the floor, next to Tabac. The contrasting aluminum stripes of Rive Gauche are visible somewhere on the right middle shelf. Annick Goutal--Sables or Duel--sits nearby. With a quick glance I can spot Brut by Faberge, an Etro, A Serge Lutens, DKNY, Prada, the ridged round cap of a Caron, Patou's Sublime, Tommy... 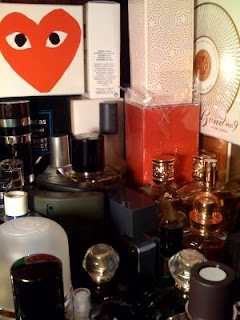 Since seeing these photos I've become very curious about other people's storage spaces. Where do people store their perfume? Would they even show me? There's so much shame and discomfort involved, at least for me. I have way too much to feign sanity. The other night, a close friend was over. She wanted to smell Lolita Lempicka Au Masculin. She followed me into the butler's pantry but I made her leave before I opened the cabinet doors. Only one friend has been allowed to see my cabinet with the doors open, and even then I'm uncomfortable. My partner likes to make exaggerated noises when he walks by, giving voice to my sickness. I remember starting out with ten perfumes. I kept them in my sweater drawer. That seemed an embrassing number to me, yet I harbored secret intentions of buying more. I asked a friend if he thought maybe I had a problem. "Do YOU feel it's a problem?" he answered. "Not really," I lied, and I've rarely looked back. Presently I have upwards of three hundred bottles. Eventually I was forced to move them to the butler's pantry. I play a game with myself. As long as I can fit everything into this cabinet I'm not deranged or impulsive. This involves a few subtractions every once in a while. 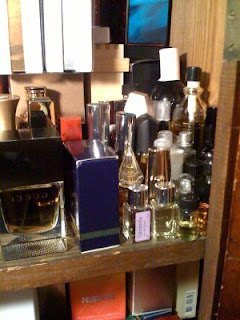 In the spirit of full disclosure, here it is: my perfume cabinet. I'll show you mine, if you show me yours. I'll show you mine anyway. I didn't organize it for these photos. I shot it as I keep it, though I rearrange regularly, depending on my moods, acquisitions, and exchanges. There's also a drawer above the cabinet, in which I keep samples and atomizers, like the many I've been sent by Abigail over the course of our friendship.

I'd love to see pictures of your stash. I read many of the perfume blogs; some religiously. Check out the blog roll on the right. Some of these bloggers write the most interesting, personal content on perfume--yet, as much as they open up about their tastes and distastes, as much as I feel I have an idea what they think about perfume, I have no idea what their versions of that most sacred perfume-lover's space looks like.
Posted by Brian at 12/19/2008 01:53:00 PM

It is gorgeous! You aren't sick unless it is impairing your life to do this. If you are paying the bills, going to work, and fuctioning? Why should anyone care if you like fragrance? If it were art, or records, or books, you would be getting respect instead of derision; many people don't understand scent, they think it is frivolous.

Exactly like fountaingirl said! I have my collection under the sink in my ensuite . Its dark and cold and very un-glam! LOL

I really love Your blog. It's full of life and passion. ;-)

I must agree with Fountaingirl: as long as You're comfortable with Your collection (any collection, not only perfume) there's nothing wrong with it. And I speak also for myself.

I hope You don't mind that I've added Your site to the links at my blog. It's in an unintelligible language, but I swear it is about perfume. :-)

I thank you all for your comments. Now send me pics of YOUR cabinets.

Have you given up milk or bread for perfume? Missed a rent/mortgage payment? If not, I'm guessing you haven't crossed any bad lines. ;-)

I'll see what I can do about getting pics your way...may need to post them on my own blog...I have a predictably bifurcated approach to my collection, such as it is...I love seeing it, and yet know about temp & light being the devil and all...so I like to keep sample vials out, displayed by nestling in sea salt, inside antique stemware. (A theory that that helps with temp regulation comforts me...as does the notion that submerging them, at least somewhat, also reduces light's affect....) Some samps also rest in antique lipstick holders. Come to think of it, I never was so girly until I started to collect perfume.

Alas, because I share a home with a collection of humans and pets, storage is a bit of a premium. I rotate among dresser drawers, shelves intended for shoes, and the Hoosier cabinet in the family room. Plus the stray bottle in a closet, or under a (temp stable and dark) vanity. Maybe more than one vanity...

I have a tall chest of drawers for my collection. I can't take a photo showing all of it, because each open drawer would block the view of the one underneath - and I guess posting six photos would be silly... ;-) Especially since all you could see would be the tops of the boxes.

But the collection is already overflowing back on to my dressing table, so I suppose it's time to do some weeding!

If you want to see others expose their collections, check; http://www.fragrantica.com/board/viewtopic.php?id=407