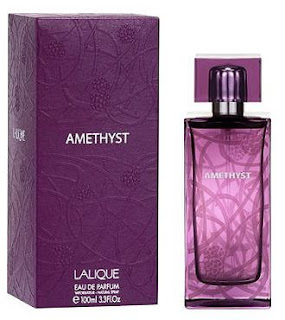 Lalique’s newest fragrance, called Amethyst, was created by Nathalie Lorson and launched in Europe in 2007. Amethyst recently arrived in the U.S. around September, 2008. The idea of berries and musk doesn’t make my heart race but I was hopeful. I have L’Artisan’s Mure et Musc Extreme and imagined it would be similar and (optimistically) better. I’m not among the legions of devoted lovers of Mure et Musc, I don’t dislike it, it’s just ok for me.

Of course, Amethyst, being from Lalique, is housed in a lovely bottle. I like it even though it’s purple which always seems a garish color to me. The bottle is nice and heavy and has what looks like hand-etched vines, thorns and blackberries on it.

The fragrance is pretty much as you’d imagine – except – it’s nothing more than that. There’s nothing surprising, nothing swoon worthy, nothing particularly high quality about it. Amethyst opens with a juicy blackberry/blackcurrant note that is very true to nature. It’s a mouth watering opening. Then, about 10 minutes in, there’s a nice berry + spices (nutmeg) + musk aroma, which, if it stayed like this, I would like it a great deal more. But after about 20 minutes it becomes a pretty yet boring berry + musk scent. Once dried down I would never guess it was Lalique, I might think it was a Bath & Body Works fragrance. Don’t get me wrong, it smells pretty, but if you’re reading this because you’re a fragrance fanatic like me, I imagine you’ll be underwhelmed.

oh dear!
I think I'll stick to my Lush blackcurranty solid perfume, then. It's called 'The Comforter' and it, too, starts with a realistic blackcurrant note, but it's cheap! ;-)
I plan to experiment with layering it.