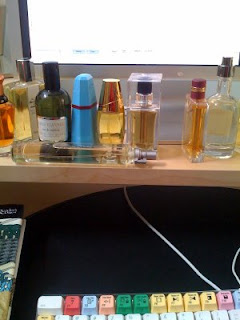 This weekend, I've been watching my friend's dogs downtown.  This is only about a ten minute drive from where I live, and I'm here all the time anyway, but being in someone else's space can feel like a vacation, if only from the static landscape of your everyday routine.  A different space offers new perspectives, making almost everything seem entirely new.  It's as if you stand back from your life and view it from a small distance a little more objectively.

I thought about this weird shift of perspective and how profoundly a subtle change can influence the mind because almost every perfume I own has smelled different to me over the last several weeks.  The air went decisively cold here, and they all seem to behave differently, like creatures shedding their fur or skin, entering into some transitional appearance or behavior for the time being which renders them practically unrecognizable from their former selves.

The biggest difference is longevity.  I used to think the difference between a short- and long-lived perfume was simply a matter of time.  You enjoyed the latter at length.  The former you kept spraying or accepted defeat.  Now I realize that the longer perfume stays on the skin, the more deeply your mind engages with it.  Even the most linear perfume, over an extended period of time, is given depth and shading by one's perceptions: the mental and emotional associations you make with it, the ability to juxtapose one environment with another as you carry it through the scene changes of your day.  Even things as apparently minute as other people's largely imperceptible reactions and adjustments to a fragrance create an ever evolving context.  Increased longevity extends the drama of a fragrance in any number of ways, in any number of directions.

You do notice the stages more lucidly, where they exist.  Some scents, like the Fresh line or Jo Malone, have none to speak of.  Others tumble down into their base notes like leaves falling from the trees, creating a series of changing shapes on the way.  I was shocked by Grey Flannel this morning.  I sprayed it on the back of my hand and wondered where I'd been all this time.  I've always smelled the violet, but suddenly everything around it had shifted, and seemed heightened.  I smelled galbanum as if it had elbowed its way in out of nowhere.  And rose: how to explain having missed the obvious for so long?  The rose in Grey Flannel presides over the entire affair in a steady, calming tone of voice.  As the scent progresses and my senses adjust to the shock of the new where I least expected it, I notice the citrus accords.  The geranium!  Grey Flannel isn't just severe, as many who've grown up with it assert, but tangy and textured, qualities for which it rarely gets credit.  The most surprising discovery for me is the presence of iris, situating Grey Flannel closer to Dior Homme than I would ever have thought to put it.  I see now that in many ways these two masculines are different generations of a similar philosophy.

This curious ratio between alleged stridency and an underbelly of subtle permutation is something Grey Flannel shares with Beautiful, by Estee Lauder.  True, Beautiful is a big boned eighties floral.  But it has more complexity than well over half the mass market fragrances presently sold at the mall, and the stridency smuggles in softer, more nuanced shapes the way shoulder pads concealed femininity behind a parody of the masculine silhouette.  What produces that tobacco accord Tania Sanchez talks about in Perfume: The Guide?  Is it a combination of cedar and vanilla?  Why is it that a scent which is famous for being overly feminine leans increasingly toward the conventionally masculine as it plays out on the skin?  In the warmer months, this drama zips along with the economy of a sitcom.  Laugh tracks and audience applause lead you in pre-orchestrated directions without giving you the time to make sense of the leaps.  In the winter, Beautiful slows down, giving you the room to wander around in it.

These are just two of the scents I'm getting re-acquainted with.  Even the ones I thought I knew seem foreign, like 1000, which seems less floral to me, more chypre, dark and moody where before it seemed bright and slightly empty-headed, too pretty for its own good, or yours.  How is it that a scent which seemed so cool in the summer now feels so warm in the winter?  Are fragrances mood rings, driven by body temperature?  The season makes velvet of fragrances, it seems to me, and I'm so busy reconsidering everything it's as if I bought an entirely new collection.
Posted by Brian at 12/07/2008 11:52:00 AM