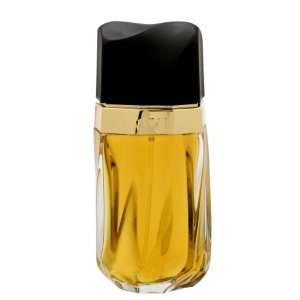 You can draw a line, however squiggly, all the way from the rosy-toned warmth of Dityque's Opone back to Estee Lauder's Knowing, by way of Alexander McQueen's Kingdom and L'Artisan's Voleur de Roses. Variations on rose, these fragrances are also, taken together, a quick, impressionistic sketch of the last twenty years or so in perfumery, moving from deep over-saturated color to faint, gestural abstraction over the course of two decades.

Knowing (1988) remains bright throughout its development; too bright by a mile, according to some. Its cheerful, high-wattage garishness, which doesn't win it many fans these days, serves as colorful distraction from its bedrock disposition, that of a dark, moody, maybe even tortured rose. Knowing is classified by Michael Edwards as Chypre - Floral. I might call it Gothic - Boozy. There's a wine note in there--perhaps the alleged plum and melon, slightly fermented. The patchouli dry down is tinged with a healthy quotient of oakmoss and civet. Nearly feral in effect, Knowing is one of my favorite fragrances, aptly named, and I return to it compulsively, having loosely designated it some kind of standard in the category of rose. It lasts well, projects impressively, and seems as wondrously out of place on a man as it is on a woman.

Knowing was released the same year as Eternity, Carolina Herrera, Boucheron, and Rumba, all big boned, sometimes fruity, florals, so angular they come across as square-jawed, crossing a line into masculinity. Interestingly, Paco Rabanne released Tenere in 1988, expanding on the urinous incense accord of Kouros, which had been released seven years prior, with the addition of rose. Tenere bears more than a passing resemblance to Herrera, as well, though for rose Herrera substituted tuberose. Common knowledge says that old feminines have only over time become more masculine. Tenere shows how slight a distance one sometimes needed to travel to get from feminine to masculine even back then.

Voleur de Roses explores some of this boozy cum bilious territory, using patchouli instead of civet. It effects the dewy voluptuousness of Knowing to some degree, especially up top, where all the money seems to have been spent, but the rose dissipates quickly, leaving a grunge which, however forthright, pales in comparison to Knowing's heady basenote cocktail. Ultimately, it achieves in its brief life span a sort of faux filth, too pretty to really mean it. After screwing up its face at you, it vanishes, leaving you to wonder what exactly you smelled or whether it was ever actually there. Voleur was created by Michel Almairac in 1993.

Kingdom was released in 2004; Opone in 2001. Opone is much drier, like spices steeped in rose oil. It registers as a descendant of Knowing, if somewhat unwillingly, as though trying to keep a distance. It preserves Knowing's moodiness but loses its diffusion and radiance. Like Kingdom, Opone smells strongly of cumin. Knowing is more richly spiced than either, with notes of cardamom and coriander against a background so vividly bright they feel enriched rather than diminished by it. Kingdom inflects its cumin with a citrus tang, relieving some of the dryness as well as adding depth. Opone adds saffron and woods to its rose motif, but these are dry additions and coupled with the linear tendencies of the Diptyque fragrances this makes for a rather flat wear. Opone comes very close to Voleur de Roses, though less transparent. It never gets as close to rose as Voleur's opening, but trumps it by staying put. Where Voleur sparkles, Opone smolders, warming on the skin. I prefer it.

L'Ombre Dans L'eau, another Diptyque rose, was created in 1983 and makes for a nice comparison with Knowing. In place of plum and melon it offers blackcurrant leaf and dew-laden greenery. Knowing might easily have been inspired in part by L'Ombre, though it is admittedly darker and deeper, more resinous in its heart, straight down to that pitchy base. As time goes on, L'Ombre settles into a nice mix of sweet and sour. Knowing, on the other hand, is positively schizophrenic, bright and cheery with a rotted out core. After twenty years, it's still a rose to beat.
Posted by Brian at 12/15/2008 06:45:00 PM

I do not know what it is about L'Ombre Dans L'eau but I buy a bottle, use it up and say "never again" and then I want it again! LOL
Though, never in summer - it is too much in the heat and humidity .
On a cold day - its heaven - sharp.

I agree; I love Knowing, and so far it is the only Lauder fragrance for me.

VdR has a certain "mothballs" quality in the drydown, IMO.

Unfortunately, for me, Knowing is unwearable.
There are certain heavy florals, like Knowing, which remind me of trying not to be sick on a long car journey as a child - I know, yucky.. ;-) Maybe someone else in the car wore a heavy scent, and it comes back to me. Obviously though, they didn't wear Knowing, as that's too recent!