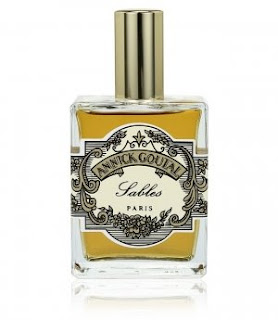 The story goes that Annick Goutal created Sables for her husband, cellist Alain Meunier, as a way of capturing olfactory memories of summer days together in Corsica. Sables was created for a man, and is labeled as a men’s scent, but it is so easily unisex.

I find Sables to be the most unique of all the Annick Goutal fragrances. The scent focuses on immortelle flower, which is oftentimes an overpowering scent, and has been described as smelling like maple syrup. Maple syrup isn’t exactly what I smell in Sables; I’d describe it as a bittersweet herbal aroma blended with a smidgen of maple syrup. The reason I enjoy Sables so much, is that while there is, indeed, a syrupy sweetness, it still maintains a woody dryness overall. There aren’t very many fragrances that I can think of that are truly sweet yet dry. Other perfumes with a similar immortelle flower note are Serge Lutens El Attarine, L by Lolita Lempicka and Frederic Malle’s Musc Ravageur. I don’t think immortelle flower is among the listed notes in Musc Ravageur, but there’s a similar spicy vanillic-ambery quality that reminds me a bit of Sables.

Sables was created in 1985 and in many ways seems like the precursor to gourmand fragrances arriving a decade later. Annick Goutal created Sables based upon memories of Corsica, an island in the Mediterranean in between France and Italy. There is an obvious dry sandy quality to Sables that immediately makes me think of sand dunes and warm sun-kissed beaches. The sandy, gritty quality mixes beautifully with notes of sandalwood and pepper to perfectly temper the sweetness of immortelle flower. I’m finding Sables to be a particularly lovely fragrance for cold weather. And, very important to me, Sables has strong projection and excellent longevity.

I smelled this today for the first time and the impression I had was: pipe tobacco and some type of liquor, maybe whisky? I also sense an undertone of wood.

Of course, every other review speaks of maple, but what struck me was the refined masculinity, a certain clubby, leathery, men's club tobacco aroma with an herbal, woodsy underneath.

That said, I really like this. It is warm, elegant, masculine, but not too strong. I would definitely buy this.