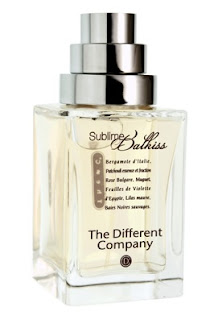 Sublime Balkiss launched in 2008 in Europe. Americans have to wait until sometime this year (2009) to have ourselves a sniff of this new juice from Celine Ellena (daughter of Jean Claude Ellena). Well, along with Frederic Malle Dans Tes Bras, Sublime Balkiss was my most anxiously awaited new fragrance. Dans Tes Bras was a big disappointment for me; all I got was salty skin and mushrooms. Sublime Balkiss is not exactly a disappointment, I actually quite like the scent, but I’m rather put off by the longevity.

Sublime Balkiss starts off with a juicy berry blast that is wonderfully effervescent. It isn’t a light fruity concoction but instead think berries in a mystical forest at twilight.

The Different Company is advertising Sublime Balkiss as a chypre, a modern chypre, which uses two types of patchouli instead of oakmoss. I’m tiring of this new term, “modern chypre” because most modern chypres that I’ve smelled bear so little resemblance to real chypres that I don’t see the point. Perhaps perfumers need to create a new label for these so-called “modern chypres.” Nevertheless, Sublime Balkiss (SB) uses two types of patchouli which are quite faint or perhaps tame and not easily detected. I imagine it’s the patchouli that gives the berry notes a serious anchor, a deeper complexity, but I don’t smell any sort of traditional patchouli at all. For those who dislike patchouli, you’re in luck, because you might find you like this fragrance quite a bit.

For a fragrance meant to highlight berries, SB is rather dry. It is not sickly sweet by any means. It starts off juicy but once it dries down it becomes a woody, mossy, berry scent. I actually love the combination of berries, woods & earthiness. I can’t explain this via the list of notes, but as I smell my arm I imagine berries growing in the underbrush of a forest. There is something dark green and forest-like about Sublime Balkiss. I don’t mean SB smells like pine or balsam but there’s an element of mossy greenness about it.

I’m disappointed with SB because this could have been a real winner for me if it projected and lasted longer than 30 minutes. I love the scent but I just can’t accept an expensive fragrance that doesn’t last. Aside from Sel de Vetiver, all TDC fragrances have been fleeting on me.

Perhaps you will have better luck with longevity. It’s a nice scent and one worth trying.