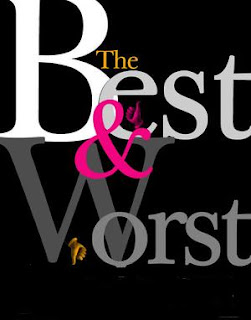 Initially I didn’t want to create a best & worst list. Who am I to do this? But then I noticed that just about all the other blogs did it….so…. here’s my take. (yeah, I know, if everyone jumped off a cliff…)

Disclaimer: I have not smelled every single new perfume launched in 2008. Also, there are many new launches that I have smelled that are not on these lists because they are neither the best nor the worst.

Lists are in alphabetical order

Calvin Klein Secret Obsession: This is good stuff. Remember, it’s CK, it’s not going to contain black truffles or rain water blessed by monks, but it smells quite good.

Chanel Beige: At first I was indifferent; I expected something a bit more interesting or edgy. But Beige is simply lovely – it’s a beautiful freesia/honey scent that seems classic and timeless. Well done.

Ralph Lauren Notorious: Similar to CK Secret Obsession above, this is Ralph Lauren, there won’t be any meteorites or bark from a giant Redwood found growing in the Sahara desert in this juice, but nevertheless it smells quite good.

Estee Lauder Amber Ylang Ylang: this is EL’s Private Collection; it should smell like a high quality perfume. If it were solely unexciting that would be fine. But EL AYY smells like something from Bath & Body Works.

Tom Ford White Patchouli: What patchouli? Where are the white florals? This smells like an astringent.
Posted by Abigail at 1/02/2009 10:02:00 PM

OMG White Patchouli was the most hideous thing ever. All I could think of was this atrocious soap that I had once smelled in China - I think it was meant specifically for cleaning bathrooms. Bleh.

I haven't smelled the Ylang Ylang scent, but I don't trust any scent that features ylang ylang. Great ingredient, but should be used sparingly, you know?

How are you to make the list - a consumer like all of us.
Before being a blogger, are~´t we all consumers? we are all entitle to opinions :-)
I haven´t done my list because I had no time, so I am enjoying the list of my favorite perfume blogs.
happy 2009!

Eau Premiere is really, really well done. Am still coming around on Beige...it's not that I don't like it...just that it didn't move me, I guess. As for Love in Black, for some reason, it was only recently that I got all of the notes in there. Yes, edgy for Creed; though depth and lasting are still Creed-like in that LiB makes JCEllena creations seem rather screechy. ;)

Serge Noire was unimpressive at best when I smelled it, and certainly nasty on me. I still felt relatively "young" as a sniffer when it came out, though, and think I need to try it again. (But I'm not running out for an opportunity...)

Ginger??? Too bad that Tocca didn't work out...

ScentScelf - you know, I should have mentioned that Tocca Brigitte was another fragrance I had high hopes for this year. The other Tocca's are decent...I even like Tocca Touch. The description of Brigitte with ginger being the main focus sounded wonderful to me. I love the smell of ginger, and Jo Malone's Nutmeg Ginger is a great scent.
But Brigitte only smells of ginger for 5 minutes. This was so disappointing. If only the fragrance could have held onto the first 5 minutes throughout... **SIGH**

I've tried White Patchouli twice, and never smelled patch at all. Yet the other day, I picked up the tester bottle in passing and gave it a sniff - and there was the patchouli, front and centre!
I still don't like it though.

My big disappointment last year was Jasmin Noir. It really sounded like 'me' - but though it was nice, it lasted all of five minutes on my skin.

Lasting 'all of 5 minutes' is the ultimate deal-breaker. The fragrance that lasts 4 minutes on me that makes me so sad is The Different Company Osmanthus. It's a beautiful 4 minutes, but no can do for that price.

oh dear, that's a pity. Yes, it's just not worth the money unless it lasts better than that.
I'm wearing Marc Jacobs Pear splash today - and it lasts several hours! Which is nice, but on the other hand, the bottle is huuuuge and I'm never going to use it up at this rate... ;-)