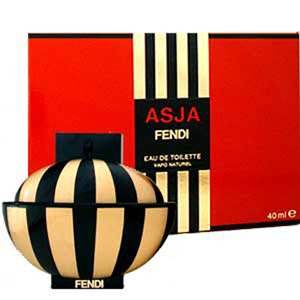 Asja seems like an answer to a question Opium and Cinnabar started formulating over fifteen years after their arrival, a question they probably never intended to ask. How do you extend their balsamic depth, as intricately detailed as the panoramic relief on a red lacquered chinoiserie cabinet, into the contemporary imagination without sinking it under the weight of its own opulence? It's as if someone took her great-grandmother's heirloom in to be appraised, discovering that what had been obscured under years of grime, seeming to be featureless, is actually a gorgeous, infinitely complex piece of art. Sit it in the corner and it fades into the shadows. Clean it up a little and it makes the corner seem more like the center of the room.

Asja remains true to the picture of the Orient painted by Opium and Cinnabar, right down to the packaging (in this case, a bottle which is part miso bowl, part Pee Wee Big Top) and in fact can be said to pay respectful homage to their basic construction, with a nod thrown in toward the damascenone succulence of Chanel's Coco. The similarities are there, and anyone familiar with all four might immediately think of one or the other when smelling this 1992 creation by Jean Guichard. Yet Asja turns a light on, illuminating an overly familiar structure, so ubiquitous as to seem dimensionless, in such a way that its depth is shown with singular clarity.

It isn't exactly that Guichard simplified here; rather, that he wasn't afraid of white space, and created unusual juxtapositions with infinitely arresting results. Like Opium and Cinnabar, Asja smells of cinammon and other spices. Asja lacks the sharp, peppery carnation they employ to such heightened effect, and yet you might swear it's there. It feels more transparent, nearly sheer, without losing Opium's and Cinnabar's sense of rich, rococco embellishment. Asja has a bouyancy which is simultaneously boozy, a fruity aspect which stops just short of overripe, if not fermented. Its smokiness and a sweet and salty duality put it right in line with many of the perfumes produced by Serge Lutens, though I can't think of too many I prefer to it for this kind of result.

Opium and Cinnabar have fruity elements as well; chiefly, orange. Asja is distinguished by its honeyed raspberry accord, which somehow manages to evoke carnation in much the same way rose-less Nahema conjures rose. The raspberry recalls a familiar structure by playing an entirely new tune. Put another way, it strikes a familiar cord without sounding like a broken record. Asja is the first Jean Guichard perfume in which I can see a direct link to the work his offspring, Aurelien, has been doing, particularly the reformulation of Piguet's Visa and Baghari and Bond No. 9's Chinatown. Aurelien, too, seems particularly suited to this kind of bas relief, contrasting a well-known, even overly familiar structure with an exceptionally simple conceit: the nectarous piquancy of Visa, canted in novel directions by the addition of immortelle, collapses chypre depth without rendering the whole thing shallow. Chinatown uses peach in a way which seems similar to Asja's raspberry, resulting in a salty, almost peppery territory neither fruit would have reached on its own. Baghari employs equally subtle, no less radical maneuvers to the classic aldehyde, creating what seems like a fizzy, sparkling background against which grannies jasmine and rose seem more energetic.

Asja isn't just an interesting sidebar to Opium and Cinnabar and the school of spicy orientals they represent. It updates them in ways which are both respectful and irreverent, and deserves to be seen not just in relation to them but as a wonderful perfume, an exceptional fragrance, in its own right.

You sure did make me wish I had started the day with your post...but I ran to my recently acquired Asja sample anyway, to give it a chance to start developing (on my second go-round with it) while I responded to your post.

I think you've captured it wonderfully. My first run with it felt very fruity to me, and that may have been partially due to the newness of fruit heavy scent to my nose, and partially just because. Today, I recognize more of the "oriental" apects...but still, it does seem to weave back and forth between fruit compote and oriental-ness, rather than simply be woven together. (No value judgements there; just an observation.)

You're absolutely right...masculine potential is high...will take the opportunity to try it on spouse ASAP. :)