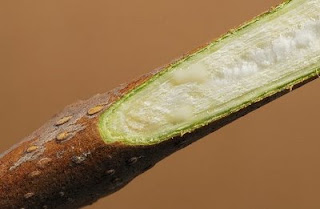 After smelling all manner of wonderful, exotic things in Italy, I returned home to find my bottle of Calvin Klein Man. It was sitting there on my desk, where I'd left it. The smell transported me back, twenty days ago, to the frantic state of mind I was in as I struggled to tie up last minute loose ends in preparation for such a lengthy time away. I bought CK Man several days before my departure. It's only now, coming back to it, that I realize how far it went toward calming me, however crazed I felt at the time. What is it about the work of Jacques Cavallier, the nose behind CK Man and so many other fragrances I love, that appeals to me?

Chandler Burr on Cavallier: "...a prolific perfumer so successful these days that he often seems to generate a quarter of each year’s worldwide fragrance product." Interestingly, in a recent review of Cavallier's latest Stella flanker, Sheer Stella, Burr accused its creative team of crass commercialism and lowest common denominator aromachemicals. Cavallier responded in print, correcting Burr's facts if not his opinion. The ingredients of Sheer are the same as those in the original; simply modified into different proportions. This bit of careless inaccuracy must have irked Cavallier to no end, given how often his perfumes have been judged more emotionally (i.e. irrationally) than factually.

Cavallier, self admittedly strong-willed, has built a reputation, in part, on a small body of cult favorites, fragrances difficult to classify, sometimes impossible to market. Some have been discontinued. All are interesting, whether success or failure by commercial standards. That isn't to say Cavallier doesn't create marketable fragrances. Some of his creations, like Issey Miyake L’Eau d’Issey, have been genre-defining hits. But for every hit there are one or two "misses". The interesting thing about those so-called misses is how influential they are in their own way. Far from missing their targeted audiences, these ricochet off into different precincts of the industry, creating new trends, planting the seeds for new audiences through alternate combinations, forging innovative paths which other perfumers then follow. It's a different kind of success.

M7, for Yves Saint Laurent, is no longer available in the U.S., but it presages the craze for all things aoud in masculines and feminines alike. M7 probably helped make the Montale line possible. It certainly influenced the recent reinterpretation of Habit Rouge, the edp concentration of which replaced powdery carnation and amber with agarwood. The inclusion of rosemary in the M7 mix typically goes unremarked, yet it adds a trademark touch of the herbal dissonance to the composition in a way which relates M7 to everything from Ultraviolet for Paco Rabanne to the above mentioned CK Man in Cavallier's oeuvre.

The herbal bent of Cavallier's compositions often has, as with CK Man, a lactonic quality, giving it a richness and an opacity unique to perfumery. Le Feu D'Issey (discontinued and difficult to find) and L'eau Bleu D'Issey both explore this territory, resembling the milky viscosity you get when you break open certain twigs and plants. Feu is less openly herbal, applying the effect to citrus notes. Bleu is unabashedly green and aromatic, and in addition to the herbal tones it features another Cavallier trademark, an odd little bread note. That bread note reappears in different combinations throughout his output, creating alternate takes on what is already a unique accord.

The apotheosis of this bread note appears in YSL Elle, which Cavallier recently co-created with frequent collaborator Olivier Cresp. The two have also worked together on Midnight Poison, Cacharel Amor Pour Homme Tentation, Diesel Fuel for Life Unlimited, Lancome Magnifique, Nina Ricci "Nina", and Paco Rabanne Pour Elle. Aside from Cresp, Cavallier's most frequent collaborator has been Alberto Morillas. His creations with Cresp have been less overtly odd. His work with Morillas, his "brother in creation", seems to have trickled off around 2003. A more recent collaboration with Annick Menardo proved one of the more interesting fusions of technique in contemporary perfumery. Who knew that the sensibilities of the two would compliment each other so well? For Diesel Fuel for Life Women, he matched her creamy vanillic-floral contribution with herbs and that signature bread note, creating a unique take on the trend for fruity florals. Fuel for Life Men presented a modern fougere, part fruity, part fern.

His most iconic fragrances, aside from L'eau d'Issey, have been Acqu di Gio for men, Jean Paul Gaultier Classique, Bulgari Eau Parfumee au The Blanc, Essenza di Zegna, Armani Mania, Stella McCartney, and Lancome Poeme. My own personal favorites have typically been YSL fragrances created under partnership with Tom Ford: Cinema, M7, the fantastic Nu (again, slightly ahead of the craze for incense fragrances), and Rive Gauche Pour Homme. His work with Ford continued after Ford's tenure at YSL ended. Since then he has done two Private Blends under the Tom Ford brand name: Tuscan Leather and the sublime Noir de Noir, both with Harry Fremont, who was also his collaborator on CK Man. I appreciate Calvin Klein Truth and Boucheron Initial (a wonderful use of immortelle) without feeling too passionately about either.

Weirdly, my favorites aren't necessarily those I wear most often. I can't remember the last time I sprayed on Nu, let alone M7. So it's no surprise that the first Cavallier fragrance I bought and loved is the one I wear the least frequently. Kingdom is unusual even for Cavallier, in that I find it difficult to relate to the rest of his work, apart from its general audacity. No other Cavallier fragrance divides as neatly down the line between love and hate. Some smell body odor. I smell jasmine, rose, and cumin. The first proposal for Alexander McQueen's first fragrance was what eventually became Secretions Magnifiques for Etat Libre D'Orange. Comparing Secretions to Kingdom shows how tame Kingdom really is. Whereas Secretions is assaultive and difficult to impossible (I like it, mind you), Kingdom integrates its oddness in a way which makes that dividing line not only possible but emphatic. Secretions is alarming and off-putting, no matter how much you appreciate it. Kingdom carries the big stick but walks softly with it.

Cavallier was born in 1962. His birthplace, big surprise, was Grasse. His family has been there since the 15th Century. Both his father and grandfather were perfumers. As a child, he studied raw materials with his father from 5 to 7 a.m. He joined several companies before Firmenich, with whom he's now employed.

Really interesting to find a post on a perfumer about whom I'm not very educated, so thanks very much! I'm intrigued by the bread note that you find laces many of Cavallier's creations. I vaguely remember that breadiness in Le Feu d'Issey (why didn't I buy a dozen bottles back then, dammit?) and really liking it. Will have to re-sniff the quickly dismissed YSL Elle.

Brian,
that was fascinating - thank you!
I had heard the name, but didn't know anything about him. Certainly not that he was responsible for so many perfumes.

I used to love L'eau d'Issey, back in the day, but it's years since I've reached for it. Maybe I'll wear it tomorrow, in Cavallier's honour!

Incidentally, I agree about Calvin Klein Truth. I own it, but have no idea why I bought it. Though it's pleasant, it's sort of 'meh' on me. But I do like the limited edition 'notes' collection that came out with it - do you have those? They are fun to play with.
Also, with Kingdom, I'm one of those who gets the lightly-curried rose rather than BO. I like it quite a lot, though I've never bought it. Perhaps I need to sniff Secretions Mangnifique.

Son of a gun...Cavllier did JPG Classique? I've got a thread of under-the-radar favorites running through this author list, which I wouldn't generally cluster together in a Venn diagram: Nu. Poeme. Classique. Au Te Blanc. Cinema.

Always interesting to read your musings.