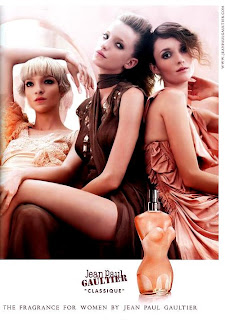 1. I've discovered that I really like fragrances I'm discouraged from even sniffing by reputable sources. Michael by Michael Kors smells like roasted gardenia and tuberose to me, spiced a little, and that's a good thing. It dries down in a wonderful way, lasting just about all day and then some. Boucheron Trouble doesn't smell too sweet or pedestrian to me. It smells rich and slightly woody. Kelly Caleche isn't a bore or even a letdown. It makes a pretty definite statement to me, with its vegetal iris and peppered disposition. Jean Paul Gaultier is supposed to be headache in a bottle, whereas for me, it has restorative properties.

2. What is a dandy fragrance? I used to think it was a rose a guy could get away with wearing. Now I realize that the fragrances which get called dandy-worthy are typically anything the guy in question likes but which is popularly regarded as feminine and therefore requires some justification or mental adjustment to wear. In this respect, every perfume I own which is meant for women (and I have a lot) is a dandy fragrance. I don't think wearing a so-called feminine requires justification. It's an act of social sabotage, which is justification enough. You make it your own, and if you stop worrying over it, and wear it with confidence, people stop judging it separately from you as being either appropriate or inappropriate. You own it. What could be more appropriate? The other day a homeboy came in to smell the Bond No. 9 fragrances while I was standing there. He had on Louis Vuitton sneakers, chunky gold jewelry, and was more put together than most of the women I know, and he was worried that the No. 9's he favored were considered feminine. He looked to the women behind the counter, who all liked different No. 9's, to tell him whether or not he should be caught dead in his favorites. Enough said?

3. I'm not sure what I think about the alleged masterpiece Beyond Paradise. There, I said it. Sometimes I think I love it. Is that a figgy sort of green in there, or just a gardenia and jasmine sucker punch? Wearing it today, I'm drunk on it. Smelling it a month ago I thought the naff lollipop bottle suited it perfectly.

4. I love Givenchy Insense. It seems harder and harder to find the older bottles. Online they're always "out of stock". I found some at a local discount store and purchased, even though I had a small bottle at home already. Before I ever smelled it I was told that Insense is a male floral. I disregarded the fact that it smelled anything but floral to me. Maybe if I focus I can smell the magnolia and the muguet, but I would never call this girly or even anything less than robustly masculine. More bewildering still, Michael Edwards classifies this as woody - floral musk. What am I missing? Top to bottom, I get that mentholated green note, part galbanum, part eucalyptus. It's almost as butch as Estee Lauder Alliage. I'm told this is the lentisk (aka mastic tree), a small evergreen shrub of the mediterranean region. And yes, the part waxy, part oily qualities of muguet and magnolia suit it well. But, really--musk?

5. What's going on at Sephora? Granted, their stock was always pathetic, but at one time, just under a year ago, they carried Cartier, Hermes, and any number of items I haven't seen on their shelves for months now. We're getting new stuff in, they told me, when I asked why they were rearranging their shelves and things started to go missing. They were just making room, they said. Now the masculines and feminines, once on opposite sides of the room, are on the same wall, and both have been laughably condensed. No more Jardins de This or That. No more Baiser du Dragon or So Pretty. But if you're in the market for Fresh Sake or Burberry Bland, this is the place to go. I used to dislike Sephora. Now I know I hate them.

6. When I first smelled Santa Maria Novella Nostalgia I thought, yes, it does smell a little like Bulgari Black. Then I got home with the bottle and actually conducted a side by side comparison. Nostalgia is nothing like Black. And it blows it out of the water, as far as I'm concerned. I've also since come to realize that Nostalgia lasts with impressive tenacity. In less than two weeks I went from liking and admiring this fragrance to loving it all out of reason. On sale: One slightly used bottle of Bulgari Black. Make an offer.
Posted by Brian at 6/30/2009 11:13:00 AM

Yeh Love Insense too ,only from a sample I had to get from Holland I'm in uk
do get the florals though after the mint ,I noticed similarity to Eau de Givenchy?
It,s reasonably easy to find on uk ebay
Loveto be in draw
Jo

If it smells nothing like Black, then why get rid of the Black?

I love black; the smell of latex and talc. I'm never sure if I actually want to wear it, though.

Please enter me in the drawing; I've been stumped at how you both review fragrances I don't know, for the most part, and I have hundreds of samples! It's incredible how much scent is out there (and of course I want to try EVERYTHING)!

well, Julie, I jest (I...guess). I do appreciate Black, and the more I smell Nostalgia the more I like it too, and see no similarities really, or less and less. I wouldn't get rid of Black, I don't think, though I believe I've worn it all of two times. Nostalgia I wear a lot and bring out to sniff even more. It has none of Black's social graces or subtle complexity.

I didn't notice similarities between Insense and eau de Givenchy, Jo, though I haven't really spent much time with Eau. I think that mint quality comes from the mastic, which I originally believed to be galbanum. The florals are sort of lost on me, unless I imagine flowers with a bit of a menthol-like tone to them, like muguet can have (for me, anyway). I also might be crazy and smell all sorts of things which aren't there. I don't always trust my nose.