Bond No.9 Saks Fifth Avenue for Her 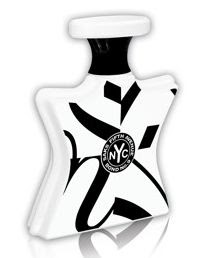 Michel Almairac has done some pretty high profile fragrances, some of which even the newest or most casual admirer of perfume will find familiar; Gucci Rush, Gucci Pour Homme, Chopard Casmir, and Dunhill Men among them. He's also done a lot of niche work, like Voleur de Roses for L'Artisan and Le Labo Ambrette 9, and lower profile mainstream compositions like Gres Cabaret, Joop Homme, and Paloma Picasso Minotaure for men. Though he has been productive since at least 1982, his name is hardly as well known as contemporary peers Sophia Grojsman (Poison, Yvresse, White Linen), Jean Claude Ellena (Hermes) and Maurice Roucel (Missoni, Be Delicious, Tocade). Even among perfumistas, he's hardly a household name.

Almairac has done five fragrances for Bond No. 9, several of which I like very much. Fire Island has its detractors, but I'm a fan. It smells like suntan lotion, but it's a fantasy version, conjuring the beach and summer memories and a laid back state of mind. It starts out strong with gardenia and seques eventually into white musk and soft patchouli, a progession which mimics the real sense of a day in the sand, where you start out fresh and clean and end up salty, slightly grungy, and warm. Bryant Park is pleasant enough. West Side, too. Recently, I smelled Saks Fifth Avenue for Her, a fairly straightforward tuberose, and I think I like it most of all.

Sold exclusively at Saks, it has an unusual quality for a tuberose. It has that buttery, rubbery quality many of them do, but something else too. This might be the vetiver at its base. It might be all kinds of things. What it smells like is somewhat smoky. Almairac delivers this unexpected trick in a few other places. The incense singe of Gucci Pour Homme comes most readily to mind. Along with vetiver and tuberose, the notes include vanilla, jasmine and gardenia. Pretty simple. The effect is deceptively simple, too. What I like about Saks is how quietly strange it is. It reminds me of Fracas with an ever so slight gourmand edge to it. I think that's what makes it for me. It's as if someone figured out a way to grill Tuberose and serve it up as an appetizing dish, making tuberose seem as edible as artichoke or coconut. Coconut is a good analogy, as many people swear there's some in Saks. They find Saks somewhat tropical. I guess I really don't. Then again, it makes perfect sense to me that the man behind Saks and Rush is the man behind Fire Island, because all do interesting things with tuberose and/or gardenia. Like many tuberose fragrances, Saks last well, but it doesn't seem as "take no prisoners" as some can, and I'm someone who likes the assaultive quality of Michael by Michael Kors. Whether or not you find its qualities worth the price tag is another question, and always or often an issue with the Bond line.
Posted by Brian at 8/16/2009 01:06:00 PM

thanks for the review, brian.
i liked this one, too. for some reason, it reminded me of something etat libre d'orange would do with tuberose. i'm hit and miss with the tuberose (can't enjoy fracas & find Michael Kors to be a guilty pleasure) but Saks feels like it has an inside joke to it.

Which is probably more a reflection of me, since I'm sure Saks didn't pay to have a strange wink of a perfume made for it. maybe i'm looking for an inside joke wherever i can.

Great review. I LOVE this one! It's my only full bottle purchase (on the Bay of course) from Bond so far. To my nose, it's tropical/coconut/tuberuose butter...absolutely wonderful!

Interesting, Dea. Never thought of it that way, but you might have something there. I actually love tuberose for the most part. There are very subtle differences between tuberose fragrances it seems but I sort of like that. Superficially, there isn't much difference between Fracas and Saks. So the distinctions are more mercurial, and that's probably more intriguing to me? I can see this being an Etat fragrance. At the same time, it smells very much like a bond thing to me, with that underlying musk thing they do. It does seem a little wackier than some of their other stuff. Something about it smells a little off--maybe that burnt note.

Amanda I thought it wasn't tropical at first, then smelled it later and thought, yes it is, then no it isn't, then yes it is. It smells totally different than when I first sprayed it in the store. Then again, I had some Tocade on my hand. I've yet to layer them.