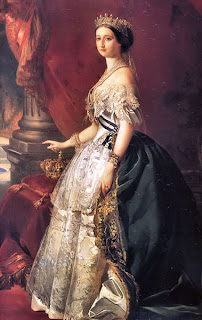 The original formula for Jasmin Imperatrice Eugenie (JIE) was created in 1862 for Empress Eugenie of France. I find this fascinating. When I’m wearing JIE I smell similar to Empress Eugenie over 147 years ago. What an odd feeling this is – to smell like, well, history. You might wonder if JIE smells dated and old fashioned, considering it’s age. Maybe a little, but all things considered, there’s a reason why it’s a classic and still around today, it’s quite excellent.

The monarchy dissolved after the reign of Napoleon III so Eugenie was the last empress of France. She is noted for her beauty and elegance and was quite a fashion icon during her time. This seems so trivial to me, that Empress Eugenie was a fashion icon. Surely she could have accomplished something more noble, but alas, perhaps it was not permissible for a woman to do much more than be a beautifully dressed thing in the 19th century.

Jasmin Imperatrice Eugenie is a decadent sillage monster with potency to spare. I love that about it. I’m not particularly fond of jasmine so it took me many years to get around to trying JIE. Once I did I found that the fragrance is not so much about jasmine at all, but instead a classic oriental with a divine ambergris and sandalwood base. JIE begins with the a powerful triumvirate of bergamot, jasmine and rose. The first 15 minutes or so might seem suffocating, like you’ve entered a dark wood paneled room from the 19th century whose windows and doors have been shut for years and the air is thick with the aroma of heavy dusty drapery.

After the initial overwhelming entrance, JIE becomes much more accomodating to the modern nose, albeit taking it’s time in doing so. You must remember that JIE was created in a time before the automobile, when plumbing was a luxury for only the wealthy and electricity was a figment of the imagination. So please bear with JIE, she’s from a different time and place, she’s ostentatious and regal and she’s and well worth your time.

The most pleasant surprise for me is that JIE is actually a sublime sandalwood and ambergris fragrance with jasmine used only as a garnish. This is the most beautiful rendition of creamy sandalwood and ambergris that I’ve ever smelled. There is also a hefty dollop of vanilla in the base – giving JIE an almost gourmand quality. For comparison sake, there’s some similarity between JIE and Chanel’s Bois de Iles, however, BdI is stark, minimalist and barebones compared with the opulence of JIE.

At a time when Guerlain’s upcoming launch includes the note “marshmallow harmony” and every tacky celebrity is slapping her name on a perfume bottle, Creed’s Jasmin Imperatrice Eugenie seems most welcome. Just don’t overdo it, JIE is beautiful when applied with a light hand, suffocating when overapplied. I can’t underscore how important it is not to overapply JIE. Two discrete sprays are plenty.
Posted by Abigail at 8/26/2009 10:10:00 AM

I wanted to like this perfume, but, in the end it was too medicinal for me. Smelled like sandalwood infused with band-aids.
Glad you liked it though, and I know many others that share your enthusiasm.

I will have to try this for sure - I adore Josephine by Rance, another vintage formula, and a big part of that is the fabulous Bourbon vanilla, sandalwood & ambergris in the base, I can't get enough of it.