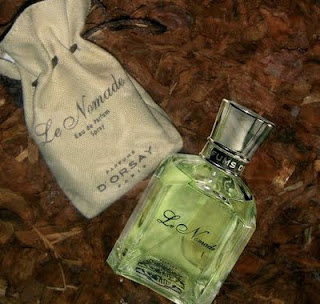 Le Nomade starts off with a tart, sparkling lime note, making the fragrance seem almost dewy at first. I wish it lingered there longer because it's a unique note, but it's a pretty fantastic openings. After this, it moves along into woodier, spicier terrain, but it never really loses that tart disposition altogether. Some have compared it to Cartier Declaration, and while it's true they feel related, there are enough differences between them to warrant individual attention. Declaration is nuttier somehow. Le Nomade feels a little more floral, recalling the jasmine beatitude of Third Man, if perverted by the spice rack.

I liked Le Nomade instantly. It smells better than the majority of masculines I come across, and, like Third Man, has something about it which makes it feel a little more unisex, partly the jasmine, but also something else. It doesn't take much to veer away from "masculine", when you consider how homogeneous your average masculine fragrance is. Many of the D'Orsay fragrances date to the early 1900s. Le Nomade is practically a baby, at a little less than ten years old. It smells much older, and not just because it bears very little relation to contemporary trends in mainstream perfumery.

The D'Orsay website features the fragrance as part of its "Intense" series and lists the notes as follows: ivy green, cedar leaves, bergamot, lime, jasmine, geranium, cardamom, coriander, cumin, black pepper, vetiver, atlas cedar, sandalwood, balsam fir, sage, and liatrix. The easy way out would be to describe Le Nomade as a woody vetiver, citing the cedar, the sandalwood, fir, sage, etc. But the spices, the jasmine, and the geranium take the composition to an entirely different place. I've heard people describe this as a confused fragrance. D'Orsay doesn't help dissuade from that impression. "Where cultures collide," the website boasts, continuing:"the perfect blend of essences from Asian and African civilizations." Then again, that makes sense to me, as the overall result smells like a fusion of a spicy dish and a steaming porcelain cup of jasmine tea, side of lemongrass. Le Nomade is that rare thing, an eau de parfum masculine.
Posted by Brian at 8/17/2009 02:37:00 PM

I have this one, and I rather like it, masculine or not. ;-) I agree that it smells older than ten years - it seems classic in some way. The only drawback for me is that it is shortlived on my skin.

Brian,
I experimented, and layered Le Nomade with my sample of Patch 24. Interesting!
I thought the smoke would eat poor Nomade alive - it did seem to, at first. But later, it was all smooth and warm and rather nice. Nomade and smoke is a good combo. It also lasted a lot longer on my skin than either one alone. I can still detect it on my wrist, several hours later.