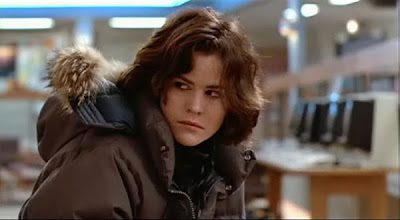 The Breakfast Club was so ingrained in my teenage consciousness that I think my generation should be called Generation Hughes instead of Gen X.

I was 14 years old when The Breakfast Club was released. I must have seen the film five times that year; way back in 1985 (2010 is the 25th anniversary, yikes!). The Breakfast Club is essentially about high school stereotypes and teenage angst. I personally didn’t fit into any of the tidy stereotypes John Hughes chose to represent in the film, but I strongly felt little bits of myself in all the characters, every single one. And the most defining feature of The Breakfast Club is that all these kids, from every stereotype, all feel similarly frustrated, trapped, sad, scared and nervous about themselves, who they are and who they will become as they grow up. I like to think John Hughes did my generation a favor by creating films about teenagers; he gave us a voice and he gifted us with entertainment that helped us understand ourselves in a way that had never before been represented on the big screen.

Now, I highly recommend that you get in the mood for my character, Allison Reynolds, and salute 1985 by listening to this:


My name is Allison Reynolds. Yeah, I’m the kook, the social outcast, the freak, the character billed as the basket case. If you don’t think these labels hurt my feelings, well, they do. But you know what? I'm not really any of these things. I'm just different, pure and simple, and if that makes me a basket case, well, that's your stupid problem. If you can't see that a person might not want to be Miss Popular, then you are short sighted, my friend. You asked me here today to talk about how I feel about my life, or lack thereof, since I have no friends and no home life to speak of. And you also asked me here to find out what perfume I wear. Now that’s just crazy. Who the hell cares what perfume I wear, if I wear any at all? I'll tell you the truth, sometimes I spray skunk juice on myself because I love that smell.

Yesterday I went to Saturday detention. I didn’t even do anything to get in trouble. I just wanted out of the house really bad. I thought telling my parents I was in trouble and had Saturday detention might give them something to yell at me about, a reason to pay attention to me, for just a little while. Well, it didn’t. My Dad just mentioned that it might make him late for his flight, but he volunteered to drop me off. My Mom said thank goodness they’re sending me to a shrink, ‘cause I need all the help I can get. Yeah, whatever, Mom.

I packed my own lunch for detention. Always do. Mom would never think of doing that. I usually go to detention once or twice a year, something to do on a Saturday besides stare at the walls of my bedroom and wait for the minutes to string together until I graduate and get the fuck out of this town. I told my shrink and he thinks its fine; detention allows me some ‘social interaction’ like I’m a dog, going to the dog park, to meet other dogs.

This Saturday we had a really mixed up group. All the kids there were total opposites, or so we thought, at the beginning of the day. We had the Princess, the Jock, the Brainy Nerd, the Burn-Out and me, the freak with no friends. Principal Vernon didn’t even realize I wasn’t supposed to be there. He doesn’t even know my name. None of the kids there yesterday knew my name. They just think I’m weird is all.

Turns out that all the other kids think they have problems, too. I couldn’t imagine how the Princess and the Brainy Nerd could have a dark side, but they seem to think they do. Now, John Bender, the Burn-Out troublemaker, I can see how he might be like me. Instead of being quiet, he just acts out all the time, putting a big spotlight on himself; he’s kind of exactly like me but the opposite. The Jock, Andrew, turns out to feel really pressured by his Dad, like the only time he’s worth anything is when he’s good at sports. Brian, the Brainiac, also feels the same way, like his parents only care about straight A’s, and don’t know there’s a person inside him. Claire, the Princess, doesn’t really seem to have any problems to me, but she says she does, she says she feels pressured to be mean and do what all her popular friends think is acceptable. I wouldn’t know what that’s like since I don’t have any friends. I do know that I wouldn't stay friends with people who are fake, and only pretend to like each other to stay popular. That's just so shallow, and I'm more than that. Status quo is not important to me, I'm fine by myself if this is the way it has to be. But I just don’t know. Anything is possible. I’m getting tired of being alone and always looking at the other kids from the outside, from the sidelines, as a nobody, a loser, an invisible girl. So, it’s embarrassing to admit, and I’m using some of the self “introspection tools” that my shrink is teaching me to use, I can see now that I do things to gain attention, I compulsively lie and I steal things and I try to act shocking so others will pay attention to me.

Shoplifting is how I came upon the perfume I’ve been wearing the past few months. I was at the drugstore and they had these gift sets of various types of perfumes with matching body lotion. I picked Jontue by Revlon. I had seen the ads in Seventeen magazine and commercials on TV and I liked the way the ads made me feel like I could get away, on horseback and be free. Free, happy and wonderful, just being me! I could be myself yet somehow sensual and still innocent. So I stuffed that gift set into my back pack and left the drugstore. Sometimes I sneak a little Opium from my Mom’s cabinet or even her Shalimar, but Jontue is my little secret and I’ve already used up the body lotion. I need to go back and steal some more soon.

Here's the commercial for Jontue. I know it's corny but it makes me feel like someday I'll escape my parent's house, I'll escape high school and I'll be someplace far away, free, successful and happy, just being me:Anyway, yesterday in detention was kind of fun. We all sorta bonded. Claire gave me a makeover, and even though I felt so stupid, it made Andrew, the Jock, notice me. He suddenly thought I was pretty and he even kissed me when we were leaving at the end of detention. I thought my heart would explode right out of my chest. I really did. I’m still all tingly and excited. I've never kissed a boy before, even though I sometimes tell people I'm a nymphomaniac. (Oh, and since you're so unusually interested in perfume, I can tell you what Andrew was wearing, it was definitely Polo by Ralph Lauren, all the jocks wear that stuff.) Anyway, back to the nympho stuff, I tell people crazy crap all the time, just made-up shit, to get a rise out of them. People are so stupid, especially in small towns like mine. Everyone is so concerned about being cool, accepted and the same as everyone else. I’m a little nervous that in school on Monday Andrew won’t talk to me, he’ll pretend not to know me. But that doesn't really matter. I'll be fine either way. I’m sure Claire won’t talk to me, pretty positive of that, but only time will tell. It was good to find out that the other kids sorta feel the same as me, ‘cause they all have issues too. I thought I was the only one with problems, well, and John Bender, too, because he’s just a big explosive time bomb of issues. But yesterday I suddenly realized I wasn’t alone, that other kids were just like me on the inside.

People tell me that college is entirely different, that there aren’t the same cliques and the other kids are more accepting and almost everyone finds their own niche. At least this is what my shrink tells me. I want to go to art school. I'm going to be huge, do something really amazing once I blow out of this stupid town. No one knows this yet, because I keep all my work hidden, but I’m a really talented artist. I draw all the time and I’m getting better and better. I also like to write. Writing comes so easy for me, maybe it's because I'm always observing others, from the side lines, I have so many stories to tell. I haven’t told my parents yet, about art school, but they won’t care anyway, they'll just send me wherever I want to go.

This is fun! I'm sure you and Brian are enjoying these. I certainly am.

Jontue's a lovely choice for Allison - she has this secret girly side she's not comfortable showing, but it's important to her. I like to think that, after that Saturday, she sometimes tosses the girly look into her rebellious repertoire, if only to disconcert people. It's a look she'd probably choose, if being ignored wasn't so painful to her.

What blew me away when I watched these again, aside from how YOUNG they all were (gasp, sigh, etc) was how good they were in these performances. I was especially impressed with Ally Sheedy. It would be such a hard character to play without making it into a caricature. And she managed to do it so well.

I smelled Jontue again recently. And Wind Song. And I can understand why, at a certain age, I bought them for every woman in my family at Christmas time.