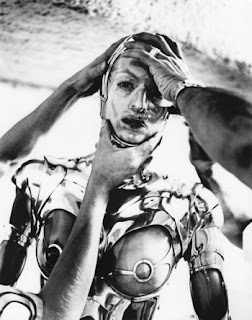 Hearing and reading about Womanity is one thing. Smelling it inevitably begs the age-old question: "What's in a name?"

As has been pointed out recently on this site, I'm geographically marginalized (not New York, not Paris, not Milan; just plain old, garden variety, nothing special, no big deal middle America) so it wasn't until a few weeks ago that the fragrance showed up locally and I could get my hands on it. Had I known how much I'd like it, I might have been a lot more anxious than I was. Beforehand, waiting anxiously for something called Womanity seemed like something a fat-faced character in a Sunday comic might do, with cartoon steam coming out his ears and a burned out light bulb over his head.

Much has been made of Mugler's branding strategy for Womanity--the website, the ads, the attempts at grassroots buzz on a corporate-sized budget. I won't rehash any of that, but I do think it's interesting that a fragrance so downright masculine, if not simply quintessentially unisex, would be marketed this way, with such a relentlessly specific focus. Fine, maybe Womanity's tangy start is a hard sell as a greasy mechanic's after shave. I wouldn't go that far. But the idea Mugler is advancing with the fragrance seems quaintly outdated in a culture where emphatic gender distinctions are increasingly, even routinely, blurred, and Womanity, after all, is hardly your average fruity floral. Besides which, mechanics and truck drivers, much maligned in reviews of Kouros and its ilk, have much better taste than they're typically given credit for.

Womanity is salty, yes. You might have heard that. Some woody facets, although finer points like facets aren't exactly useful concepts in a Mugler fragrance. It has a fig thing happening. I'd heard it was quiet, if not exactly sheer or a skin scent. I don't find that to be true at all, and my skin usually chews fragrance up and spits it out. Katie Puckrik, reviewing the fragrance on her site, gave me the first indication, prior to smelling for myself, that Womanity might have some presence; maybe even a lot. If memory serves, she also talked about its suitability as a unisex scent. I'd heard a lot about the salty sweet duality of the fragrance, but for the most part the things I read made Womanity sound fairly derivative, a sell-out gambit on the part of the Mugler brand for suburban mall ubiquity. I.E. Ho Hum, nothing special, etc.

Womanity is the furthest thing from average, and a far cry from faint. If this is a gambit for culture wide ubiquity, then someone might want to clean out the pipe the folks at Mugler are smoking. Somebody left some wacky tobacky residue in there. The stuff lasts forever, for one thing. I can smell it on me all day. Hands down, it is the closest to niche you will find, short of Angel, at the mall counter. Frankly, I find it more interesting, more audacious, playful, and satisfying than a great deal of so-called niche fragrances as well. It has personality and a sense of humor--and not entirely inadvertently. Yes, in terms of the packaging and sales pitch, the joke is on Mugler. All the same, have no doubt: Mugler is laughing WITH you, too. You need only look back to the fashions the man behind the name created in the nineties to see the intended irony involved.

I've made no secret of my love for Angel and Alien. It's logical to use those two as bookend barometers when judging Womanity on various levels--strength, oddity factor, persistence, diffusion. It's also a little misleading. For the most part, what Womanity shares with its sisters is a sensibility. Smelling these three on a crowded shelf, I might not link them together, but learning they're connected would make perfect, instant sense to me. They're definitely engaged in a conversation. Womanity is no Mitsouko, but neither is Angel, and I'm not sure either are too busy trying to be.

OMG it's the Borg Queen! (Well-known to us middle Americans.) That's what the name Womanity has reminded me of all this time, but I just couldn't remember...

A cousin I went to New Orleans with over the weekend wore Angel. You know, she smelled pretty good. I may have to reconsider that one -- Olfacta

I cannot wait to sample this one!

Olfacta, did you ever see the spread Helmut Newton did in Vanity Fair with the Mugler Borgs as sort of jekyll Hyde lab techs? I looked all over google and couldn't track them down. What does one search? cyborg mugler newton vanity? Hmmm...

Dusan, I've been hooked on everything Mugler since I first casually picked up Angel at the counter the year it came out and fell instantly into its thrall. Some minor keys since then, for sure--like, say, Angel Rose and some of the Innocent flankers. But lots to love, and lust, as well.

Bloodyfrida, when you do check it out I want to hear.

It's a difficult name to say . I havn't tried it yet as I am a sucker for old-fashioned bottles and "sniffed" at this one ( pardon the pun).

*points at Brian* Yeah - what he said.

Well, except that I like Womanity a lot, but can't handle Angel or Alien! :-)

As for that packaging, it doesn't make me think of Mugler so much as Mugatu from Zoolander...

The bottle is wacky, for sure. I prefer the transformers chic of Alien, I think, of all the Mugler bottles.

Mugatu!! Yes. Absolutely. The bigger bottles are nicest, with all the metal trimmings. Then too they're like some weird...sex device.

For months I thought, that's the most hideous thing I've ever seen. Then I realized that it was brilliant. I love everything about Womanity- the strange, confused advertising campaign, which looks like a breast-cancer awareness poster but with one model in a Mugler headdress, the website, the name, everything. I think it will go down as one of the most interesting marketing campaigns in perfume history, surely...I think most people just don't expect that there would be any kind of sense of humor involved in the marketing of perfume. The whole thing is clearly parody to some degree, especially considering how masculine the fragrance itself is. I love Mugler because there's been this sly humor to his fragrances from the beginning- I mean, calling the most deliberately vulgar mainstream perfume on the market ANGEL, giving it an overdose of patchouli and selling it to the exact type of woman that would probably say she hated patchouli- pretty good. I'm curious to see how well it's going to sell.