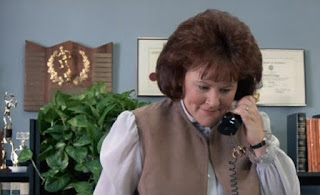 As part of our week long series on John Hughes and eighties perfume, our friend Jack was going to impersonate Duckie, from Pretty in Pink, today. Unfortunately, Jack got busy with school, so I am impersonating Jack, and instead of Duckie I'm portraying him as Grace, from Ferris Bueller's Day Off.

Ferris Bueller is my least favorite John Hughes movie. It has the manic flair of Sixteen Candles, but it misses the anchor of Molly Ringwald. It's the best thing Matthew Broderick's ever done, I think, and in a way I think he does flippant sarcasm better than Molly did in Candles, but he lacks her warmth, and despite a serious thematic thread involving his best friend's relationship with a bullying father, you don't really feel there's anything at stake. It's all lightness, with nothing much to ground you.

It does have its pleasures, and one of the most pleasurable pleasures for me is Edie McClurg. Most of the main Hughes players are hard to imagine wearing perfume, as Elisa Gabbert pointed out in her post yesterday. Ferris Bueller, his girlfriend, and his best buddy are the exceptions. It's easy to imagine them wearing the most popular fragrances of the time. And yet, I can't help it: Grace is the only one for me: 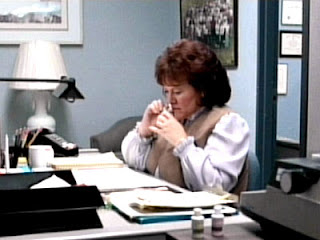 "I'm a happy person--okay? I'm just your average happy-go-lucky lady. I think on the bright side of things. But there are days at school where I think I could lose it--and how--and I might, if it weren't for the blessing of my chipper outlook. I guess you could say I'm pretty gay.

There's not even a window in my office. Can you believe that? That's how these school builders are. No window, and someone got a bright idea to paint the walls grey. A real light bulb went off over somebody's head and he thought, 'You know, it always seemed to me that the best color for a windowless room with a desk and a couple of dying houseplants would be the darkest, drabbest shade of slate, and somebody believed them, and now I'm stuck here all day like I'm pinned under a dark cloud without an umbrella. 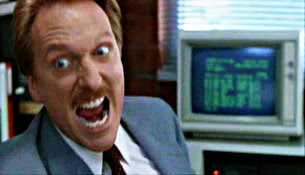 I stare at the grey wall ahead of me straight to lunch hour while Principal Jones shouts my name at the top of his lungs. 'Gr-a-a-a-a-a-a-a-a-a-ce,' he yells. 'G-r-r-r-r-ace!!' I run into his office as fast as I can and of course all he ever wants is to tell me the latest allegedly larcenous offense Ferris Bueller has committed. I come bursting in and he's sitting there red in the face, with steam shooting out his ears. He wants me to call the police, or Mr. and Mrs. Bueller. He wants me to send for Ferris at once. He wants me to jump up on the desk and scream, like him. I get a real workout running back and forth from his desk to mine.

I don't let it concern me. Okay? I'm going to tell you a little secret. I put ear plugs in. It helps me keep a smile on my face. And I have Jelly Rolls in my right hand drawer, so I keep my energy up.

Along with the Jelly Rolls I have a growing collection of perfume bottles. Confiscated contraband. The perfume problem has reached epidemic proportions here in our class rooms. The girls bring it with them from home. Every day there's a school shooting. Someone gets sprayed. And the amount these girls wear is a real nose sore. Mrs. Cabbits gets her migraines. The math teacher, new this year from Duluth, goes into coughing fits. He coughed so hard one morning he doubled up in seizures. He hit his head on the edge of the chalkboard and woke up in the dumpster. Those kids actually carried his body out like a bag of trash. It's the perfume. It clouds their judgment. It fills them with homicidal impulses. It's hard for a gay person like me to understand perversion like that.

We've asked the girls to stop bringing the perfume to school. We've alerted their parents. The problem is, their parents wear just as much as they do. That's where they pick up the habit. Principal Jones set up a security check at the front entrance. Everyday when they come in, they get patted down. First it was the girls. Now it's the boys. Polo and Giorgio and Drakkar Noir. Sometimes, principal Jones yells my name so loud and so all of the sudden that it startles me, and my leg hits the desk, and all the bottles rattle into each other. Those kids are sneaky. They've smuggled many a bottle past the checkpoint. This is where I come in. I set up a lookout post in the ladies bathroom, third stall down on the right.

I can read your mind, so I know what you're thinking. You're thinking, 'Golly gee, Grace, what do you do with all that perfume?'

Well, let me tell you, I certainly don't wear it.

I'm all for progress. When it looked like pet rocks were going the way of the slinky, I retired Engelbert to the herb garden. No dilly dallying from me. I might be gay but I'm no sap. Except for the occasional girdle, I'm not the slightest bit old fashioned. It's just that these perfumes, this stink they put out now, they're nothing I'd want anything to do with, unless I had a small feral creature to dispatch. Me, I favor the classics. I like something with the heaving bosom of history behind it. That's a fragrance I can get behind. Something generations of women have relied on, and generations of men have lost their heads over. Something classy. Shalimar. Now THAT, my friend, is a fragrance. 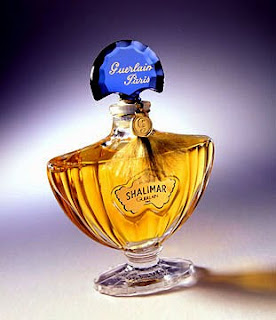 And since on a school secretary's income I can't afford Shamilar, I get Enjoli.

Which is just as good, mind you, as your Poison and your Polo and your Eau de Whoop-di-do. Whatever it is these kids are wearing. Some of these headaches act like they walked in off the family estate. Out in the suburbs. I guess they spray that stuff on and they think they're, what, of the manor born? They think they're really something. And they are. They're something else.

You've never smelled Poison? Oh please, there's only so much time in the day. I'll run out of jelly rolls. How does one describe it? How does one describe nerve gas? Tell you what. Why don't you just meet me out behind the cafeteria after lunch. I've got a bottle with your name on it. If you want to spray yourself into a coma, I'm not going to stop you, just don't go around telling people where you got it, and don't do yourself the damage on school property."
Posted by Brian at 12/17/2010 06:21:00 PM

Wonderful review , I didn't warm to the film . I am almost sure that Grace is played by the actress who also played a swinger in Eating Raoul and was most amusing .I have never tried Giorgio as it always sounded like the sort of name that rip off companies put on clothes to make them sound like Armani or Versace .

I've enjoyed all these posts so far (I thought Elisa's was fantastic!) and this one is no exception. Probably more so because it's the only film referenced so far I've seen (about a hundred times when I was a kid) and this character especially was one of my favourites. I think you captured her perfectly.

Oh wow what a great message ! One of my favorite teen movie of all :)
I can still hear the Principal Jones screaming "Bueller !!" with a menacing voice !
Shalimar i wear & love; I could easily imagine her romantically put this fragrance before going to bed...

Angela, she WAS in Eating Raoul! I just looked it up. How funny. It's amazing how steadily she's worked over the last three decades.

Our strict diet of John Hughes is almost over and I'm itching to talk about other things. It's been fun but , as you know, I'm not used to restricting what I say!

Oh, Grace, Grace... a little piece of perfect. "He's a righteous dude," is a familiar, oft-used quote at my house.

I LOVE Cameron, though - he's probably my favorite, favorite Hughes character ever. Which should tell you something about me, of course. (I don't think Cameron wears any scent, but he's fanatical about using his Old Spice deodorant stick. Frequently.)

Muse, maybe Cameron WOULD wear Old Spice, or even Brut? Sorry to hear about your grandmother, by the way. I know from what you blogged that it wasn't exactly a surprise but it's never an easy adjustment, even when you know it's coming.