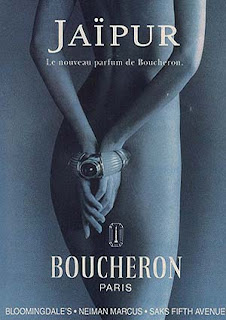 Boucheron Jaipur seems, to me, a perfect choice for the Holiday season, setting aside impressions inspired by the original ad for the fragrance, which is festive in an entirely different way. According to press materials, Jaipur "revives the mythical story of the Naurantan, a bracelet traditionally offered to young brides in Rajasthan for good fortune." I suppose one is luckiest, in some cultures, with one's hands tied behind one's back. And naked, of course. It often helps to be naked. The luck can adhere to you more easily that way. In some cultures, people get married naked. They live out their lives naked, in fact, because nothing is worse than to be fully clothed when luck comes calling. Many have been shit out of luck who were overdressed at inopportune times.

Jaipur was created by Sophia Grojsman, way back in the dark ages (1994), and as Dane over at Peredepierre says, it "plays the peach card." Fragrantica classifies it as "Floral Fruity". I wouldn't disagree, but would include a caveat. Since the mid-nineties, Floral Fruity has evolved (or devolved) into a pretty different beast than it once was. See any number of celebrity fragrances, starting with something, anything, by Britney Spears. These days, Floral Fruity is synonymous with sugary sweet, but it wasn't always that way, and Grojsman's instantly identifiable "milky peachy accord" (again, Dane) exemplifies the category's roots.

Many of Grojsman's perfumes feel lit from within. They hit the skin and it seems someone has switched a light on. There's a bright, happy glow to much of the work she did in the eighties and nineties, a quality which is simultaneously exuberant and adult. The closest I've seen a mass-market contemporary fragrance come to those special effects has been Gucci Flora, which didn't impress many people--and was, admittedly, a bit been there, done that--but was, for me, a welcome revisiting of a style Grojsman made famous. For me, in a way, Flora wasn't as much redundant as a tribute. The ad for Flora captured the euphoric feeling produced by smelling something as baroquely rich as Jaipur and seemed, with its sun-dappled field-of-flowers imagery, like some forgotten broadcast from the eighties. Do stick around for the jaded valley girl voice over at the close of the commercial; that's quite an evocative throwback, too.

Grojsman is one of my favorites, the nose behind an influential arsenal of iconic fragrances including Paris, Yvresse, Vanderbilt, Eternity, Spellbound, White Linen, Tresor, Bvlgari Pour Femme, and Calyx. Many of her lesser known fragrances are fantastic: Tentations, Celine Magic, Bill Blass Nude, Kashaya. Her body of work bottlenecks around the ten year period from the mid eighties to the mid nineties. Since then, she's done only several that I know of: S-Perfume's 100% Love and Outrageous!, for Frederic Malle.

I've smelled both, and like them--a lot--but, for me, Grojsman excels at making all-American department store fare. I say that with respect, because I think more than most perfumers Grojsman helped elevate the fragrance counter at the mall, bringing a uniquely heightened level of fantasy to the middle American consumer. Think how many of her fragrances can still be found in that competitive marketplace. You can still easily find Paris, Tresor, Eternity, Spellbound, White Linen, Calyx, Bvlgari. That's quite a streak.

Her forays into niche territory have felt a bit constricted to me, which is odd, given the budgets I imagine she was provided. They don't engage with the technicolor saturation of the mainstream fragrances on which she built her reputation, and I suspect she does her best work when her imagination must stretch to work within limits. All artists are limited, but I'm guessing the limits involved in a Malle fragrance and something for YSL are two different species of constraint.

Anyone familiar with Tresor and Yvresse will feel right at home with Jaipur. There are differences, and comparing these fragrances, which at first might seem slightly interchangeable, underscores their subtle distinctions. Yvresse is spicier than you realize; Tresor more oriental. Jaipur isn't at all spicy, really, but like many of Grojsman's scents it has a boozy aspect I like, one also found in Paris and Yvress; thus its appropriateness for this time of year. Like another wintertime favorite of mine, Clinique Wrappings, it is both cool and warm, the equivalent of flushed cheeks coming in from the cold or the sensation of your face heating up after a few cocktails. Jaipur is the punch at the Christmas party, and someone, bless him, did us the favor of spiking it.
Posted by Brian at 12/21/2010 09:33:00 AM

A have a mini of this that I've never tried! Thanks for the recommendation. And you make a great case for nudity.

I too have a mini -- it's very bright and strong and very Grojsman! I didn't know she did Bulgari pour Femme -- I was just giving that another shot this weekend. I love it up top but when I've tried it on skin before, it developed a diaper bag accord after 10 minutes or so. This time that didn't happen, but it was overpowered by other things I tried so I still don't really have a sense of how it wears.

I remember in the Guide Turin said somewhere that he thinks Roucel does his best work for minor projects.

I was at a Macy's this weekend that still had two Wrappings gift boxes, but no tester, and I decided not to buy unsniffed. Wish I could have tried it!

I have a full bottle and always forget about it. This morning I saw the box there and thought I'd take it for another run.

I really love Bvlgari Femme as well. I will say I've noticed in more recent bottles of Grojsman some weird notes toward the bottom, causing me to wonder what exactly reformulation does to her work. It can start out very rich and end pretty coarse. Thankfully, I mostly have older versions. I believe my bottle of Jaipur dates to the fragrance's time of release. Not so with Tresor, which goes a little weird eventually on me.

I remember Turin saying that. Have you smelled the Bond No.9 Roucel stuff? Broadway Nite is one of my top twenty. And H.O.T. Always is pretty spectacular too. BN reminds me of a Grojsman fragrance from the eighties.

Did you ask the SA's for a tester? The mall here had one in a drawer. I guess because it's not something people tend to buy unsniffed. They come looking to restock.

Tresor turns my stomach, but I wonder if it's just the current version.

I love Broadway Nite! I think it's what Lipstick Rose wishes it could be. I also like New Haarlem though it pretty much smells like maple syrup to me. I have not smelled HOT Always yet. The one I *thought* I would love and didn't was Musk Ravageur -- too much woody amber.

I did ask, and she said no, but maybe she was just being lazy/stupid. If I wasn't already on a gift-shopping spree I might have just plunked down for it.

Oh Don't plunk down. When I send you something I'll include a decant of it if I can find a little vial.

I love the old Tresor. I don't have an old bottle but I love it so much I'm willing to wear it just for those opening bars.

You no likey Lipstick Rose? I like them both a lot, though BN alone makes my top 20. I'm sure my top 20 is more like 50 and lies about the number the way aging actresses shave years off their ages.

I found Lipstick Rose way too sweet, initially, which is what often happens with aldehydes for me, but Broadway Nite, obviously, is just as sweet if not more so -- but I think it has much more depth and soul, so it wins me over despite being sweet. It's like an extravagant drunk.

I'd like to think that you will love Wrappings because, though it has aldehydes, they aren't the No.5 variety but the White Linen stock, but we'll see.

Lipstick Rose is fantastically gaudy to me. I love every minute of it. It's like the champagne wishes and caviar dream version of Coty Ex'clamation.

I can't handle Musk R. I just can't do it. I smell nothing, for one. I guess that's really the end of the story, then.

BTW, I have talked to several people who saw Black Swan and thought it was the worst movie ever. I am so confused now.

Oh, and another perfumer I think works best on a smaller budget: Kurkdjian.

While I like the Maison Kurkdjian scents a lot, they seem so wan in comparison to something infinitely rich and dense like silly little cheap-o Fleur du Male.

Absolue pour le Soir is gorgeous but so very anorexic. It's like that beautiful woman whose stomach you hear growling like a caged beast when you encounter her off the magazine page.

Nor can I smell Nahema or KM Peau de Peche.

Brian, I have a feeling I'll like Wrappings too -- we shall see indeed! You can't smell Musk R?! You must be anosmic/hyposmic to the woody amber that I am clearly hyPERosmic too, because it feels like an ice pick to the frontal lobe and I can't smell anything else.

Mals, no Jaipur or Peau de Peche?! Must be the damascwhatevers that smell of apricot/peach? To me they are very strong and very peachy.

Now I am cross with myself , I saw the Jaipur bottle ages ago .I liked the bottle and meant to test it but wandered off and forgot. I agree with Elisa about Lipstick Rose yet I so wanted to love it . I also agree about Broadway Nite which I have in the 100mls but is tucked away in a drawer so I must get it out now.There is some good news on the Portrait of a Lady front though . I can smell it now for a while at least ( sinus no doubt ) and Octavian was so right it is Indian Bazzar not really oriental like I think of it .

Angela, do tell more. Indian Bazaar? In what way?

Peach, I guess, then, Muse? I have way more Nahema than I'll ever need but when you run across 6 oz. tester bottles, well, you know...

Elisa, no, I can't smell it. And all the fuss about it totally baffles me. How can something which offends so many people not register for me? And it's Roucel! Which makes no sense.

Brian, how do you feel about Coromandel? Because it has a similar, if not the same, woody amber material that is really unpleasant for me.

I really like it, although I wish it lasted longer. Actually, it lasts, just not as forcefully as I like. I feel most all of the Chanels aside from Coco are basically colognes.

Very few musky perfumes register on me. There are several floral musks which do: Vivid, Versace Woman, Rumeur. People of course hate all these, though I hear Vivid is the number one selling fragrance on Amazon. Take that, No.5!

I agree about the recent Chanels on the quietude front.

"The luck can adhere to you better" naked. Lol. Excellent.