More Perfume in the Movies: The Last Picture Show 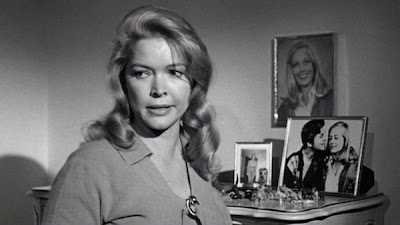 There's a great scene early on in The Last Picture Show (Peter Bogdanovich, 1971) between Cybill Sheperd and Ellen Burstyn, who play mother and daughter in a small, stifled Texas town, circa 1951.

Teenage Cybill is alone in her frilly bedroom, reading a book on her bed while absently stroking her cat. Her mother, played by Burstyn, walks in, and Cybill immediately stomps to her vanity, where she faces the mirror, presenting her back in adolescent contempt to the parental intrusion.

Burstyn tells her she's foolish to spend so much time with her boyfriend, Jeff Bridges, who will never amount to much. He has no money and he'll never make much of himself, and she's too young to realize what being stuck in town the rest of her life will do to her.

Cybill says money doesn't seem to have made Burstyn very happy, and besides, when she married Cybill's daddy he had no money. Burstyn says she basically scared him into making something of himself. Cybill says Bridges can be made scared too, and Burstyn laughs, telling her daughter she isn't nearly mean enough to scare anybody, least of all a boy.

Burstyn is as well dressed and pretty as her daughter, with a harder edge, and it's obvious where Cybill's looks and her obsession with them came from. At one point, Burstyn approaches Cybill and grabs a perfume bottle off the vanity. She sprays it on her neck and Cybill says in disgust, you have your own, suggesting they share the same taste in fragrance.

When her mother leaves, Cybill stomps back over to the bed and flings herself on it, after unceremoniously tossing the cat off, through with the girly stuff.
Posted by Brian at 8/16/2012 11:31:00 AM