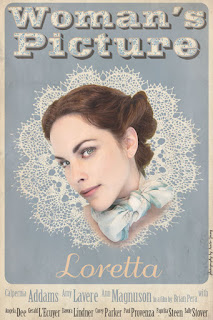 When I first smelled Loretta, a little less than a year ago now, I wasn't prepared for it. Andy Tauer and I had been discussing Miriam, the first fragrance in the Tableau de Parfums line, for some time by then, and I'd had some time to get my mind around that one. Loretta was a sucker punch, and seemed to come out of left field.

Miriam, as some of you maybe know by now, was inspired by the character in a film series Andy and I have been doing together, Woman's Picture, and it speaks directly to the character of the same name played by Ann Magnuson.

Miriam, the woman, is heavily influenced by the past. Gripped by it, really. Her life is at a crisis point and she looks back to the past for comfort, maybe in a distorted way, certainly nostalgically; like a lot of us she looks back and selectively chooses to remember the good parts. She filters out the things she'd rather not carry forward with her pretty aggressively. The fragrance associated with her character is an interesting dichotomy and speaks to these conflicted feelings, paying homage to classical perfumery from a distinctly modern vantage point. Full of grand gestures, accented by sweet, bright moments, Miriam walks into an old, dim room where the past is all around, and throws open the windows to let the sunlight in.

All of the characters in Woman's Picture thus far are pretty complicated. That's a central premise of the series for us, I think: women, people, are much more complex than our impressions or accounts of them would lead us to believe. It can be difficult to see them as they are, watching so closely only for things we can handle and recognize. Loretta, played by Amy LaVere, is maybe the most perplexing woman of all in this series. Part femme fatale, part guileless child, her motivations are opaque, and reading her can be a bit bewildering. It's unclear why she does what she does. There are no concrete signals with her. Her face, and her persona, are totally inscrutable.

I couldn't imagine how Andy would translate her world into a scent. I might have been doubtful that he could - that anyone, even a talented, perceptive perfumer, could. Without giving me advance notice, Andy sent me a sample of the Loretta fragrance in progress. We were in the midst of trying to find words for Miriam, making our decisions about what that fragrance meant, how it might relate to its namesake character, how we might communicate all that. My mind was consumed by those issues and challenges, and when Loretta arrived in the mail I was in deep in Miriam's "voice".

I opened the package in my car and spritzed some on my hand, and was blown away. I'm not sure how he did it, but Andy translated all of Loretta's tricky, deceptive complications into a scent. It was the first time in a while I'd been surprised like that by a fragrance, left without words to describe what I was smelling, and yet the fragrance was so emphatic that it seemed like it couldn't have been anything else, however unexpected. Immediately I was frustrated. How would I manage to refrain from talking about it for months to come, until its release in September of 2012? Asking someone who loves perfume not to talk about something so fantastic seemed pretty unrealistic to me.

To say that Loretta is a tuberose fragrance is to me like calling Notre Dame a building. It isn't that it's a large fragrance particularly. In some ways, it's quite soft. I wouldn't say it's grand in the way, say, Miriam might be. Like Cinnabar, for instance, Loretta has a smoldering, fuzzy warmth to it. The tuberose is laid out on a bed of woods and spices, and has a dreamy, moody quality. Like Loretta the character, it's wrapped up in its own fantasies. Andy has called Loretta sensual, and it is that. I would say voluptuous. It has some of Loretta the character's sweetness and childlike qualities - a bit of fruitiness throughout. But the sensuous aspects make it feel very adult and mysterious, and the plum note feels decidedly forbidden.

I'm a fan of tuberose, but this is no Fracas or Carnal Flower. Those scents, for me, are principally bright, however creamy the former, however rich and complex the latter. Loretta is a different kind of sensuality and a different kind of tuberose, like nothing I've smelled before. It's the first tuberose I've smelled that truly takes things in the direction of dark mystery. I'm hopelessly biased when it comes to Andy, of course, but can tell you this is not only a different tuberose but a different Tauer. It's one of my top five fragrances of all time, for reasons I'm probably just as hopelessly unable to describe.

I was excited when Andy offered to make the fragrance available for our kickstarter campaign for ONLY CHILD, the second feature length film in the Woman's Picture series. We begin shooting the film in April, if we can meet out kickstarter goal by the deadline on March 29th. Excited because for those interested in smelling the fragrance a little early, it can be shared, and I might have people to talk about it with. Excited more than anything because it's one of my favorite fragrances and I think it will surprise others as much as it has me.

The fragrance won't be available to the general public until September. There are 16 days left in our campaign to get a sneak sniff. The help and support of perfume lovers is most important to us, as we make these films for you really. Your encouragement and support is invaluable to us, and we've tried to come up with incentives in the kickstarter campaign that will work hard to repay you in advance for your support of our efforts.

If you haven't visited the page lately, please check it out here.

We've added Loretta and several other fragrant items (two more soaps by Andy, as well as the opportunity to get a full bottle of any fragrance in the extended Tauer range at a discount).

For the next 25 days, Dark Passage, a limited edition fragrance by Andy Tauer made exclusively for the Woman's Picture series, will be available here. 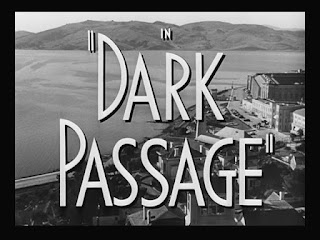 Dark Passage is a film noir fragrance, and is presented as part of a new series in the Tableau de Parfum/Woman's Picture project called "Snapshots".

Packaged in 7ml enamel atomizers and available in limited edition quanities, the Tableau Snapshots are smaller in scale, providing Tauer the opportunity to experiment with new ideas. The snapshot fragrances are hand held, and seek to preserve fleeting moments in time.

Dark Passage is being presented for only the next several weeks as part of the kickstarter campaign for ONLY CHILD, a mother/daughter noir in the tradition of Mildred Pierce and Now, Voyager starring Grace Zabriskie (Big Love, Twin Peaks) as a mother searching for her vanished daughter. ONLY CHILD is the second feature film in the Woman's Picture series. We start shooting it in April.

I was always resistant to do a kickstarter fundraising campaign in the past, but this time I wanted to do one, as long as I could do one well. When I say well I mean a campaign that includes true incentives, rather than well-intentioned "thank you's" alone. When I started looking at kickstarter campaigns before building our own for ONLY CHILD, I was surprised to see that people didn't offer more for donations. After all, you're asking people for help. If you're making a film, you're creative, nine times out of ten. Why not pull together all your creative resources and come up with something that really thanks them?

Andy and I came up with a lot of incentives for your average person who can do without perfume but loves film. But we wanted to do something extra special for people like us who love fragrance. I was so happy when I first smelled Dark Passage, because in a sea of mass marketed banality I knew it would feel special, smell special, be special, and few things feel that way anymore. We would be forever grateful if you helped us out with this film. Like Woman's Picture it deals thematically with perfume. I make these films for you. I really do. If you like them I know I did good. But in addition to our gratitude and making a good film we want to offer you something else in return.

Noir films are typically black and white. Dark Passage isn't quite so polarized, but it contains equally bold contrasts. The wonderfully rich, refined patchouli used by Andy in the fragrance is something to behold, at once earthy and clean shaven. Birch tar and cacao move this patchouli theme in interesting directions, evoking the open road and the small town diner, steaming cups of coffee on a formika countertop, bright sun coming in parallel lines through window blinds, crisscrossing a dim room with their highly keyed stripes. DARK PASSAGE is both femme fatale and private eye, a happy union between feminine and masculine.  It speaks in Lauren Bacall's smoky baritone and regards you with Bogart's level gaze.


Andy Tauer has made the fragrance available this one time and this one time only in an effort to help raise the kickstarter goal for ONLY CHILD and help get the film made. After the campaign, Dark Passage, like a fugitive character out of noir, will never show its face again.  Please check out the kickstarter page to see what other things are available for your donation (hint: an exclusive soap built around tuberose) and comment on the page if the mood hits you. With any donation above 15 dollars you'll get an online link to Woman's Picture, our first film.

Note: surprises are coming there in the next week or two, including a sneak peak sniff opportunity or two.
Posted by Brian at 3/04/2012 07:39:00 PM No comments: