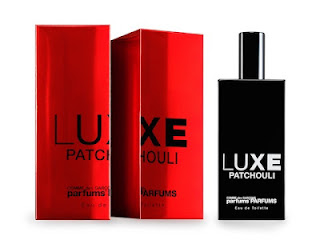 Several years ago, traveling back from a film festival in Greece, a good third of a full bottle of Luxe Patchouli leaked out into my carry-on, much to the displeasure of the man whose seat adjoined mine. He liked me even less when some of it - or a lot of it, if we go by him - got on my hands. I'd loved Luxe Patchouli from moment one, and finally splurged on a bottle. It was my first international festival and my first film and these seemed like suitable justifications, in case my guilt had plans to put me on trial. I knew Luxe was strong, that it might not be to everyone's taste, but it wasn't until that seemingly endless plane trip that I realized just exactly how...singular the fragrance is.

I have a soft spot for the curry-steeped-in-maple-syrup qualities of fenugreek, which makes Luxe Patchouli a real bonanza for me. Patchouli haters will assure you it is aptly named, but I consider it more of a fenugreek scent than a patchouli proper. Add some pepper, woods, and a little vanilla, and you have something somewhere between edible and earthy. This is a polarizing scent, and consider this: Some of them still should be. I find it extraordinarily nice, but others might recoil. While I'm not arguing for more recoil in modern perfumery, I don't think strong, passionate feelings for or against should be as much a thing of the past as they seem to be threatening to become.

"The characteristic odor of fenugreek extract is a celery-like spiciness, a coumarinic-balsamic sweetness, and an intense, almost sickeningly strong, lovage-like or opopanax-note of extreme tenacity. The diffusive power of the odor of this material is usually underestimated by far."

That gives you an idea why the guy next to me was crying.

This description would scare off many, even though wearing Luxe Patchouli doesn't require spilling it all over yourself and can be used just as wonderfully in small doses as large. The price didn't help the scent's reputation, either, and it has gone practically unremarked. The eau de parfum version is (still) pricey at over 200 dollars for 45 ounces, so I've worn mine sparingly, which is to say rarely. In perfume years, the fragrance came out close to a century ago, way back in 2007.

Now, six years later, Comme des Garcons, who have been on an upswing creatively of late, have released both Luxe Patchouli and its companion fragrance, Luxe Champaca, in eau de toilette versions. At over 100 bucks for 100 ml, the fragrances are still arguably cost prohibitive, but compared to the originals they seem practically free.

I was worried that the EDT version of Luxe Patchouli would be - I don't know - 'effervescent'? Tastes since 2007 have nudged then shoved patchouli away from its dread grunge origins, making it ever cleaner, smoother, creamier, and otherwise unrecognizable and unremarkable. I think I've actually yawned once or twice smelling some of these contemporary interpretations. Comme des Garcon hasn't always followed trends, and isn't afraid of a fragrance that frightens the horses, but in the recent past they've veered toward tepid if not exactly tame. It's all been a little airy for me. Was there a "modernization" effort involved in the edt? A re-orchestration?

I'm more relieved than someone probably should be over something like this to say that the edt version of Luxe Patchouli is a.) practically identical in smell to the edp, b.) in other words not at all light, and c.) money well spent. It lasts as long, as far as I can tell, if not quite as long, and would have gotten me as much grumpiness on a flight from Greece as I've grown accustomed to. If I notice one difference - if I'm splitting hairs - it's that the fenugreek and patchouli give way in the far dry down to a marked hint of vetiver I don't remember from the EDP. But that's if I squint, and the trade-off is that the opening is lightened just enough that everything I've always loved about the scent rings out more clearly. Let's hope this and Black are signs of things to come from Comme des Garcons, rather than momentary aberrations.

Dressing the Part: What a Dandy Wears


When I first heard about my friend's twin brothers and their obsession with dressing themselves like something out of a Bond film, I asked her whether they wear cologne. I couldn't imagine spending that much thought and time crafting a public persona without scent being a crucial component of your wardrobe.

She said she wasn't sure, so before I headed over to film them, I packed up some of the cologne on hand I thought I might be able to convince them to wear - Hermes Terre d'Hermes, Gucci Pour Homme (2003, natch), Gucci Envy, and Divine L'etre Aime Homme.

There was so much I wanted to bring but doubted I'd get them to try. What could be better for a self-professed, pink-panted dandy than Penhaligon's Sartorial, Caron's Third Man, Yves Saint Laurent's Rive Gauche Pour Homme, or any number of classic man of discerning taste fragrances that come to mind? I'm not about to throw a bottle of Amouage Gold at just anybody.

My subjects, clearly, aren't just anybody. A lot of eighteen year-old guys are obsessed with the way they look. A lot of them spend much of their time and money on clothes. I don't think I've ever met a guy their age whose sartorial interests reference Marshall and Parker's primary influences, let alone one who shares their disregard for the kind of gender inhibitions that keep most men far away from the color pink. It's just as rare in my experience to meet someone their age who isn't afraid to take something seriously and wear it on his sleeve. Fingers crossed they get the scent bug, too. Nothing makes me happier than the thought of someone their age dressed as well as they do, wafting around on the scent of good cologne.
Posted by Brian at 6/13/2013 10:30:00 AM No comments: