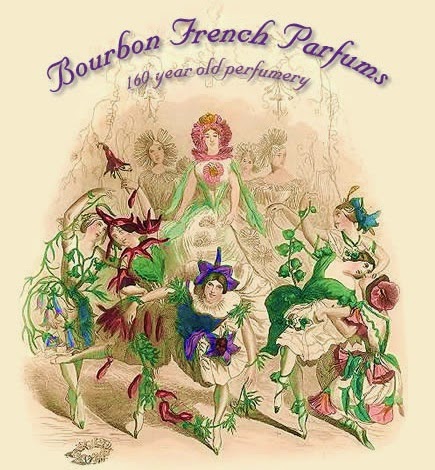 The establishment has since passed through several hands and noses, all of which and whom you can read about on the company's website or hear about, I imagine, if you visit the store in the French Quarter.

The perfumes are, depending on who smells them, either wonderfully old school or old lady, that much-loved term for all things not fairly strictly contemporary. I like or love nearly everything I've smelled, and stand among Bourbon French's many admirers.

It's true the scents recall a different time and probably require some amount of appreciation for perfumes past. It's also true that the history of perfumery is increasingly hard to discern in the changing landscape of modern fragrance, where reformulations have altered the old reliables and prevailing fashion has drastically remapped the rest.

It helps that the pricing is reasonable. It doesn't hurt that you can buy many different sizes and concentrations. The perfumes arrive in velvet drawstring pouches. The labels look like they were printed on a vintage press hidden in the basement of the building. Not much information is provided about the fragrances, which adds to the pleasure of discovering them and enhances their sense of mystery. Several have become personal favorites:

One of the house's better known fragrances, Voodoo Love is earthy, floral, and spicy, beginning with an unusually strong dose of vetiver that bursts forth on the skin and is gradually embraced by velvety rose and jasmine. There is probably quite a lot of patchouli in this fragrance, helping to turn the lights down on those florals, and it could be that the patchouli, and the vetiver, neither remotely clean, contribute to the scent's subtle but pervasive animalic quality. It could also be that there's civet in the mix. If so, it's humming faint accompaniment. I sense clove but could be imagining that, a phenomenon that happens for me with many of Bourbon French's perfumes. I would probably classify Voodoo Love as a floriental, and it reminds me of once-popular, now-forgotten Lanvin fragrance which only exists in my mind. It has great persistence and projection, and the extended dry down is worth waiting for. The scent veers back and forth between accepted ideas of masculine and feminine on the way there.

Imagine carnations steeped in peach nectar. Pour that peach nectar infusion over slightly spiced rose. Mon Idée is the most cheerful Bourbon French scent I've smelled. It doesn't get "carnation" right in the strict sense of the word, and carnation is so ever-present that you might be led to believe that it strives to. What it does get is the feeling of receiving a bouquet of carnations from, say, an admirer, or a loved one - that flush to your cheeks and your senses, the heightened feeling of possibility being noticed or admired can bring, the nearly electric thrum of the colors in the bouquet after this mood filters them to your senses. Mon Idée, for me, is an astonishing fragrance. It's very floral, like another favorite, Perfume of Paradise, but it doesn't have the latter's hothouse vibe, nor its indolic carnality. Mon Idée wafts around in a little pocket of happiness, well being, and radiance which is so foreign to the experience of every day life that smelling the perfume can produce an elated confusion of uplift and heartbreak.

A peach of a very different frequency presides over Romanov. This fruit is slightly turned, an effect enhanced, if not entirely created, by the distinct presence of honey. The peach skin has darkened; its fuzz gone rough. I would say this is primarily peach, rose, and honey, although there is clearly something sturdier going on underneath that core medley; some clove, possibly or even probably some patchouli. Like Voodoo Love, Romanov conjures fragrances that never were but seem to have been. You keep trying to place it. I should add that a common remark about the Bourbon French fragrances is that they are uniformly powdery. With a few exceptions, I don't get the connection. Romanov, Mon Idée, and Voodoo Love could hardly to my nose be called powdery, nor can most of the others, which leads me to believe that I've been right in concluding previously that for many the word powdery is often a stand-in for vintage. That said, while all three of the scents I've mentioned have vintage aspects and at times an overall vintage vibe, they also strike me as better versions of niche scents than the overwhelming majority of niche scents I've smelled in the last few years.

If you find a better name for a fragrance, do let me know. Sans Nom has to be called something, so why not call a spade a spade? The scent reminds me of everything from Opium to Cinnabar by way of Teatro alla Scala, but Sans Nom feels peerless at the same time. The usual suspects are there: rose, jasmine, patchouli, clove. But somehow Sans Nom feels softer than its comparisons. Again, I could be imagining it, but I smell what seems like a lot of Ylang to me. Of the so called feminine fragrances in the Bourbon French inventory, Sans Nom sits second to Voodoo Love as the most masculine in feel. Or does it? I can't decide. It's the only BF fragrance I've smelled that I might call a straight up oriental. Despite it's powerhouse company and notes, it isn't the most persistent fragrance in the line, nor the loudest. It isn't quiet - not at all - but there's something meditative and whispery about it that I don't usually get in orientals.

Other favorites are Perfume of Paradise, the custom blend formerly known as Dark Gift, Patchouli, Vetiver, Kus Kus, and Oriental Rose. Thanks out to Maria Browning of Bitter Grace Notes for introducing me to this line with a very thoughtful and generous care package of samplers.
Posted by Brian at 6/27/2014 02:55:00 PM 7 comments: 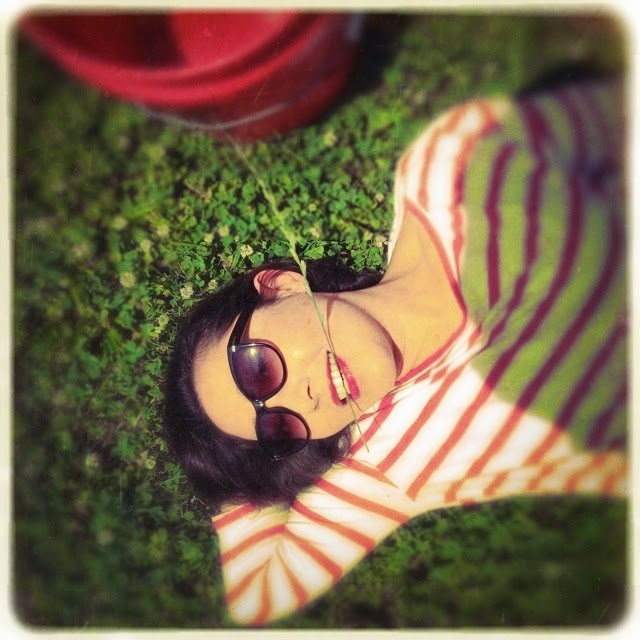 Last week, Barbara Herman (author of the blog Yesterday's Perfume and the book Scent and Subversion: Decoding a Century of provocative Perfume) was in town on her way to a reading in Nashville. When she asked if I might like to head that way with her I said yes, and even though I ended up attending a funeral the morning we were leaving and we plowed carefully and slowly through buckets of rain on the highway to get there, it turned out to be a fantastic trip.

Barbara had a list of things to see in Nashville, but with her reading on the agenda we didn't have much more than a day to tool around. When we walked out of the place we were staying the first morning, the lawn was so green, and the red and white stripes of her shirt looked so good against it, that I asked her to risk grass stains and a morning ritual redo for a picture. She was game and silly about it and that was basically the tone of the trip as a whole.

If you haven't read Barbara's work on the blog or gotten your hands on her book yet, I encourage you to. I'd enjoyed her voice for several years before we met last year at a Scent Bar event in LA, and was surprised at how down to earth she was for a writer, let alone an active blogger. It turns out her actual physical presence is essentially like her writing - good natured, sharp and smart.

Highlights: a rose water-infused iced coffee at a place called Fido; Princess Hot Chicken (where the woman at the counter asked me how hot and I said VERY MILD, Baby steps please, to which she answered, Okay, and come on back when you're ready for the real stuff; smelling selections from Barbara's stash of vintage perfume with Maria Browning (whom I'd met and adore) and Ron Slomowicz (whom I hadn't met, and whose blissful M. Micallef Rose Extreme I smelled before he fully arrived); and staying up late with Barbara to mis-pronounce passages of text in snooty fake accents.

(Photo of Barbara taken by me last Friday morning)