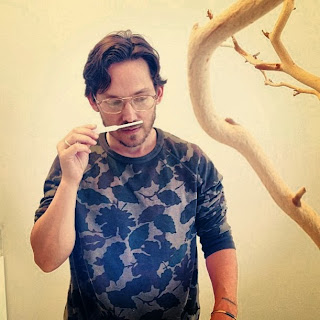 Summer is a real dry spell for me. I can't seem to smell anything, and my skin can't seem to absorb anything fast enough, so I end up wearing a few old reliables, things that will stand their ground against the heat and humidity. Every time Fall rolls around, it's like I'm discovering scent all over again. Everything smells so much...more than it seems to have up until then. Having restricted my diet for months, my own collection suddenly seems like someone else's - everything's new again.

Recently I was in L.A., trying to get excited about things I don't own and hadn't smelled yet. I did find some winners, but precious few. I could rant about the industry and the dearth of originality, but it's slowly dawning on me that my own experience is part of the problem. I've smelled too much at this point. What perfumer, what perfume, can compete with my whorish appetites?

No list can really represent my rotation at any given point. I wear too much to narrow it all down, and I'm not one for favorites, or not for long. I have so much, and like so much, that it's all competing for my affections and interest on a minute to minute basis. But this Fall there were a handful I was more excited than ever to pull back into rotation, or add to my list.

Around the time this came out, Abigail sent me a sample. I liked it but didn't think the world of it until about a year later. Maybe the word oud turned me off, which is silly but at the time and even now is probably an unavoidable reaction against such an ubiquitous trend (i.e. a shorthand for nothing new). Leather Oud is exactly the kind of thing I go for - dash of civet, tanned leather, spices, backbone of oud. It lasts like nobody's business, and does what very few fragrances do for me or on me: as it wears down, it melds with my own chemistry, and anyone smelling it or me by then would assume it's simply the way I smell. This probably contributes to its reputation among some as a B.O. scent. My feeling is that if this is what B.O. smells like, I'm all about B.O. Leather Oud joins Eau Noire as a contemporary Dior highlight for me, hitting a spot that nothing else I own can.

It gets no cheaper than this, yet Jovan Woman is one of my favorites. It's a clean, musky smell with great projection and longevity. For the longest time I was anti musk, mainly because I couldn't smell it. Even the allegedly stinkiest musks failed to persist on me. That changed with Parfum d'Empire Musc Tonkin, one of the best things I smelled last year. Jovan Woman has none of Tonkin's feral stealth. But Tonkin opened my mind to musks in general as fragrances which were worth my attention. I like Jovan Man as well, though it has a synthetic edge that puts it firmly in second place. Many I suspect would find Jovan Woman too soapy at the very least, and old fashioned at best. I keep going to it. For whatever reason, it instantly lifts my mood. No one calls this musk. Fragrantica classifies it as an oriental spicy. Maybe I'm imaging things. Maybe it's the supposed nutmeg and coriander that gets me every time. Regardless, I smell it and think "musk".

I like many a Montale, and as much as I roll my eyes at the mention of Oud, I'm drawn to more than a few practitioners. Oud 27 is for me in a class of its own. I don't know of any oud that smells quite like it, or that gets anything close to the reaction I have spraying this on. I first smelled it on a friend. I walked by her and the smell stopped me in my tracks and forced me into an about face. Like Musc Tonkin it has a decidedly feral bent, and musky underpinnings. Like Leather Oud, it's robust. Think Civet City. But the comparisons stop there. Oud 27 doesn't always last as long as I'd like, but I have no complaints, because while it does stick around it bares its teeth so hard nothing much else can come close.

Now that Opium is no longer Opium, and Cinnabar is slightly less than it once was, I turn to Charlie Oriental, a short lived oriental which for me arguably smells as good as either ever did. There's a fruity aspect to Charlie Oriental that even the vague peachy facets of Cinnabar don't approach in terms of pushing the right buttons. It adds to the Opium/Cinnabar format a unique juiciness. The jade bottles I bought off Ebay are sticky, their weird rubbery coating gone bad, and application is by mist rather than spray. These are small things but annoying enough to count out a lesser fragrance. Charlie Oriental is rare online but you can find it at fairly affordable prices. I hesitate to mention this, lest the prices go up. But I've never heard anyone talk about this hidden gem and it deserves more attention. No relation whatsoever to the original, iconic Charlie.

I'm a fan of the line and have three or four I'd gladly own, but if I could have only one Smell Bent fragrance (hands down, though closely tied with Prairie Nymph) this would be it. Chocolate, cassis, patchouli, and I have to believe a whole lot of cinnamon, though I don't see it listed. Supposedly, a cannabis component, making this a sort of abstract pot brownie. The stuff is amazing, with so many things I admire going for it: longevity, just the right amount of complexity, projection, tenacity, all presided over by a healthy sense of humor. A bit much for some, probably, but not for anyone I'd expect to have much fun with.

Call it a chypre. Say that the recently re-issued version is a ghost of what it was. I have three bottles of the stuff, from way back when, not so way back when, and just the other day. It's true, to my nose anyway, that it's gotten a little paler, but I'd wear any of those versions, happily. They all last on me, though the most recent version has less of the fragrance's former ambery warmth. To me, Sublime is all about amber and orange blossom, and take any version you like: there's nothing else quite like it. The most common complaint is that there's some kind of hairspray thing going on in there. Never smelled it myself.

Belinda Carlisle, knowing apparently next to nothing about niche fragrance, walks into Scent Bar and after scanning the shelves, sees Gothic II. "Oh, you have Loree Rodkin?" she says, instantly at attention. Loree Rodkin is well known in name dropping circles closed off to me, but among people who love perfume she holds no real sway. In theory, Gothic II is cutting no new ground: amber, patchouli, vanilla, repeat. In practice it's kind of its own ball of wax - or can of worms, depending on your tastes and aversions. After wearing it for a few weeks I decided I would list it, if asked, as Headshop Gourmand. You have to like Nag Champa, and you have to like patchouli. I more than like both, so I've got no complaints. I would fight someone for the last bottle on the shelf.

Vikt competes with this one for my affections. Both persist like nobody's business. Vikt to me is something like licorice oud. Every time I smell it I think, no thanks. Then I spray it on and the whole story changes. I can't get enough. But my soft spot is for Norne, which is, apparently, fir, spice, and incense but might as well simply list fir. That's not an underhanded compliment. For years I wanted the perfect fir fragrance. Many scents featured something "along those lines." Only Norne seemed extracted directly from the sap of the biggest fir tree known to man. Strangely, on me, while not subtle, it's nowhere near bombastic. It's brooding and insular in ways I appreciate, and the closest to a comfort scent something extracted from the bark of a tree could get.

For a while - too long, if you're asking me - bread or rice notes were all the rage in their tiny but tedious way. Maybe they still are, and they're a just tiny enough distraction for me to put out of my head. Great, a rice note. Let's move on, to paper, or computer screen, or bottom of my shoe. Achieving a rice note seems a little like winning fourth place in a cornbread competition to me, so my attention wanes at incoming reports of the latest 'winner'. First place might be the only place that counts when it comes to cornbread. The rest is simply good cornbread, and everyone moves on to the chili. There was a time Etat could do no wrong with me. Then came Like This, which was like, meh, to my nose but won over many people. Then comes the rice note, and I'm thinking of cornbread. I wasn't prepared, in the midst of all this, to think much of Bijou Romantique, and very few people will probably tell you it's the best thing ever, I suspect, in that it reminds of many other scents past. I love it, and when I smell it, all is forgiven. Like Sublime, it's mostly about amber for me, but in a very different way. I've heard people praise the beginning and bemoan the finish. It never disappoints me.

I can guarantee you I think that this fragrance will always feel new and important to me - and by that I don't mean to say the weakened version Lauder is now selling but the stockpile I have from several years prior. I will probably always consider this, when forming a list, no matter what season, and will open the box like a well-considered gift sent to me by someone I'd given up on who finally managed to surprise me.