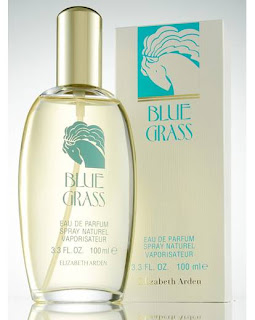 Bluegrass was launched by the design house of Elizabeth Arden in 1934. That seems odd to me, I thought it was a 1970’s fragrance. I guess that’s because I was most aware of Bluegrass in the 70’s and early 80’s. In addition to a beautiful honeysuckle perfume, my grandmother wore Bluegrass.

When I was a child, I thought my grandmother smelled so good. My grandmother didn’t have much money at all, so she wasn’t able to wear glamorous clothing or jewelry or makeup, but she always look good, “neat as a pin” she would say, and she always smelled fresh. Sometimes she made her own clothing and other times she would buy simple items from discount stores that she would dress up with a scarf or a pin. She never looked wealthy or sophisticated but she always carried herself well and was kind, charming, extremely neat, clean and precisely put together.

In the spring I think of my grandmother more often. She loved the bright yellow forsythia bushes, the daffodils (which should called jonquils – are they different?), tulips and pansies. She never had a car or her driver’s license so she walked everywhere. In the spring she would walk into town and do her shopping and always pick up cards to send to her grandchildren, usually with a few dollars tucked inside.

Perhaps not surprising for a perfumista but one of the most vivid memories I have of my grandmother was her smell. I didn’t even know she wore Bluegrass until a few months ago when I asked my mother if she knew what her perfume was called. Bluegrass, said my mom. Recently I saw Bluegrass at a drugstore for $15 so I bought it. I came home and couldn’t wait to spritz it on, to see if it smelled as nice as it did on her. Well, it doesn’t smell good. It smells an awful lot like laundry detergent and a strong fresh greenish floral fragrance. It made me so sad. My grandmother probably wore Bluegrass because it was available at the drugstore and affordable to her. But then I realized I shouldn’t be sad. I always thought she smelled so good, and surely everyone who knew her did, too. Maybe Bluegrass, like everything else, has been reformulated. Whatever the case, it smelled beautiful and fresh on her.

I like to think that having the great sense of humor that my grandmother did, she would find it amusing that I bought a bottle of Bluegrass that is currently being used as a bathroom air freshener. In fact, it’s a fantastic bathroom freshener, far superior to Lysol or any of the other scents created to mask yucky bathroom odors. Bluegrass doesn’t just mask the scent in a room – it takes over! It’s clean smelling and lingers for quite a long time. Perhaps it’s on the pricey side for an air freshener but in a silly way I’ve been thinking so often of my grandmother lately – and getting a chuckle when that fresh & clean smell wafts down the hallway from the bathroom.
Posted by Abigail at 4/16/2009 10:15:00 PM

Many years ago my Mum wore Bluegrass but she does not now because she says its changed! Like most things ....rrrrr.
Jonquils are the ones with the perfume. Now some people hate their smell but I like it.

I thought it was one of those not nailed down terms, "jonquil." I had learned that jonquils were a southern name for daffodils, and that the term had come to refer to daffodils that did well in warmer weather climates. (I have some traditional King Alfred types fading in a vase right now that smelled just lovely...)

I've never smelled Bluegrass...or, at least, don't *know* that I have. I know what you mean about having a clear scent memory, though.

On the topic of cheap scents that can be effective at taking a room hostage...last summer, I scored a cheap bottle of Sand and Sable (cheap being a very inexpensive relative term when it comes to Sand & Sable), and found that, like your experience with Bluegrass, it made a fine "take over the room" scent. It was like living inside a Willy Wonka white flower. ;)

In the south, we use the word jonquil the way people in other places use the word daffodil, if that makes any sense! Was your grandmama southern?

I love your blog, honey, and have never been brave enough to post, but I am thinking of my own sweet grandmama today, and just had to leave a comment!

I am in Australia and we have the big daff's that are all yellow or combo of yellow and white and then there is the jonquils - they flower first and the flower head is small with a tiny centre cup , with a wonderful scent. Daffodils have no scent.
I once bought a bottle of Roma which I used to love but ... either the bottle had "turned" or they had fiddled with the recipe (or it could have been me - me no likey anymore) - anyway - it made the best room deodorant!
Tell me ---- why is it that your fav scent does not hang around like the ones you hate??? LOL

I have a feeling Blue Grass has changed. I'll try it next time I see it. I think I remember what it used to smell like (my mum wore it occasionally).

I've never used a perfume as a room spray, but I've done the other way around. Ormonde Jayne used to make room sprays which smelled pretty good on skin.

You are all so cute to debate the difference between jonquils and daffodils! :-) My grandmother was not Southern, she was born and raised in Massachusetts so an old Yankee by Southern terms (!).

I do think Elizabeth Arden must have changed the formulation of Bluegrass because it was never so strong and harsh on my grandmother. And it's still working beautifully as a bathroom air freshener - the strongest one ever. I've gotta hope my grandmother is reading this and laughing to herself...

Just found your posting when I was ordering some Blugrass at the EA website. I have been wearing this fragrance continually for the last 32 years and can assure you it has not changed at all. However if you bought a 15 dollar bottle at a drugstore it was obviously expired since the eau de cologne is much more expensive than that whether I purchase it on line or at Macy's.

Also body chemistry varies. My mom wore White Shoulders and it smelled great on her but headache producing on me. Also when I had a sudden severe infection and was taking 3 kinds of antibiotics for it, all fragrance smelled horrible on me, to me, and to others. I had to wait to get my own body chemistry back before i could put on a fragrance again.

I still get very positive comments on my bluegrass scent, since most of my jackets and such have the lingering fragrance even if i dont apply it to my skin.